I received mine last week and still haven't opened it. I have a Lenovo laptop with an Intel HD 620 video card. I was hoping to use it with my laptop. After reading the mixed comments here, I'm wondering if I should just sell it on kijiji for a small profit since chances are I won't get decent results because of my video card. Any advice?
Dec 5th, 2018 11:57 am

HP Canada is out of Mixed Reality headesets...so nothing NEW for returns if you have a DOA or hardware issue...they will only refund your purchase....

They finally billed me again yesterday and today. I need to return my first one as the cable is making it impossible to use...it cuts out all the time...and when I move its totally blank and loses the video feed. 2nd One seems fine...but will test both alot on weekend.

I called HP OMEN support, actually was transferred there, and they created a new order and shipped it out for a quick delivery yesterday. BUT the emails stated it was refurb only...so I called back today and worked with the rep to get a new one...and thats when we called HP Canada customer service (I got the Omen Tech to stay on the line....which really helped), and then found there are none in stock and they I can only get a refrub thru the OMEN team customer support. The Omen rep was very cool, wanted to make sure I was happy, offered an extended warranty on it, but could not do much else...and no way they can ship a new unit from the US (if they even had any)...so we are destined to get refurbs (unless Omen Rep calls back and states CND has new ones again).

He stated they are the same as NEW....totally checked, remade using new parts and in excellent quality...so I will see and make my decision after it arrives in a couple days.

Here is a picture of the two different shipping boxes I received...I first thought the one that slid into the case was potentially a refurb...as there was consumer tape holding the external cardboard sleeve onto the case...but I think that was to keep it from sliding off, and I rechecked the internal box tape...and it was intact and looks normal.

So I would say both units are new...but from different manufuacturing runs..and hence the different boxes. 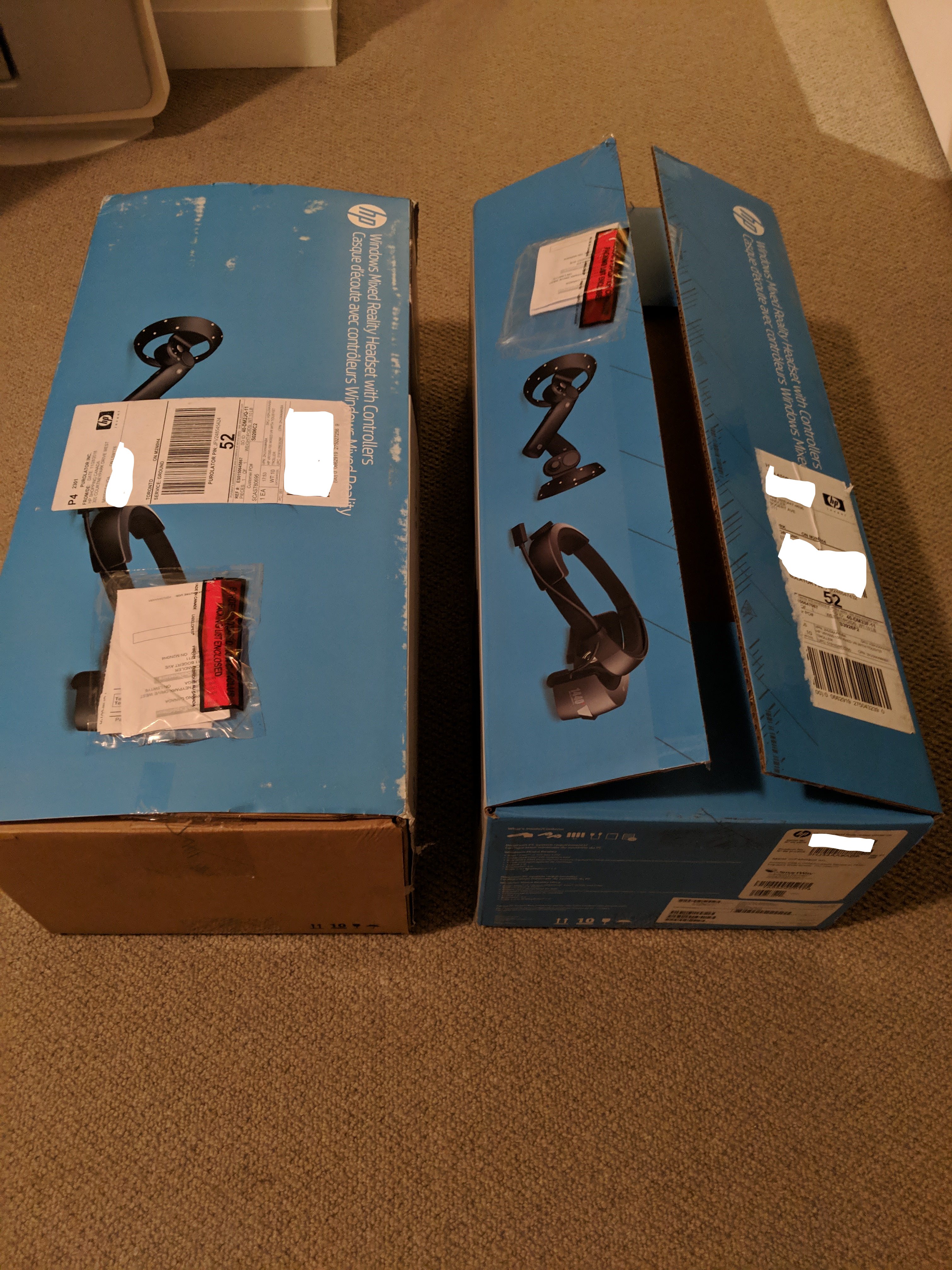 Well someone is going to get mine, as I am returning it. No plastic wrap was removed except for the eye piece covers which have been put back on, its just too blurry for me, and very uncomfortable with my glasses.

Was only used for 1 hour and its back in the box.

Donald05 wrote: ↑ Well someone is going to get mine, as I am returning it. No plastic wrap was removed except for the eye piece covers which have been put back on, its just too blurry for me, and very uncomfortable with my glasses.

Was only used for 1 hour and its back in the box.

Side question, what did hp show up as on your credit card, I cannot seem to find it.

need to visit the laser eye thread lol. not designed to wear glasses with these. the majority of population don't wear glasses. maybe look for a spacer for glasses maybe able to get it to work.

Got mine today too!

I actually bought it as spare controllers for my Lenovo (which has a much better display) - in case my kids break one of the original ones - but I'm thinking to also use it to setup at a local retirement home ala youtu.be/l7TZit7tKPA?t=54 . Could be fun!

Question: It's not available online. If I call HP, would I be able to order a refurb on the phone or no? Anyone dealt with anything similar?
Dec 7th, 2018 4:18 pm

Sadly, it would appear that mine is DOA (after all this

Did anyone purchase the headset just to have a spare set of controllers that would sell me JUST the headset?
Dec 14th, 2018 6:45 pm

Was actually impressed with this unit, have used the Vive and oculus rift before. Going by what some have said how bad this was, was impressed and for price of $140 very happy with it. Now it's not
at same level of of those but its good, it also fits my big head and glasses. Standard glasses.

I just went online to check my warranty seeing I've had issue with both my units (mainly the cables), and it they started one of my warranties in Dec 2017...which is nutz...so it expires in Jan.

I'll call them to get fixed...anyone who needs to contact them call this number, its a direct line to the OMEN product support and they look after the WMR.

If anyone has buyers remorse please let me know. I wouldn't mind picking it up

(toronto area)
Reply to Thread
Back to top
Top