Saw this at the Superstore:

GRAND PRIZE: There is one (1) Grand Prize available to be won, consisting of a trip for two (2) people (the winner (the “Winner”) and one (1) travel guest (the “Travel Guest”)) to Dubai, United Arab Emirates (“UAE”), including: return economy airfare for two (2) people departing from the Canadian International airport nearest the Winner’s residence serviced by Sponsor’s air transport provider to Dubai, UAE; three (3) nights’ accommodation based on double occupancy in a 5-star hotel as selected by the Sponsor located approximately 20 to 25 kilometers away from the Dubai downtown area and two (2) general admission entry tickets to the Burj Khalifah's 124th floor observation deck. The approximate retail value (“ARV”) of the Grand Prize is $3,300.00 (CDN) based on a Toronto, ON departure and may vary depending of city of departure. Any difference between such ARV and the actual value of the Grand Prize as taken will not be awarded.

If desired, the Winner will have the option of taking $3,300.00 (CDN) in lieu of the Grand Prize described above, which will be issued in the form of a cheque made payable to the confirmed Winner as his/her name appears on the Release Form (See rule 7).

HOW TO RECEIVE A CODE: There are two (2) ways to receive a Code:
With Purchase: During the Contest Period, visit a participating LCL (Loblaws) store or other participating retail stores across Canada and purchase a Chocodate™ product containing a Code inside (see rule 18 for participating Chocodate products).

NPE: To request a no-purchase Code, on a plain piece of paper, hand-print your full name, complete mailing address (including postal code), daytime telephone number (including area code), write a 50 word essay on “Why Chocodate is my Preferred Brand”, include a self-addressed postage paid envelope and mail to: Win a Trip for 2 to Dubai Contest (Request for Code), Dept 3477, Box 9500 Lakeshore West PO, Oakville ON, L6K 0G4. Requests must be received on or before August 15, 2016 to allow sufficient time for postage. Limit of one (1) Code mail-in request per outer envelope with sufficient postage.

Interesting, I've never even heard of that product.

I think I'll wait to see if Canada Post strike happens for the NPE on this one. May not get a code back in time if it happens.

Never heard of this product either.

To make it easier for those who will look for it in store, it looks like this: 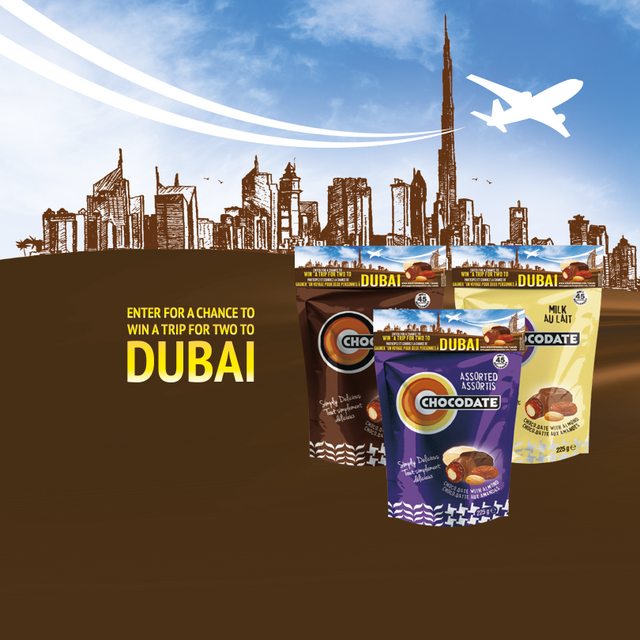 Tracydeanne wrote: ↑If anyone finds it, can you pls post where and price?

Yes it is! I went this week-yellow tag in Superstore-$4.68! they are super delicious though. DISCLAIMER: I am NOT affiliated with them

Rosibal wrote: ↑Yes it is! I went this week-yellow tag in Superstore-$4.68! they are super delicious though. DISCLAIMER: I am NOT affiliated with them

What's not to like about chocolate and almonds! Think I'll wait for a sale though.

Tracydeanne wrote: ↑What's not to like about chocolate and almonds! Think I'll wait for a sale though.

Contest marketing strikes again, we'll all be addicted to these things.

Got my NPE code today, came back pretty quickly.
Reply to Thread
Back to top
Top