How much do downsized aftermarket rims impact resale?

I recently bought a CX-5. I changed from the stock 19s with garbage tires to light weight 17s with premium all weather tires. (Super happy with that decision, although TPMS sensors made it far too expensive.)

I was planning on selling the current tires and rims ($900?) but I'm worried I'll lose money down the road if I go to trade in. I have no immediate plans to upgrade, but the future is always uncertain.

One alternative would be keeping the 19s in storage, putting them back on the car at time of sale, and selling the 17s on craigslist.

How far down the roads ? In 10 yrs time, the buyer could not even care

booblehead wrote: ↑ How far down the roads ? In 10 yrs time, the buyer could not even care

On the one hand, the car is high volume and will have lost half its value in that time so I can't imagine it mattering.

Going from 225/55/19 to 225/65/17 will affect your vehicle handling as you are changing the tire stiffness and also the transfer of transmission torque to road-contact force. Such changes do not come unimpeded. 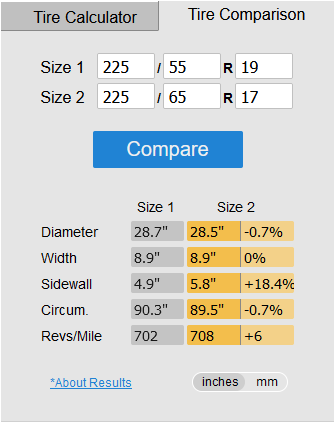 Keep the 19's. They'll be useful when you get rid of the car.

Have to ask yourself...are these wheels/tires 4 year down the line going to make a +$900 different in sale price (the answer is no), so just sell them now while the rubber is fresh.

Most people care more about winter tires being included or not, and since you got All-Weathers, just tell them this is better anyways. All-Weathers are a newish concept but after I got a set of CrossClimate2s for the wife, very much think they are perfect time for all weather conditions in the city (not so much if you live out in the country with unplowed roads, but still pretty good)

eblend wrote: ↑ Have to ask yourself...are these wheels/tires 4 year down the line going to make a +$900 different in sale price (the answer is no), so just sell them now while the rubber is fresh.

Most people care more about winter tires being included or not, and since you got All-Weathers, just tell them this is better anyways. All-Weathers are a newish concept but after I got a set of CrossClimate2s for the wife, very much think they are perfect time for all weather conditions in the city (not so much if you live out in the country with unplowed roads, but still pretty good)

That's my current logic. I'm sure I'd get some more money for the stock wheels, but certainly not $900 plus compensation for storage hassle.

I'm super happy with the all weathers, at least so far. My Blizzak WS80s were amazing in the snow but poor in the wet. Consumer reports seems to agree, e.g.: https://tiresvote.com/articles/consumer ... ires-2018/

Vancouver winters are wet but not cold, and so far the all weathers are much better. I had been basically only running winter tires when there was snow on the ground, because even in wet/dry low single digits my summers were much (on snow or ice it was a gong show). If I was in Kingston I might feel differently.
Jan 19th, 2021 10:03 pm

imo, put the 19's on the car when you sell it. Will be worth more. Sell the 17's separate, or if they need tires by the time you do sell, perhaps put some winters on them and sell with the car or still separate as well....
·Ï¢årµ§·

List the 19s for a fair price. If you get interest then sell them, if you get lowballed or no interest then throw them in storage. On a Mazda truck no one is going to care about getting the OEM wheels if its more than 5 years old. Or if they do its going to minor $ difference. Who cares.

I sold my stock VW Golf R wheels and they're highly sought after so I got a great price. Very happy with my decision to go from 19s to 17s and have no regrets. Didn't want to store a set of wheels for 5-10 years on the off chance I might decide to sell the car. Some private buyers will definitely care, but most dealerships will just ding you an extra $500-$1000 off value and not care at all.
Jan 27th, 2021 7:10 pm

First off aftermarket anything will decrease value, though some buyers (or on trade-ins) they may not notice that much. However some stealers also frown on aftermarket stuff on trades because many tend not to want to have those on the lot so they either are taken with the intention of sending to auction (so less money for you), or they take into account replacing the wheels with factory ones (again less $$ for you).

Secondly something seen as an aftermarket downgrade is even worse, so going from 19" wheels to aftermarket 17" wheels is like a double hit. Don't matter if you swapped out the factory heavy cast alloys for some expensive forged wheels from HRE, OZ, etc., most people/places couldn't care less--they're just gonna see what 90% of other same-vehicles look like on the road/for sale, and then look at yours with the "tiny wheels" and turn their noses.

Personally if I see aftermarket wheels on a vehicle (regardless of type, size, brand) and the original factory wheels are not also included? I'm probably going to keep looking at other vehicles that do. Doesn't mean that I'd 100% not buy the vehicle but I'd certainly look at other examples first and if I came back to the same "aftermarket-parts only" vehicle, I'd expect it to sell below market value. Keep in mind I'm saying this having one car with many mods on it (though in terms of wheels I do still have the factory ones)--but even after spending many thousands on parts/mods, I'd never expect the vehicle to fetch anything other than significantly less than market value unless I put it back to stock. Good news is I don't really plan on selling it. I mean once a car gets over 10yrs old or so, nobody really cares (and stealers typically aren't taking cars for trades period at that old, some stealers draw the line at 6-8 years old). But if you're planning to sell the vehicle after 4 years? Uh yeah definitely keep all the stock stuff and either put it back on the car or provide it with the sale (two sets of wheels is fine, provided one is factory). Otherwise expect to get less for your vehicle, and rightly so.

Mods = lowered value. Now you may find some sucker who thinks mods are somehow worth more and be able to sell it that way, but that's what they'd be--a sucker. Only type of "mods" that may help you are ones that increase the regular functionality and reliability of the vehicle. Anything that enhances performance or alters the appearance significantly? That's gonna net less value. In the case of wheels and nothing else, it might not be that much less, but less nonetheless.

ES_Revenge wrote: ↑ First off aftermarket anything will decrease value......

After doing my own research, I'm pretty sure the non OEM rims will decrease the cars value, but by less than the price I sold the OEM rims for.
Jan 28th, 2021 10:38 am

After doing my own research, I'm pretty sure the non OEM rims will decrease the cars value, but by less than the price I sold the OEM rims for.

My opinion is that the aftermarket rims decrease the value of the vehicle by the amount that it would cost to replace them back to OEM rims. If trading in, whoever looks at it will factor in the cost to bring it back to OEM look/features.

There’s also the intangible “cost” that some may simply choose to not purchase simply because the vehicle has been modified. @ES_Revenge has explained it well so I won’t go over it all again.

All that said, you’ve left out numerous details/variables that would affect future values. The impact if trading in within 2 yrs is higher and quite different than trading in 8 yrs from now. Would you be trading in with tires worn down to minimum or trading in with tires that a less than a year old? Will the tires be one of the top well-known brands or will they be Chinese unknowns? How many kms will be on the vehicle at trade-in is another factor where if kms are low the aftermarket rims will have a different impact than if there 300,000 kms on the vehicle. Similar to body/interior condition, etc., etc.

Bottom line, vehicles are all a losing proposition and it’s a mug’s game to stress over whether you’ll be better off or worse off by $100 or $200 in 5 yrs on a mass market family hauler. Do what you like and enjoy the rims either way.

After doing my own research, I'm pretty sure the non OEM rims will decrease the cars value, but by less than the price I sold the OEM rims for.

Bruv, nobody can say these things for sure but in the earlier years you're looking at $1k less than typical market value for similar year, model, kms, at a minimum; probably more in this case. OE wheels tend to be very expensive to buy new and 19" OE wheels are going to be even more so. If they're the only thing different/missing from the vehicle then maybe it won't be so bad but ditch the wheels and have other things done to it and it's just going to get worse from there.

As mentioned there can be other complications in length of time finding a serious buyer and the possibility that stealer will give you significantly reduced amount on a trade if it's not something they want to put on their lot.