So much info on AirPods online and wireless safety.
People do videos showing insane amounts of RF radiation.
Anyone here have an opinion on the safety of air pods vs say other Bluetooth headphones?
Share:
4 replies
Jan 17th, 2021 9:13 am

This is about cellphone "radiation" but it applies equally well to Bluetooth.

As long as the AirPods/AirPod Pros are not fake, and are genuine Apple, it would have passed Bluetooth class 4 or 3 (**MAX) for wireless earbuds, which is the weakest to weaker forms of Bluetooth broadcasting power with less than 1 milliwatt to 1 milliwatt respectively. Your cellphone will most likely have a Bluetooth class 2 (**MAX) module with a max power of around 2.4-2.6 milliwatt give or take.

There are potentially harmful Bluetooth devices out there, nut mostly are not implemented for general consumers nor will they ever be certified to be used so near to your craniums. The specific devices with the designations of Bluetooth class 1 (100 milliwatt) or 1.5 (10 milliwatt) would be bad on any True Wireless Earbud designs. I mean, sure, it will offer great range (not really need for Personal Area Network that Bluetooth is generally used for), and not to mention the battery life would be absolutely abysmal.

Furthermore, in general consumer Bluetooth devices (class 4, 3 and 2), the power output is multiple times lower than the power transmission that is being sent and received by your cellphone’s cellular modules. Depending on the age of your phone and the network generation the wireless chipset is broadcasting. In the early day of 4G LTE, the power consumption of LTE was heavy, and had a higher radiation rating than 3G UMTS/HSPA. But nowadays with several generations of 4G already gone by, the power consumption of 4G/4.5G is actually much lower than 3G/3.5G/3.9G in general. And both 3G and its derivatives as well as 4G and its derivatives is much lower in terms of transmission power compared to 2G GPRS and 2.5G EDGE.

Wi-Fi 5 and Wi-Fi 6 is is the inbetweener in a sense. Not as powerful compared to cellular, but is more powerful than Bluetooth and IRDA.

This is why taking phones calls with a Bluetooth headset (as long as it is properly certified so don’t buy counterfeits) is safer in the long run (if you make a lot of voice calls) than having your phone right against your ear.

Not to mention, if you live near a cellular tower (like the top floor of a condominium or an apartment building that leases out their rooftops to telecommunication companies for antennas), you will be experiencing much higher dose of background radiation (in theory, and is dependent on penetration coefficient ->> EMR shielding/ceiling & wall thickness/frequency band of the broadcast).
Comparing to Bluetooth in this scenario, the difference is day and night, with Bluetooth being the weakest radiating device of them all.

We know any type of prolonged radiation is not good for us, but the consequence from long term exposure to EMR/background radiation is still not known (technology from the our current life time). Only time will tell the long term impact, and/or inter generational impact this may have on us. The same can be said about the health impact of plastic (like micro plastics in our fresh water supply and the ocean, and how we consume micro plastics from plastic bottles, and micro plastics from down in the food chain by consuming fish and other seafoods).
Jan 18th, 2021 1:55 am

Sorrosh wrote: ↑ Not to mention, if you live near a cellular tower (like the top floor of a condominium or an apartment building that leases out their rooftops to telecommunication companies for antennas), you will be experiencing much higher dose of background radiation

Is it really much higher? The antennas are directional. They are not supposed to produce high field underneath them.
Jan 18th, 2021 2:54 am

alpovs wrote: ↑ Is it really much higher? The antennas are directional. They are not supposed to produce high field underneath them.

Yes, it depends on a number of factor, but in general, whoever does live in the top floor will experience slightly elevated background radiation compared to someone who lives a lower floor, or on the first floor. Every wall (*obstacle depending on the material, such as concrete for building walls, or metal for certain shielding applications) will decrease the amount of radiation by a factor (again dependent on material composition and thickness, as well as the angular orientation of the material in respect to the emitter.

Of course, this is all within human exposure safety limits. The only issue is that this regulatory limit is different from country to country as there is no actual "standard", and such due to the somewhat limited long term study (wireless technology is still somewhat recent as it only came into proliferation during our lifetime, and how it affect us in the long run and our future generations is still unknown, like I said, plastics and micro-plastics are on the same boat for long term effects).
For the time being, there is not much to worry about (in Canada). If you live in other parts of the world where wireless regulatory rules are slack or absent, then this may pose a greater risk.

The amount of power generated by the respective cellular technologies (2G/3G/4G) is dependent on again, frequency bands, # of simultaneous connections at the given moment, and how many cellular towers/modules of are dedicated 2G or 3G or 4G or mixed spectrum are there on the roof top.

This study of RF measurement in apartments within Sweden from a few years ago may be a interesting read.


Some diagrams from the study 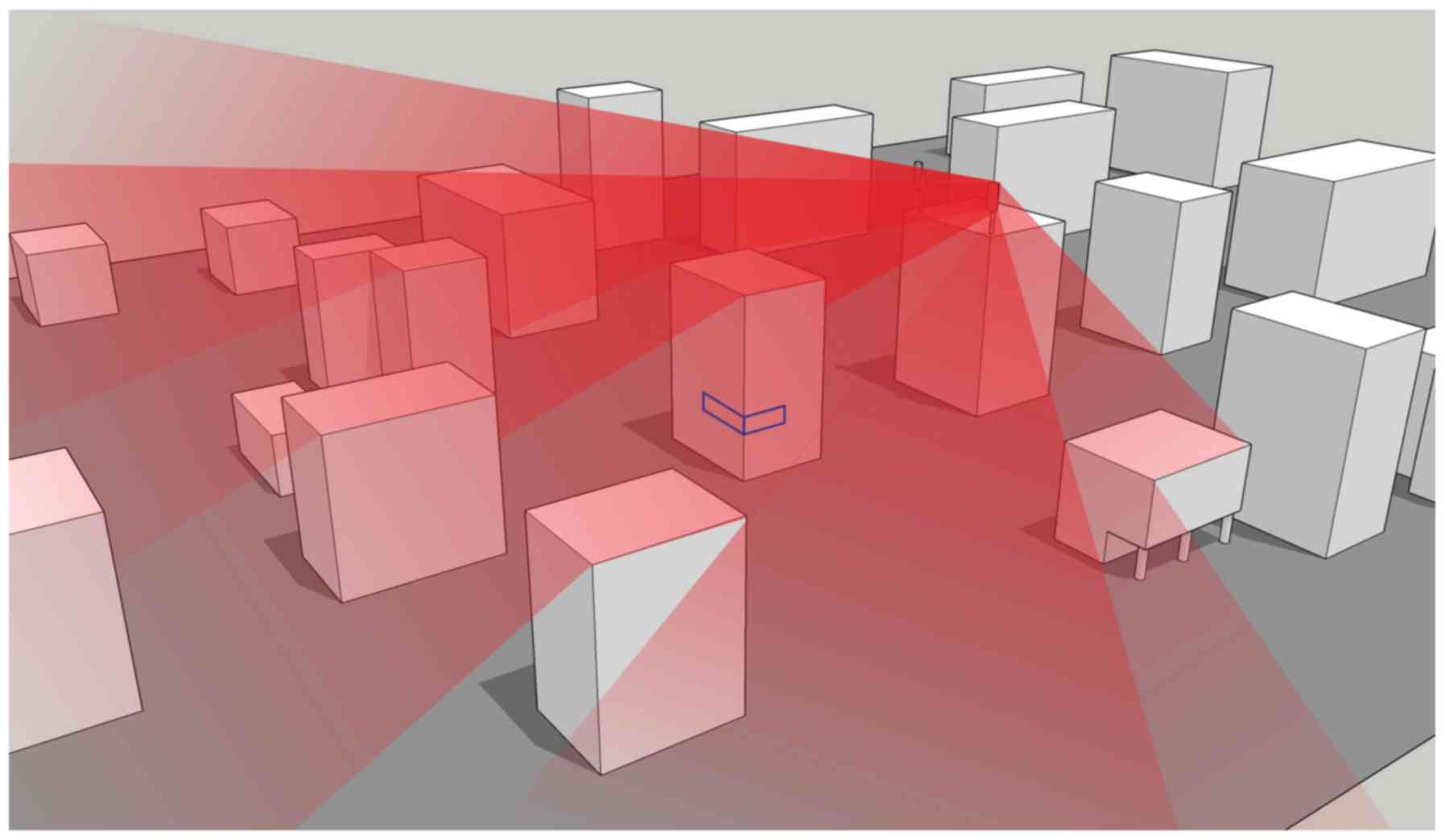 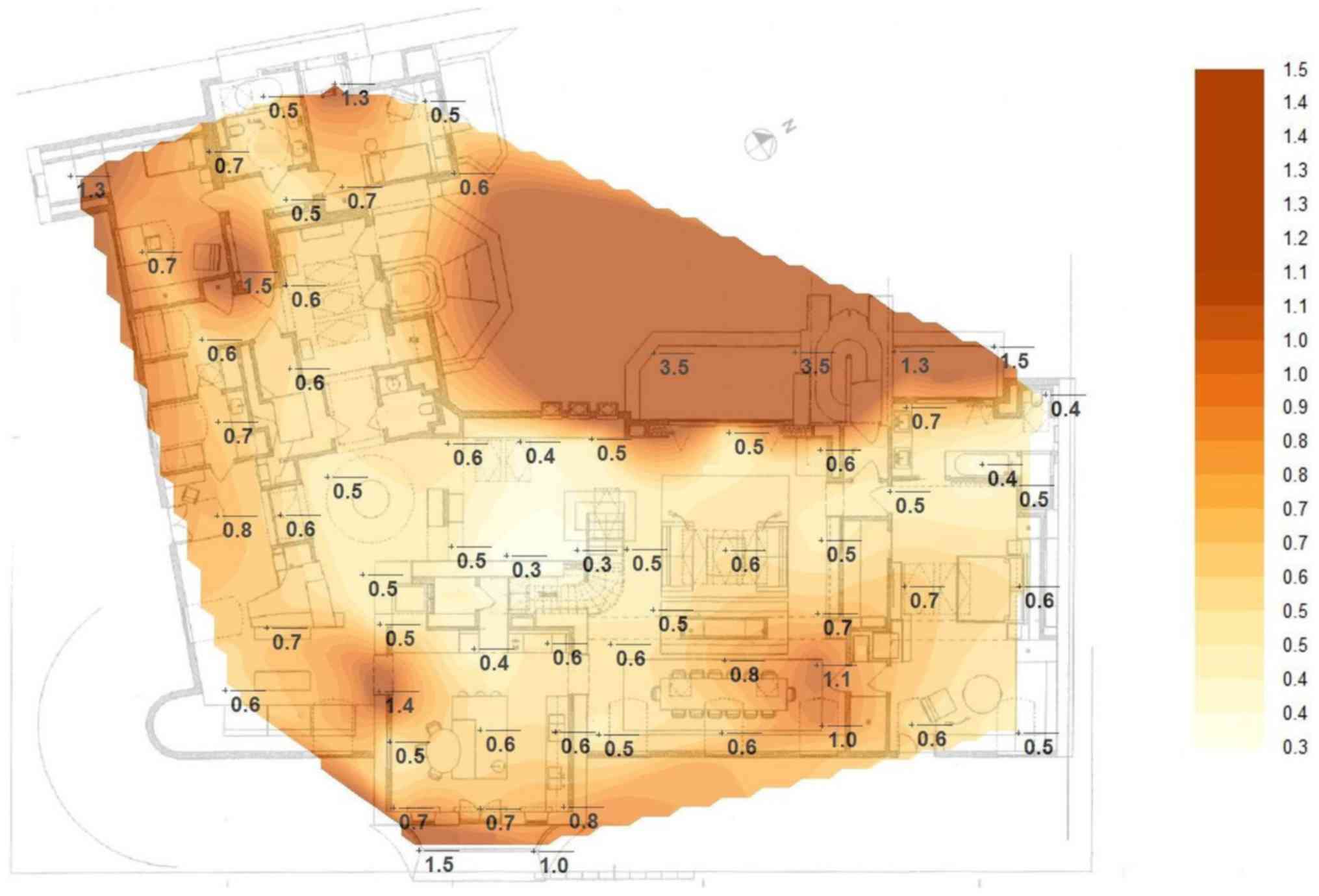 As seen here in the diagrams, depending on where you are indoors (in relation to the cellular towers on a parallel plane, you may experience higher radiation levels even though you are below the towers.
Though, the radiation on the balcony is much higher as you are getting neighboring apartment/condo building's roof top radiation directed your way (like you said, directional on the X axis mostly with angular directly slightly down on the Y and Z axis. Thus, the reason why the higher floor you live in, the higher the potential radiation, from neighboring high-rise buildings that may have cellular antennas/towers on the its respective rooftops .
Which means, the closer your balcony is to a neighboring building the, the higher the radiation will be absorbed by the units in your building, and the power of radiation will increase the higher top you live, and it will increase again when you go into the balcony. This is one of the downsides of high density high-rise living (such as downtown Toronto or downtown Vancouver)
Reply to Thread
Back to top
Top