I lost my Merkur 34c and was shopping for a new safety razor. Was looking at the Merkur Progress or Futur because they are adjustable. While comparing the reviews, I found out the patent expired on the Merkur Future and Chinese-made clones are available for the fraction of the price.

There's a huge thread on the Ming Shi razor on the shave den forum. Also a review here.

Anyway, thought I would share since this is purported to be a good quality safety razor that's only $9 US with shipping included. Note, I ordered mine today so I haven't seen it in person - just relying on the reviews I found online. 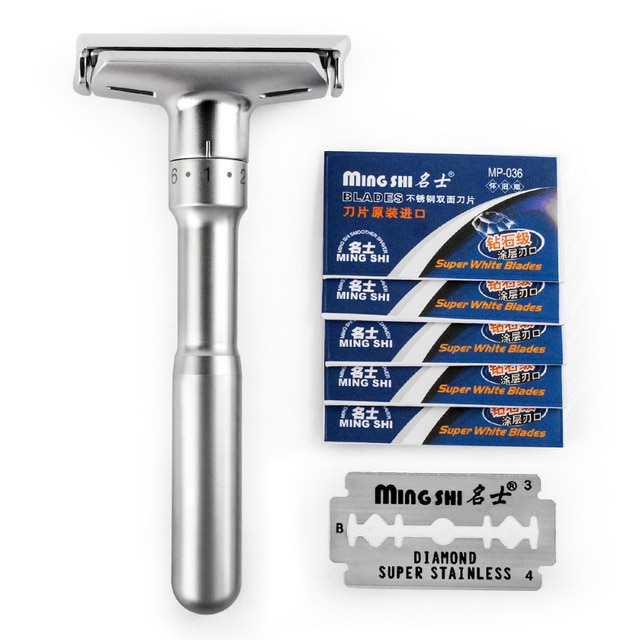 i've bought a number of "clones" off of aliexpress... they were not clones. they were imitations of an inferior quality. not saying that is the case here with this razor since i have no first hand experience of it. but my previous experiences have been a steady trend.

Already got a couple Merkur's (including one at work). I'm tempted but have zero justification for it
Feb 14th, 2018 2:24 pm

evoviii wrote: ↑ Already got a couple Merkur's (including one at work). I'm tempted but have zero justification for it


do you even RFD bro?

when putting sharp objects on your face you may not want to roll with a knock off. just saying.

Can someone (our resident RFD expert on the matter) point me to a great-bang-for-the-buck safety razer?
Client at: Tangerine, VoIP.ms, Virgin Mobile
Feb 14th, 2018 3:49 pm

You trusting an alixexpress seller with something that draws blood? You are much braver than I am.
Feb 14th, 2018 3:54 pm

marc_t wrote: ↑ Can someone (our resident RFD expert on the matter) point me to a great-bang-for-the-buck safety razer?

you will likely get ALOT of differing options on this.

for what it's worth this is what is use:

HoneyMustardMiso wrote: ↑ You trusting an alixexpress seller with something that draws blood? You are much braver than I am.

If you're using these to draw blood, you're doing it wrong.

I suppose the prudent thing to do would be to wait until I get mine and can report whether it actually worked or not.

Seriously though, search for the shave den forum thread if you have questions about it - it's like 400 posts long. This "knockoff" Futur is no secret.

marc_t wrote: ↑ Can someone (our resident RFD expert on the matter) point me to a great-bang-for-the-buck safety razer?

One option is to get a vintage Gilette on eBag. But then you need to either spend some time reading shaving forums to see which ones you'd like, or gamble and buy a few. FWIW, one of the most often recommended low-cost but good vintage Gilettes is the Gillette Tech Razor (usually available on eBad but just ask Google).
If you want new, there's the Lord Razor for about $12 on Amazon, but some reviewers say it's cheap crap and you get what you pay for. I haven't used one, but I have used several in a range of qualities and prices and I can say that once you get into using a safety razor and get your skill/habit down, you'll really notice and appreciate the difference a good quality razor makes to the experience.
There are several in the $30 - $40 range that offer a lot for the buck. Here's some info that should get you started:
http://safetyrazorshaving.com/what-is-t ... ety-razor/
https://www.badgerandblade.com/forum/th ... se.495507/

This razor is legit. The patent for the Merkur Futur is up and so this uses the same design, but lower quality materials. I have one and it makes for a good shaver and is certainly no worse than other <$50 DEs.

Men Essentials just yesterday blew out all of their stock and will be shifting focus, whatever that means.

I'd add to this list two other fantastic Canadian vendors:
www.canadianbladeco.com
www.topofthechain.ca

Both will have a good selection of budget DEs to get started on.

I have this, never used an adjustable before. It's great for the price, but I prefer my Lord. If you like an adjustable, I think this is fine quality. The one thing I don't like is the smooth texture, should be textured.
Mar 9th, 2018 9:22 am

I got my razor yesterday!

Comes in a shiny metallic box. Since the instructions are in Chinese, I wonder why there's any English on the box? Who is this marketed to? Comes with a box of 5 razor blades. I read on some forums that the blades aren't great. I can't comment, I have a big box of 500+ blades already so I just popped in one i was already comfortable with. I'll probably try them out at some point, but I figured I would use some good ones to give the razor a fair shake.
Once I inserted a blade, the blade gap looked a little intimidating compared to my old Merkur - but was actually pretty mild in practice. Since visually it looked pretty aggressive, I tried it out on the lowest setting. No nicks, no burns - just smooth skin. I'm quite pleased with the result. I felt like I had to make more passes than with my old razor, but since I was on setting "1", that seems fair. I'll try turning it up for my next shave.

My only complaint so far is that it is a little slick to grip. I didn't have any issues, but would prefer some knurling. I've already had a couple ideas how I might invent some of my own...

Not sure I want to buy a razor from a country where no one can grow facial hair. I'd buy from Italy.

Giving it a shot OP, I ordered the one with the base for $11 USD with the $2 coupon