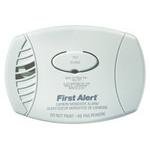 bunch of other detectors on sale at lowe's:

Quite often these things that say 1-2 months end up shipping much sooner. Assuming you don't have a CO leak occurring right now, hopefully it arrives in time... roll the bones, so they say...
Feb 4th, 2017 12:10 pm

Probably gonna pick this up as a backup to the house system which is hardwired.
During the last ice storm, power went out and we had to use the gas stove, however if there was a carbon monoxide leak, there would be no way of knowing cause the other alarm had no power.

And for those getting fire alarms, only get ones with photoelectric sensors. The ionizing ones are not recommended. Most likely the fire will b3 wildly out of control before an ionzing fire alarm goes off.
The RFD Doctrine
Toronto : Anywhere west of Montreal and east of Calgary.
Scarborough: Anywhere becomes Scarborough if it's a thread about crime.
Google: RFD is faster than Google. Make a thread if you need to find out what bus to take.
Feb 4th, 2017 2:38 pm

snagged a couple - for the basement/kids room.

Thanks.
Reply to Thread
Back to top
Top