More offers from Amazon.com
Saw this deal over on Slickdeals. The deal is through Amazon and it’s fulfilled directly through AnkerDirect.

Use promo code BESTCAMA at the amazon checkout.

Assume the user working for them. 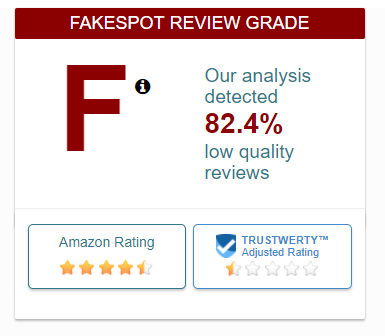 kanechart wrote: ↑ Assume the user working for them.

I think kanechart is just saying that the majority of the Amazon reviews appear to be fake.
Jan 30th, 2018 12:20 pm

kanechart wrote: ↑ Assume the user working for them.

It should be okay. It still has a good rating after the reviews have been adjusted.
https://reviewmeta.com/amazon/B076GYGVY5

fudge_u wrote: ↑ It should be okay. It still has a good rating after the reviews have been adjusted.
https://reviewmeta.com/amazon/B076GYGVY5

I bet the fake reviews skew the perception of the product thus influencing the legitimate ones. Nonetheless it's good to have many tools like that website and fakespot especially when making an expensive purchase.

chipskylark wrote: ↑ I bet the fake reviews skew the perception of the product thus influencing the legitimate ones. Nonetheless it's good to have many tools like that website and fakespot especially when making an expensive purchase.

It's a reasonably good deal at $75, the actual delivered price - let's not pretend that it's $56.

It has most of the checklist features. Good Sony sensor with enough low-light sensitivity for night recording. WiFi interface. Suction cup mount rather than sticky mount behind the mirror - some people prefer one, some people prefer the other. No mention of supercapacitor, so it's probably battery, but rated to operate down to -20C.

All the Chinese dashcams have high fake review scores, at least to start with. For some reason they seem to think that it's a good idea to seed the reviews to jump-start sales. It's not.

I’m in market for a new dash cam, current one doesn’t cover the whole windshield angle. Is this legit I didn’t pull the trigger on the DR2 since it was like 85.99 CAD and USD wasn’t much of difference. Same thing was said with that Aukey that they are known to produce fake reviews or so. Can anyone here vouch for this camera, thanks.
Feb 1st, 2018 11:19 am

I just got the Aukey last week, and it seems fine, exactly as advertised. The main criticism I had was that the manual is a joke and Aukey has zero supplemental information online. I think Fakespot was correct that some of the few amazon.ca reviews were fake, but there were already 100+ real reviews on Amazon.com, so it didn't really matter. I think most people consider Anker and Aukey in the same category as mid-tier suppliers.

Keep in mind that all the camera suppliers are quoting incorrect coverage angles for their cameras. Some of them are outright lying (yes, I mean you Tomtop), but I think in most cases they are quoting a lens spec without taking into account that the sensor only covers a part of the lens image, and probably discards 10-15 deg of view at each edge. That's partly because there's increased distortion and chromatic abberation right at the edge of the lens image, and partly because of how the rectangular sensor fits within the circular lens image. The ones that quote 170 deg lens FOV are right around 140 degrees of horizontal coverage in the recording in actuality, and that provides a pretty good balance between horizontal coverage and not including too much sky or having to squish the image.