Tenants advised my there are ants inside. They are pretty clean. They bought traps and poison and have asked me to re reimburse them . Although I feel I shouldn't since it's most likely their fault I guess I should to keep good faith ?! Also municipality law states that its owners issue no matter the cause .

I don't believe landlords are required to take action over ants...maybe rodents/pest control...but ants definitely not.

I don't believe landlords are required to take action over ants...maybe rodents/pest control...but ants definitely not.

You would believe incorrectly...

Landlord is responsible for pest control (including ants) unless they can demonstrate negligence by tenant. For example, if the tenant doesn't do their part of a bedbug treatment and a re-infestation occurs, the tenant could be liable for having to re-treat.

. I already contacted the municipality licensing and standards, its owners responsibility to matter who the cause is.

I guess I should reimburse them to keep good faith. Just dont know what to say to not sound like a prick
May 8th, 2019 1:00 pm

Go take a look and see what is the cause first. If it's food on the floor, then ask the tenants to be cleaner, they won't be offended.
Keep ur receipt to expense it against ur rental income.

Keep the receipt. Another expense that you can claim.
No political content in signatures (Who did I offend?)
May 9th, 2019 6:56 am

Is this for real? As far as I'm concerned you're both in the wrong. Him for bringing up such a minor petty issue, and you being concerned about it enough to bother posting something online that amounts to the price of a coffee. If ant traps are having that material of an effect on your cash flow, you're doing something wrong.

There are times when as a tenant you need to put your foot down and insist on your rights, which unfortunately can have repercussions in souring the business relationship and make favous down the road harder to come by. $3 worth of ant traps is certainly not the hill I would choose to die on. If I were you, I would probably pay it with rolled eyes, and make a joke about them being poor, throw in an extra $5er and tell them this is a waste of both our time. Is such a trivial amount of money even worth the time it makes to take the phone call for these people? In the future, maybe make rent $50 a month cheaper, and try and find people who won't be whiners.

In a related question, I have a bit of a veggie garden on my patio. Last summer i noticed a fair number of Aphids chowing down on my zucchini leaves. I bought some insecticidal soap at a cost of $4. Do you think it's worth me bothering my landlord to see if I can get reimbursement? Or is the balcony not covered? Coincidentally I also had ants, but just killed them, and left some home made poison from sugar/borax, both of which were borrowed from my mom. Any chance I could get compensated for that do you think even though it wasn't a formally purchased any poison?
May 9th, 2019 7:09 am

santafe wrote: ↑ How much are they asking for?

Traps and other insecticide was about 20. If I don't reimburse them creates hostility???

Having ants isn't always a sign of uncleanliness. My house is clean and I have someone come every two weeks to clean and I had ants 3 weeks ago in the basement because of cat food and I still kill 1-2 ants a day upstairs because those I don't know where they are coming from.

Don't be a cheap landlord, look at the big picture. If my tenants come to me with issues like this I take care of the cost no questions asked. The tenants are already helping you pay down the mortgage, it's a beneficial symbiotic relationship so I like to keep on good terms with all my tenants rather than antagonizing it over some measly costs. You even said they are pretty clean and overall they don't seem to be causing you any major issues (otherwise I'm sure you'd have more to complain about rather than just the $20 ant traps).

Btw, I had ants in my own house recently. It's not like we had food crumbs lying around everywhere--I laid some traps and watched the ants go back--there was a crack under the trim of an outside wall where they were getting in from. After letting the traps run for a few days we caulked up the crack. It's been very rainy lately and I read that if their antholes get flooded, the ants will try to move into nice dry habitats (i.e. human homes). So not necessarily a cleanliness issue.

Maybe you should ask the tenants for help identifying these cracks in the house. If I were the tenant and you blamed the ant infestation on me being unclean, I could flip it back it back on you and say you've been neglecting the property, not taking care of cracks in the house where outside critters can get in. (Although that's also not fair to the landlord since it is impossible to seal up all cracks in a house, but just an example of how your argument could be refuted if you unfairly blame the tenants for being unclean.)
May 9th, 2019 11:22 am

I treat my tenants the way I would like to be treated.

Personally I can't stand ants in the house (some people might not care as much?? I don't know). I don't know what kind of relationship you have with them, so there's not a one solution for handling tenants. If you get along well, then you shouldn't give them trouble for such a minor thing. In the future they may overlook other minor things because you helped them out.
May 9th, 2019 12:35 pm

What kind of people are they? Are they good tenants or do you have a feeling they're the more problematic/argumentative type of tenants?

If they're good, reimburse them, no questions asked. Chances are they'll appreciate it and won't see you as a push over.

If they're the latter kind of tenants, I would start the conversation with, "Yes, I will reimburse the cost", and then follow up with some neutral questions such as, "Do you know why there are ants? / Do you know where they are coming from?" and probably end with, "Next time, just give me a quick call first before spending money and we can go over it together / Thank you".

That way, next time there's an issue, they're bringing it to you first and you'll get to decide how to proceed instead of "Hey, we bought this and spent x dollars. Now reimburse us."
May 9th, 2019 2:57 pm

On an unrelated note, I have began to see ants in my house that never really appeared in previous years. Do you guys use those gels to kill them?
May 9th, 2019 5:10 pm

I bought the "Ant Out" traps with borax (round pucks with the four holes, I placed them upside down so the holes are easier for ants to access). Very cheap but effective. The bait is a peanut butter mixture, our ants (the really tiny ones) seemed to love them but I've heard other types prefer sweet over savoury baits so if it's not working, switch to something else. Put the baits near where most ants are clustered. It may take a bit of time for the ants to discover them, but once one ant finds it the others follow immediately. Borax seems to be the "poison of choice" from what I've read. (But use caution if you have pets in the house.)

Like I mentioned above, I'd recommend trying to follow the ants back to see where they came from. Usually they'll guide you to cracks in your house that you probably will want to caulk up. (But wait a few days to give the ants time to bring all the bait back to the colony to kill them.)
May 9th, 2019 6:26 pm

wantboost1 wrote: ↑I guess I should reimburse them to keep good faith.

wantboost1 wrote: ↑I'm trying to keep good faith but at the same time not trying to be a push over.

The # of times OP has mentioned "good faith" in this thread...

Just give them the money and be done with it. Just say - be careful so that the problem does not re-occur, they'll understand.
In the beginning the Universe was created. This has made a lot of people very angry and been widely regarded as a bad move. -- Douglas Adams
May 11th, 2019 11:34 pm

OP, get those Terro Baits and find the opening where they're coming from.

Cut it open and put the opening right where they're coming from. It's usually in between caulking or under base board. They'll generally start going in and take the bait to the queen. 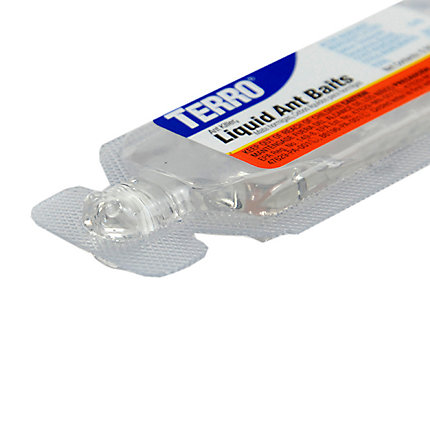