Atari getting into the hardware and software business - YAHOO!

The console will be powered by an AMD-customized processor and run on operating system Linux.

In an announcement Tuesday, the Ataribox team said it would seek to raise funds for the console on crowd-funding platform Indiegogo "this fall (read: pretty soon)."

"We want you to have early access, grab special editions (and pricing) and to have you as active partners in the rollout of Ataribox," the team said.

Atari's newest console is a modern take on the popular late 1970s console, the Atari 2600. Ataribox claims it will bring a "full PC experience for the TV," and deliver home-focused features such as video streaming, social media, web browsing and music.

The brand has developed some of the most well-known household names in arcade gaming, from Pac-Man to Pong.

Ataribox gave an initial first look at the console back in July. It will include an HDMI output, four USB inputs and a SD card slot.

The console is estimated to cost between $249 and $299 but this may change "depending on specific editions and memory configurations," Ataribox said.

It is set to enter a fierce competition of console makers. Microsoft unveiled its Xbox One X at the Electronic Entertainment Expo (E3) in June, while Nintendo's latest console, the Switch, has seen shares climb 70 percent since its launch.

The latest announcement seemed to do little to help Atari's stock price though. Shares of the firm were trading at 0.36 euros ($0.43) at 11:02 a.m. London time, down 2.7 percent, amid a wider sell-off of technology stocks. 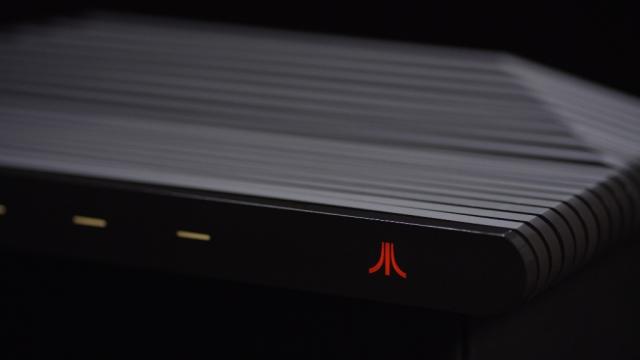 But I fear this Atari entry will be short lived.

Anyone up for some 1080p Asteroids or Space Invaders?

It had better ship with a slew of the retro games Atari was famous for or this will be passed over quickly.

Yes I was small when I had mine, maybe if the specs are up to par they can real in some third-party developers and do remakes of the games we enjoyed back then.
Sep 28th, 2017 12:13 pm

"Ataribox claims it will bring a "full PC experience for the TV," and deliver home-focused features such as video streaming, social media, web browsing and music."

I'm curious as to the value and the way it will differentiate itself in a marketplace that is already pretty competitive and saturated with a lot of tech boxes that do the same things, some which do it very very well.
At $299, what can it possibly have that would make somebody buy this over all the other gaming platforms and/or media boxes.

Anyone have any links about these units?

Thinking Atari makes me think of the Amiga...at that time mid/late 80s, the Amiga had the best "music studio" software hands down, of all the other possibilities - that is perhaps the one and only thing I recall...
Sep 28th, 2017 4:51 pm

Crowd funding? Yeah this is gonna be a flop.

vodka wrote: ↑ Thinking Atari makes me think of the Amiga...at that time mid/late 80s, the Amiga had the best "music studio" software hands down, of all the other possibilities - that is perhaps the one and only thing I recall...

I remember using Macs and oddly enough, Atari ST for music. The Ataris had native midi ports, when helped immensely. The Amigas had the video toaster, when was light-years ahead of everyone else.

But in this case, the only thing Atari has going for it is the name Atari, which will maybe earn this product a second look, but hardly guarantees a sale.
Sep 29th, 2017 10:06 pm

this will sell only to those hardcore atari collectors... its priced at the same range as the entry level PS4 and xbox one's $299, so if given the choice most will opt to buy one of those compared to an unproven mini pc that will only run medium setting linux based games (going off my steam machine, there is a really low amount of AAA titles that run on linux so i formatted it and installed windows 10 to run everything and more). this will fall into the same pile of ouya, nvidia shield and all those other android/linux based boxes, over priced and very limited in what they can actually do... sure the nvidia shield is pretty much on par with the nintendo switch, but there is NOTHING worth while on it to justify the purchase, i own one and it was setup and boxed back up in less than 3 hrs... it sucked that bad for content and usability as i can run netflix, plex, youtube and a couple other apps on my PS and xbox systems. anywho, this atari box will be more of the same and at a premium money wasting amount.
no matter where you go, there you are.
Dec 14th, 2017 10:34 pm

Ataribox delays pre-orders due to development problems
An updated launch plan will be available soon.

There is already a thread about this at PC & Video Games.
A life spent making mistakes is not only more memorable, but more useful than a life spent doing nothing.
Dec 16th, 2017 10:43 pm

sandikosh wrote: ↑ There is already a thread about this at PC & Video Games.

I saw the thread here first. I'm glad to see it here, even though I saw it on youtube first.
If it ain't broke, don't fix it!
Reply to Thread
Back to top
Top