hansdoreen wrote: ↑ I can confirm as well.

BRKAMZN wrote: ↑ Call in to cancel and have the cancellation date well into the future like a month or so.
Give them some time to get back to you either via email or call back. Then you will get those good deals.

I left bell a few months ago now. I did cancel well ahead of time and got 0 love from them. Cancelled about a month before (tv/internet/phone). Initial person said they couldn't offer anything at all until my current contract ran out (via internet chat). On the cancellation call as well as second and Third person i talked to on the phone by calling in myself, all of them tried to actually increase my monthly cost. Never got a call back to offer anything better.
I then called in to confirm cancellation and they seemed like they lost the date or something. Finally cancellation came and went. I'd signed up with Ebox and the bell guy came by and hooked up ebox.
Anyway, cancellation comes and goes, i call in a couple weeks after to see what's up with final bill, they say wait a couple weeks and I'll get final bill and instructions on sending stuff back. Get final bill, they charged me for an extra month. I call back in they explain my internet billing is correct because i was post pay but other stuff was pre-pay and i shouldn't owe for that. They apologize and say it should be fixed in a month. As well they had the wrong service end date, they had it 4 days after our agreed termination date. I pay the balance i'm told is owing.
Next month rolls around, I get another bill that says i'm still owing for phone/tv. As well they've moved the cancellation date back but not to the correct date, it was still off by 2 days. Call back in again, long discussion, they say i'm all good, apologize etc.
Next month rolls around, I get another bill saying I still owe like $15, this is of the 2 extra days they are trying to charge me for...and late fees on those 2 days. I call in again talk to someone, they say it's all fixed...but they say it should be reflected in their online UI in a matter of minutes, hours at most. Yay it's fixed. She tries to sell me bell services.

Sorry that's a long winded story to get to the fact that I did cancel a month before, got no call back like other folks, but months later did have someone that wanted to win my back...good times.
May 24th, 2019 12:42 pm

Save some time on getting ongoing deals. Voice your concern with pricing directly to head office and they will give you the discount:

3+ years ago I got Fibe 300 for $40/month and never bothered with negotiating. I just complained to head office as soon as the price went up and they applied an ongoing promo (if the price goes up, promo credit goes up accordingly). 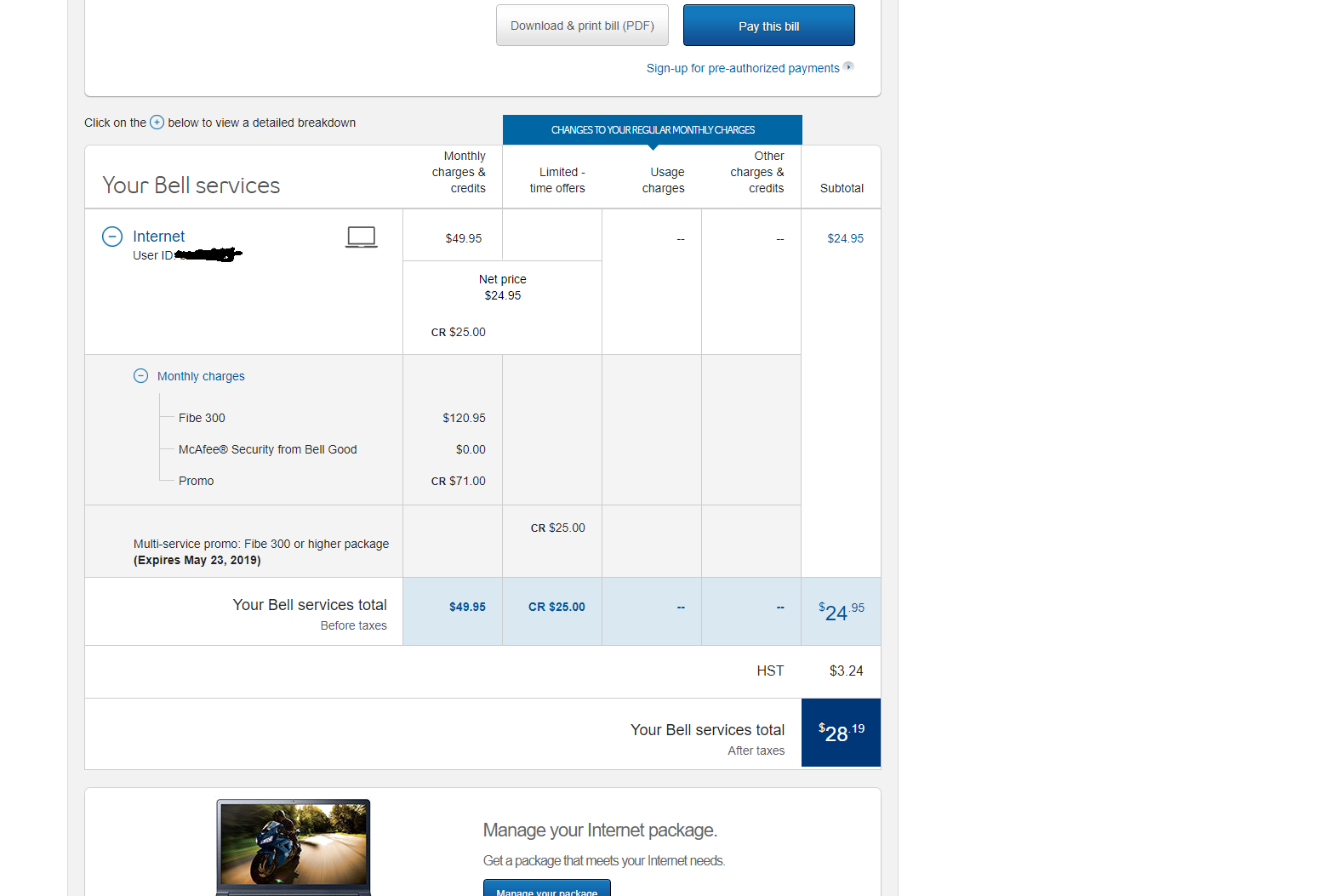 Funny, when they (BELL) lock you into a contract, you can't do anything to get around it or change things in your favor, but when they feel like jacking up the price (which they will for sure) there's nothing you can do about it. That's why I refuse to do business with Bell. Bait and switch company. Weasels. That should be illegal. It defeats the purpose of locking into a contract. When you buy a car, the car company doesn't jack up the price of the car as you're paying for it.
May 24th, 2019 2:29 pm

najibs wrote: ↑ Funny, when they (BELL) lock you into a contract, you can't do anything to get around it or change things in your favor, but when they feel like jacking up the price (which they will for sure) there's nothing you can do about it. That's why I refuse to do business with Bell. Bait and switch company. Weasels. That should be illegal. It defeats the purpose of locking into a contract. When you buy a car, the car company doesn't jack up the price of the car as you're paying for it.

Don't accept a contract then, I never did and been with them for years, been taking 1 year promos and easily renewing or getting a better deal when it expires but never locked into anything and can cancel when I want with nothing to pay
May 24th, 2019 2:41 pm

zaibii786 wrote: ↑ Same here, I negotiated with Rogers and got offered $37 for 1gbps or $32 for 500mbps
Weird thing is I am getting same speed as 1gbps after downgrading from 1gbps, between 550mbps to 700mbps

darXider wrote: ↑ when did you get those deals? very recently?

[quote=
overtask wrote: ↑ Can confirm this tactic, making yourself difficult to reach + rejecting initial offers after you scheduled a cancellation. Once even got to the stage where the technician was over to stop the service and also had a said they wanted to speak to me before I cancel. Depends on how much time you're willing to waste to get the savings, I know, moot point - this is RFD.

Now that this technique is public, I am sure Rogers and Bell will have other ways to combat the abuse lol.
[/quote]

Just remember to run various speed check from your computer and don’t use the bell speed check. I was getting full 1gbps to the modem but from the modem out I was only getting less than 200mbps . After months of talking to tech support and higher up the food chain I now get the full speed that I signed up for. From reading online there are lots of people with similar issues and those are just the ones that check and make sure they are getting what they are paying for. Now that the issue has been fixed bell has been great and I never thought I would say that in my life.
Locked
Back to top
Top