bigredlemon wrote: ↑ Still the old price even though they have the $6/2 signs everywhere. Manager says it doesn't apply on Wednesdays... 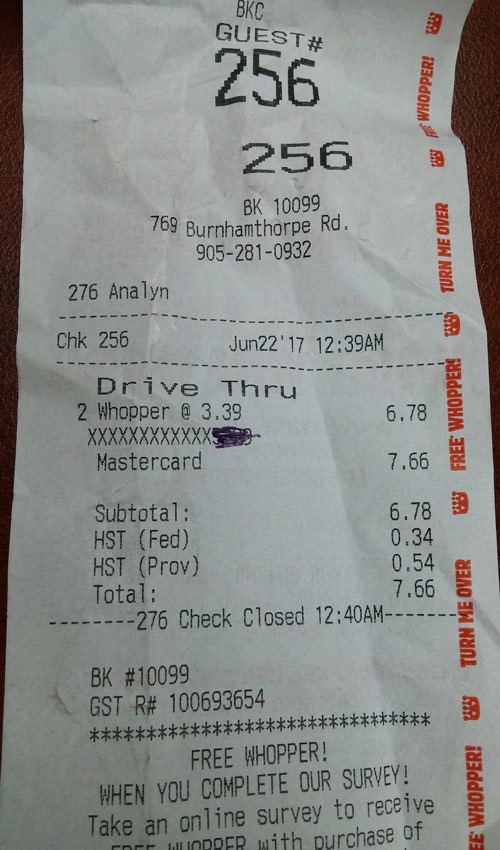 Still the old price even though they have the $6/2 signs everywhere. Manager says it doesn't apply on Wednesdays...

Yea june 22nd was a thursday... why are they still charging you that price?

This past Wednesday, I ordered the 2 for $6 whopper deal and the Manager honored it. Cheaper than Whopper Wednesday price $3.39/Whopper in GTA.

This was noon time today.

Need those cheap 10 piece nuggets back!

Had the same issue on Wednesday, was told it was $3.39 a Whopper because the 2/$6 button didn't work on Wednesday as the Whopper was cheaper. I told her it wasn't $3 a piece cheaper so try the button. She argued with me that $3.39 each WAS cheaper than 2/$6... I was just dumbfounded. I told her to just try the button anyway.

You know what? It worked! Got my Whoppers for $3 a piece.

When do the robots replace people who can't do math?

Coppertone2005 wrote: ↑ Had the chicken sandwich last Wednesday and it was very salty. I think the 'Mix and match' is new. You don't have to get two of the same sandwich.

One sandwich has more than half your daily intake of salt.

Going by that simple formula the Big Kings are better deal. I still prefer Whopper though. To each their own.

Worst (lack of) logic ever

Sheex wrote: ↑ One sandwich has more than half your daily intake of salt.

luckily you don't have to fear salt, unless you have hypertension or kidney conditions

I just got there coupons in the mail, the front of it is the 2 for $6 deal... Wonder if it's dead everywhere...
Reply to Thread
Back to top
Top