I just wanted to share my latest project on how I hacked an AUX input on my Honda Accord.

Here's a couple of pics of the procedure.

The first step is to remove the radio from the vehicle. 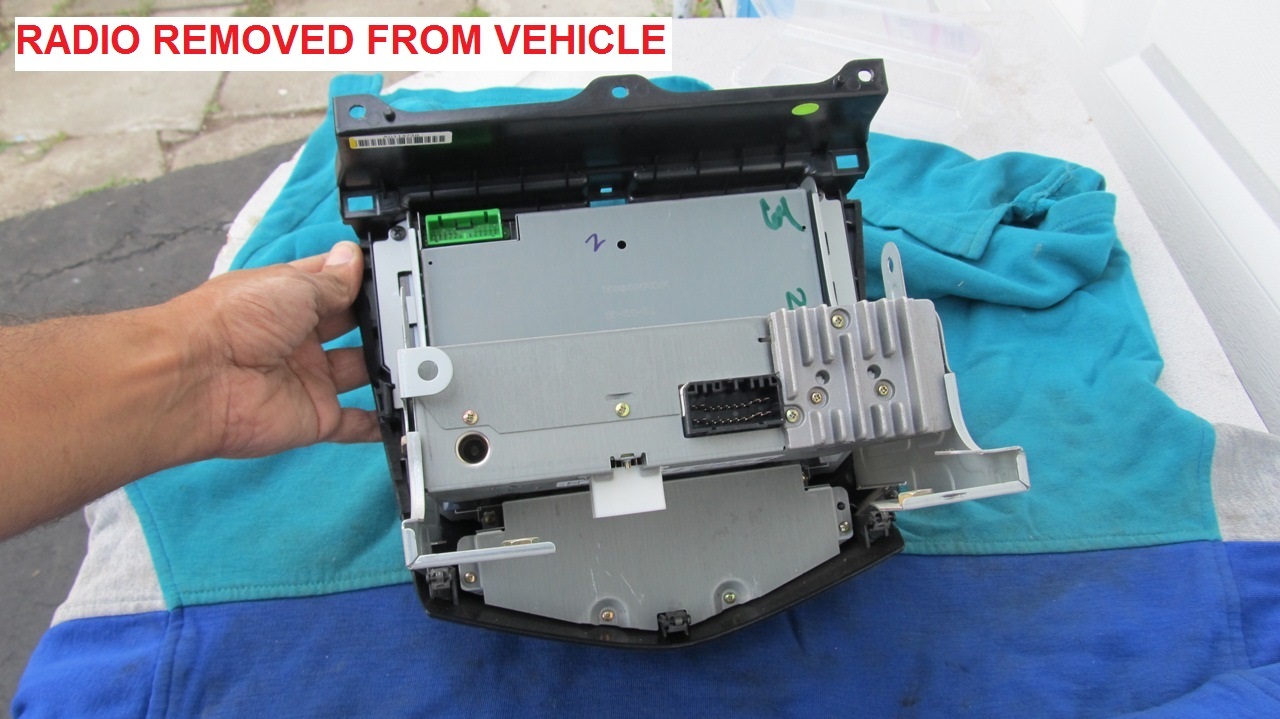 Radio needs to be opened to the motherboard to solder in an AUX line.
Once the motherboard is removed from the case, we can analyze its circuitry. Everything is organized into sections of the radio, depending on its function. Towards the top and right are the inputs, including aux, radio and CD input. They all head over to the sound processing unit, situated centrally on the board.

The inputs from the buttons and LCD on the radio face also interface directly to the SPU. The SPU is responsible for selecting the input, applying the corrective filter, driving the LCD display, equalizing the sound, and outputting it at line level to the transistor amplifiers to the right of the board. After the sound has been amplified, it heads out to the speaker output plug on the back of the radio to the speakers. 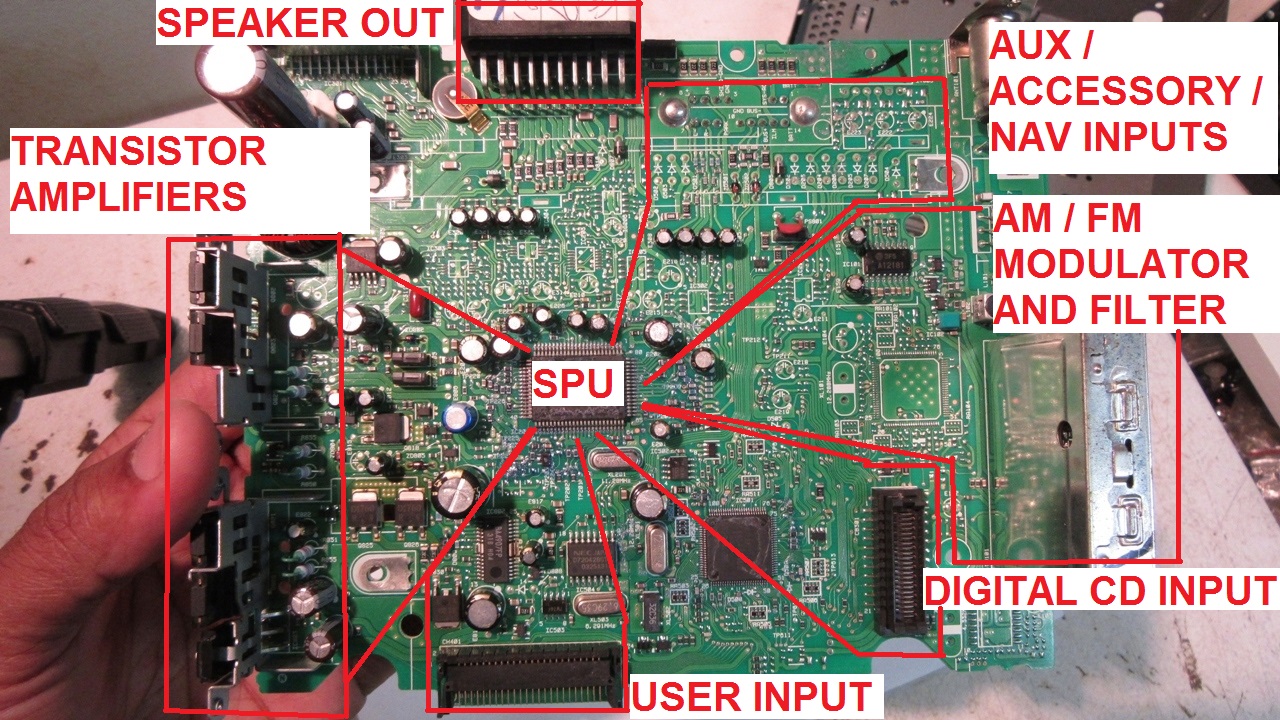 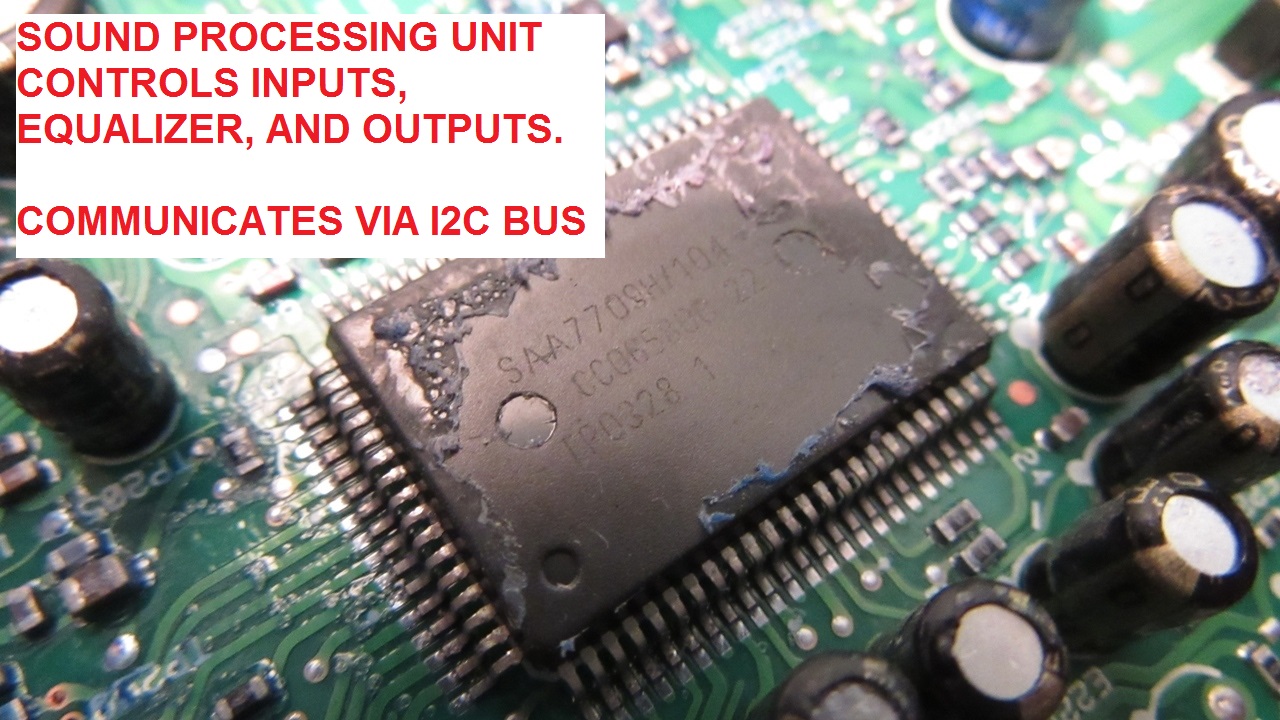 Here’s what the back of the 14 pin accessory plug looks like, with its pinouts. It uses the I2C protocol to communicate with the SPU (Honda calls it M-Bus), and allow it to select this as an input. That’s why in order to use the second method in hacking in an aux line, you actually need a device that can speak I2C language

Now the next logical thing I tried tapping into was the CD player. The connections for an analog output from the CD player to the SPU do exist on the board. However, I traced the circuits and they end up nowhere on the board. Upon further reading, it seems like Honda uses a digital output for the CD changer, which is not compatible with the analog signal coming out of your MP3 player or phone. 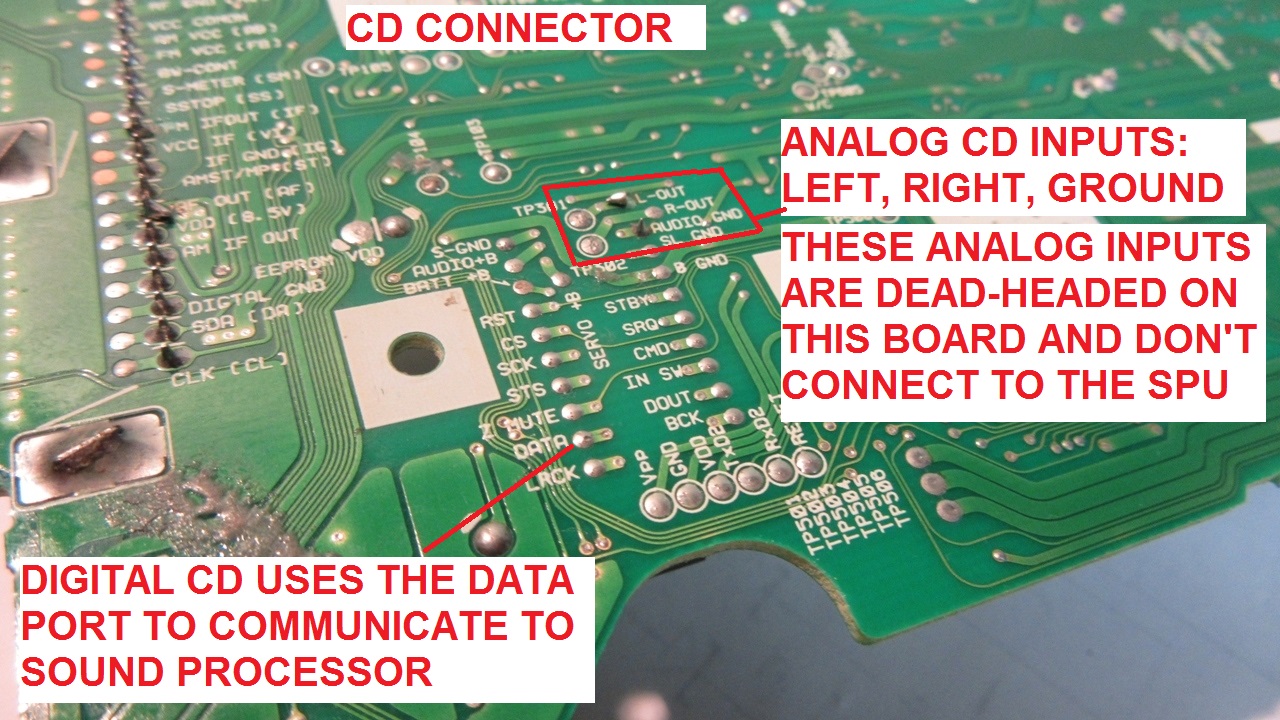 The board also has pinouts for a built in separate aux input. It works similar to the Honda Civic radios – two wires get shorted together for jack detection, putting it into aux mode. Then the left, right and ground are your analog inputs. However, I traced the inputs and they too lead to nowhere on the board. It seems that the spot for its filters (capacitors and resistors) before it goes to the SPU were mapped on the board, but never soldered in, making this an unviable option. 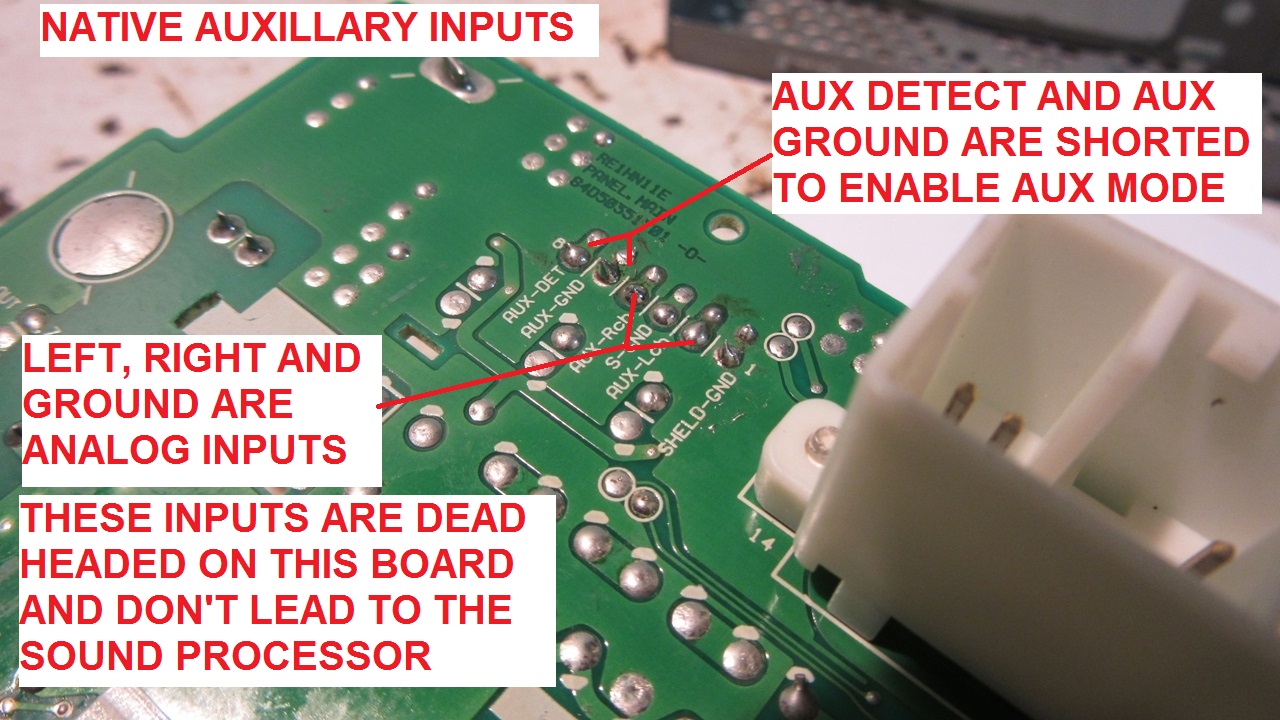 Next we move onto the radio modulator. This is underneath the big shiny rectangular box on the board. Through some experimentation, I found that I can inject an analog mono signal and get it to override the FM signal. To do this, you need to solder wires from your Aux cable to the AF OUT and ground of the board. 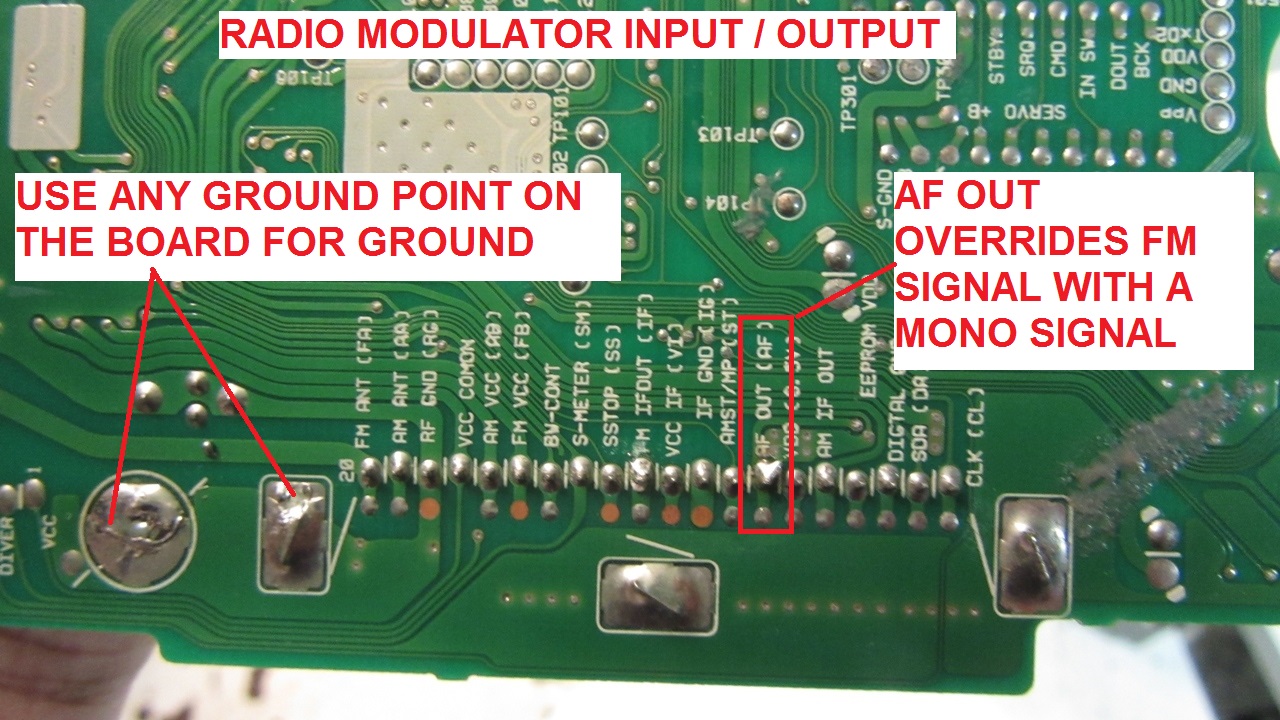 Here’s the heart of the project, a $1 microphone extension cable from the dollar store. Use a 3.5mm pinout to determine which wires are left, right and ground. 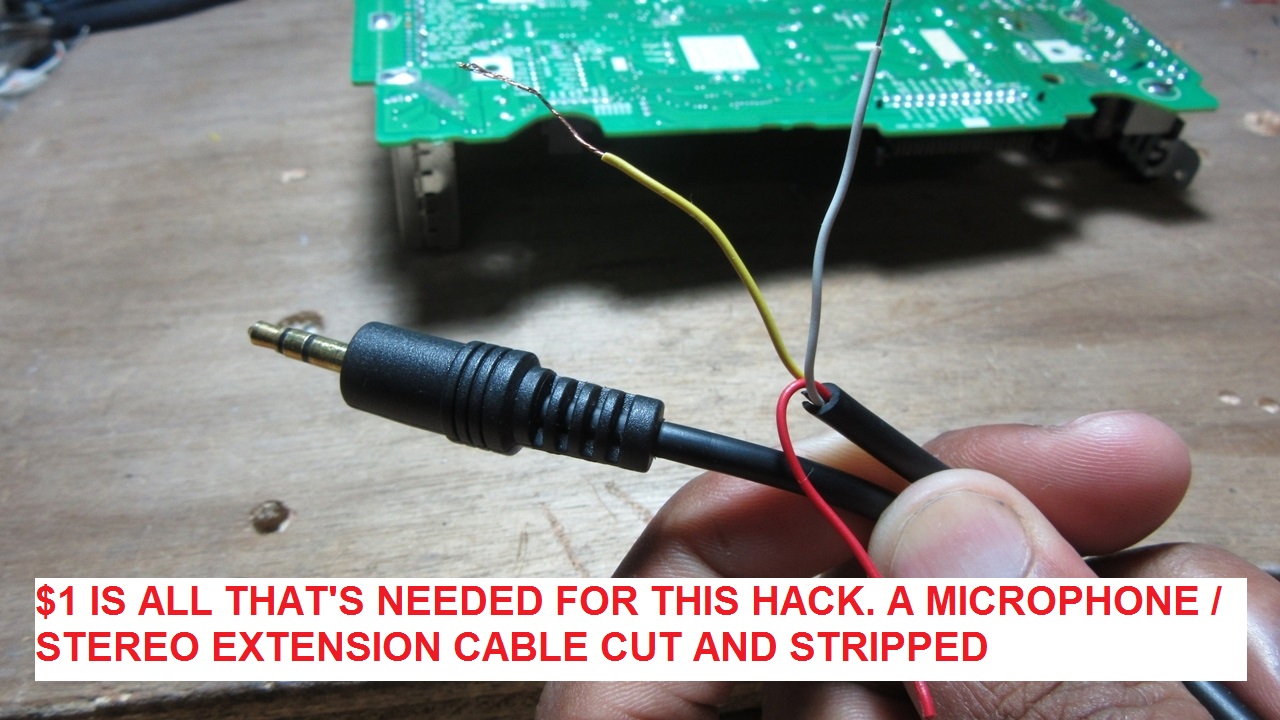 I cut and stripped the wires and soldered them to the radio modulator. This method isn’t the most legit way to do this, since you are overriding an FM signal which consists of different frequencies in different phases with a mono signal. 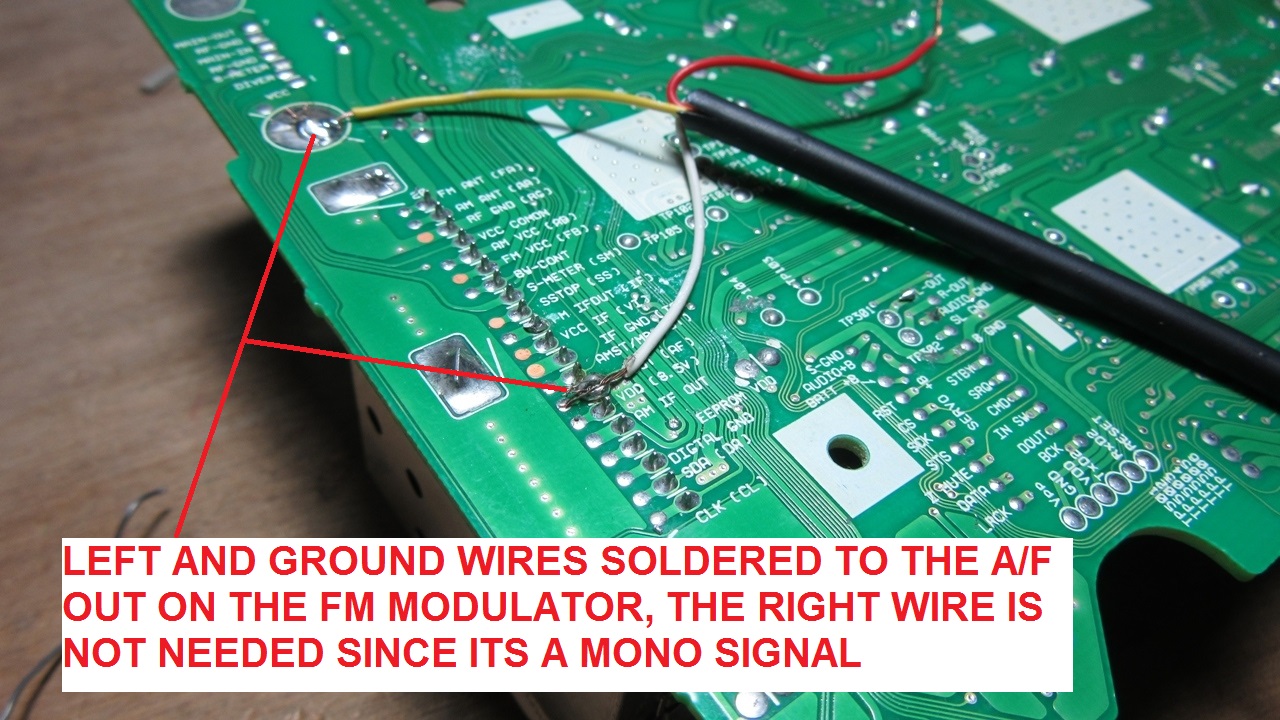 Next, I made a hole in the bottom of the case to route the aux wire out. 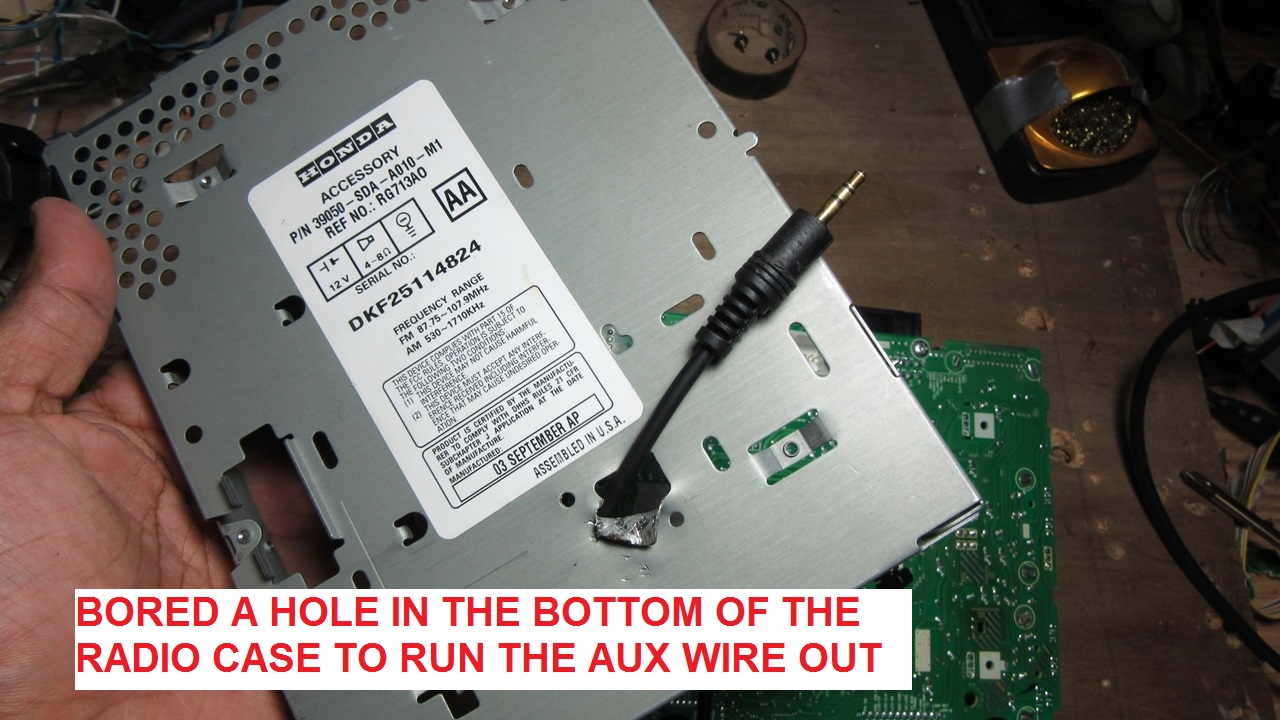 Once everything is closed up, this is what you should be left with, a stock radio with an aux wire coming out, and no extra screws.

The next method is much simplier and doesn’t require you to open the radio. However it does require you to have a Honda accessory which plugs into that 14 pin connector. In my case, I have a 6 CD changer (it’s broken, but that doesn’t matter). 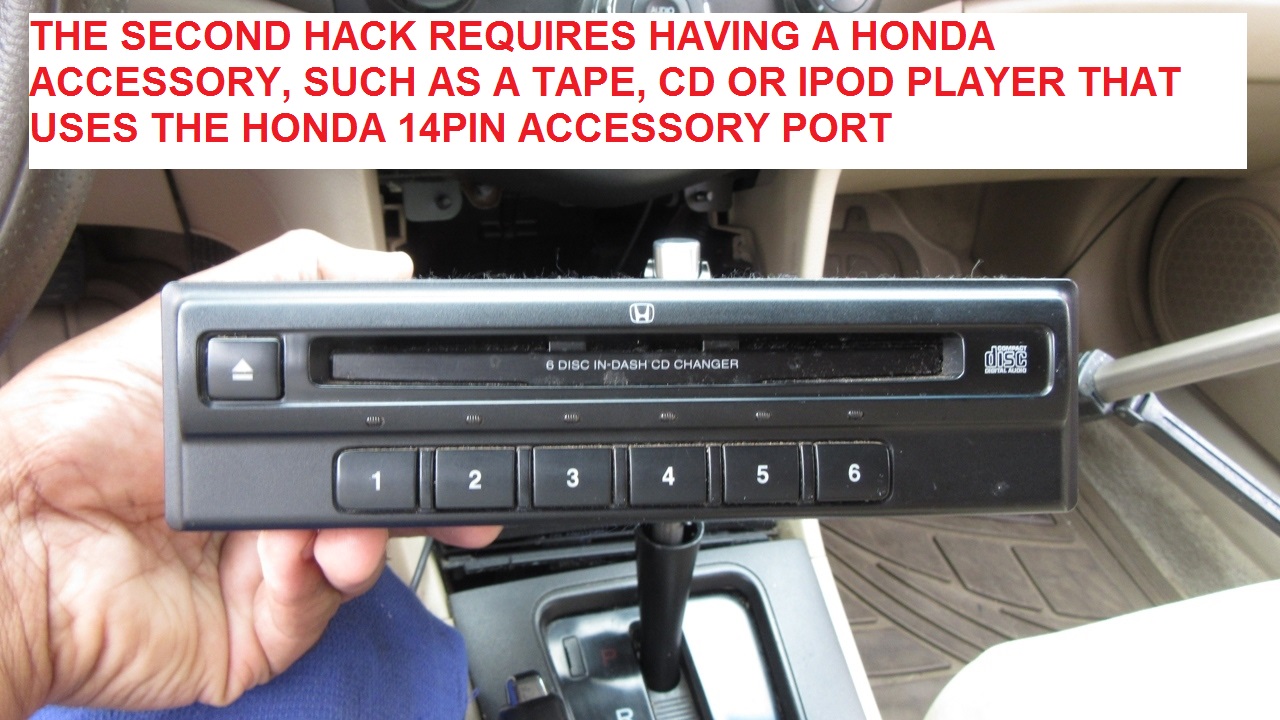 The CD player will be just enough to fool the radio into thinking there’s something at the port to read from. Then we’ll inject our own analog signal into the line. 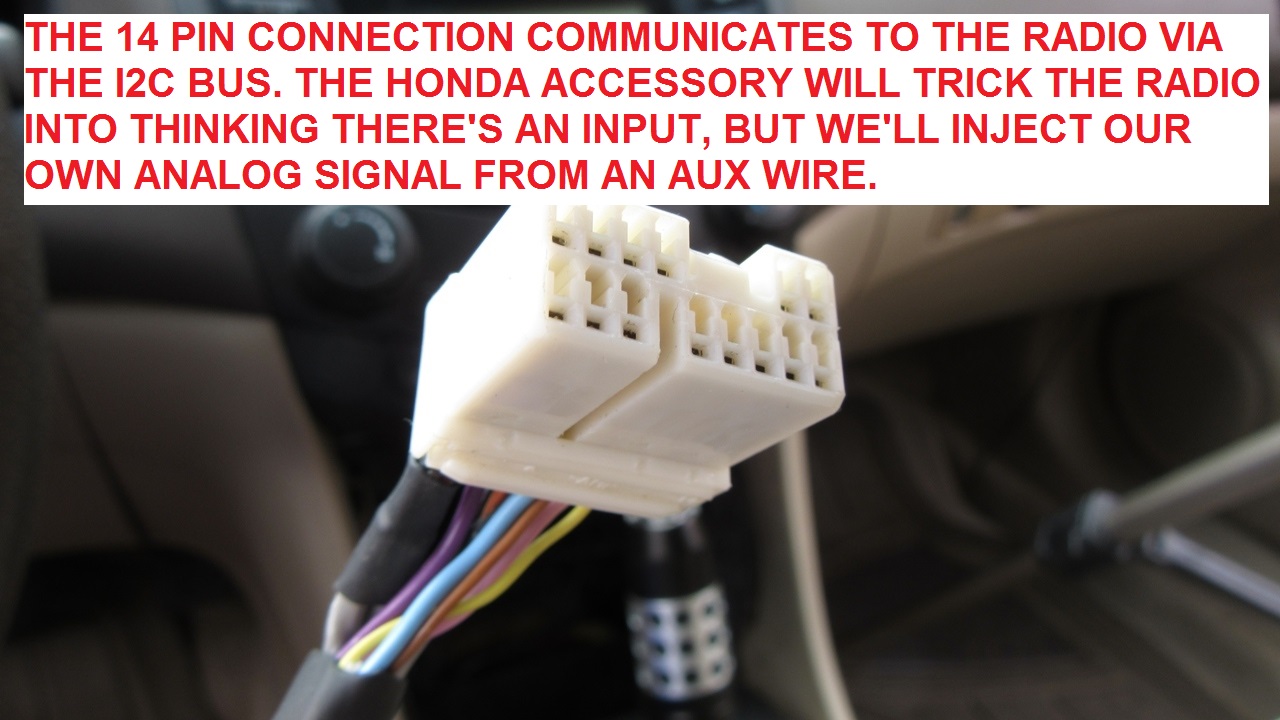 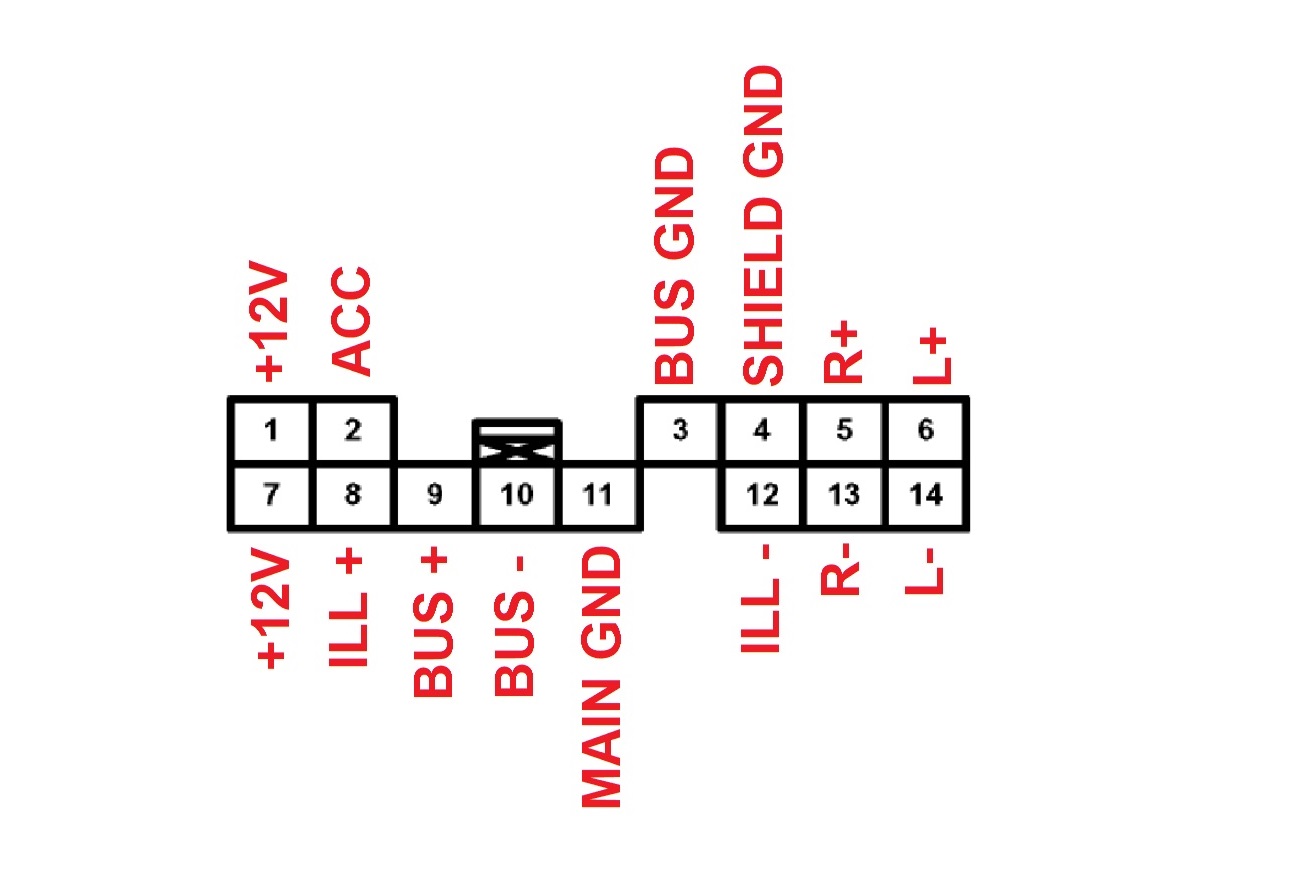 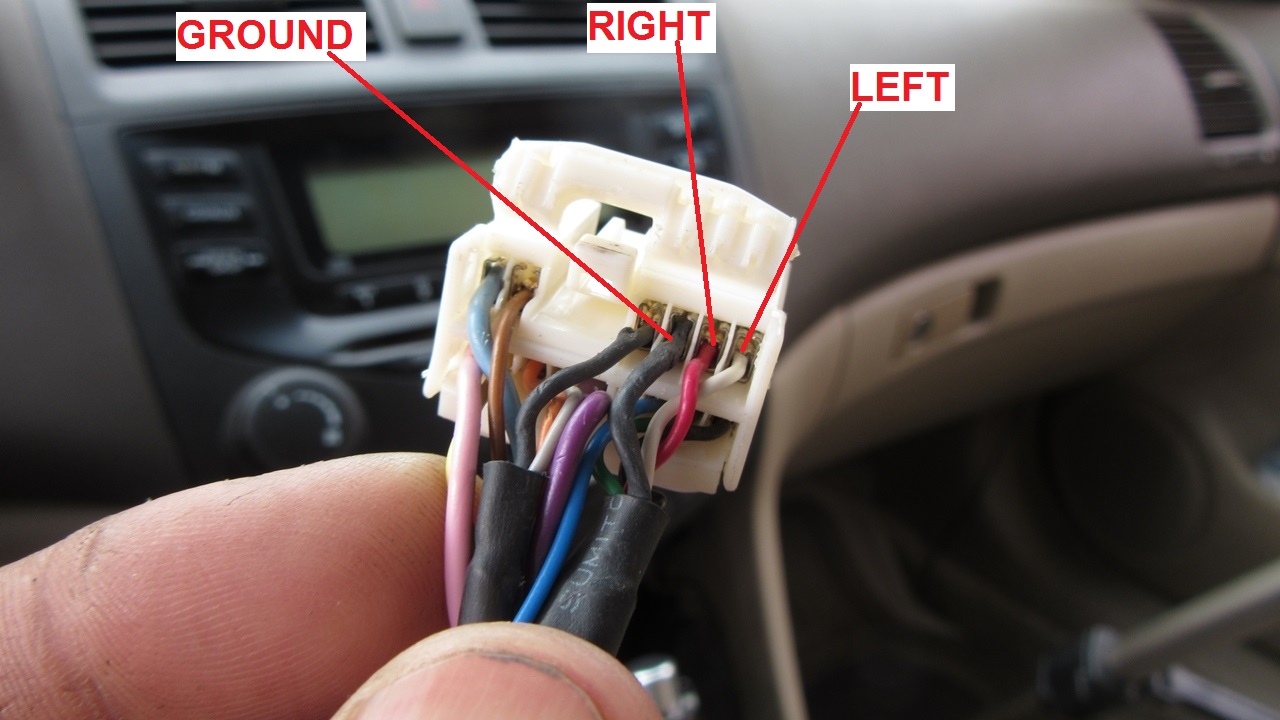 The connections were made by depinning the connector, and twisting the aux wires around, and reinstalling them. No need for soldering! 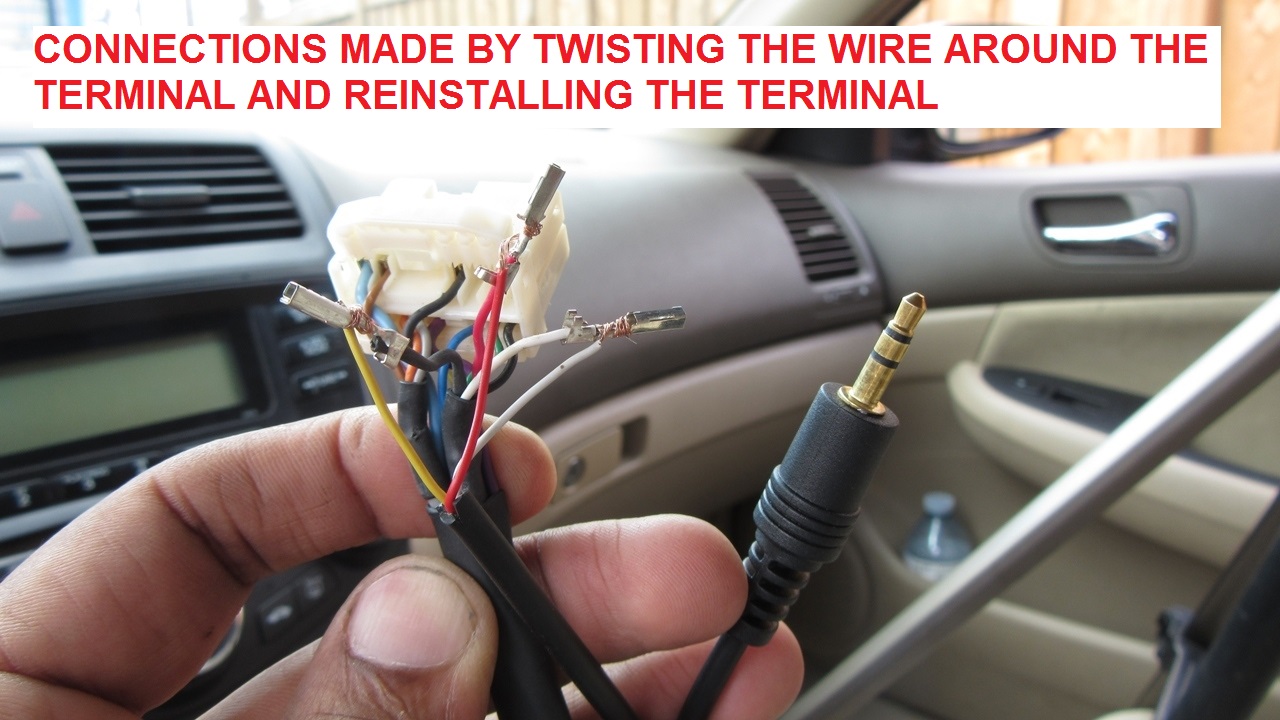 I made a hole in the console box and ran my aux wires out:

Now you’ve got two methods to hack an AUX line into your Honda Accord’s radio! This might work for other cars too, since the principals are the same.

I found that the FM aux line, while mono, gives more bass and volume. The CD changer method is much clearer, is stereo sound, but is at line level so you’ll have to crank up the volume to at least 25 to get a decent volume for driving. 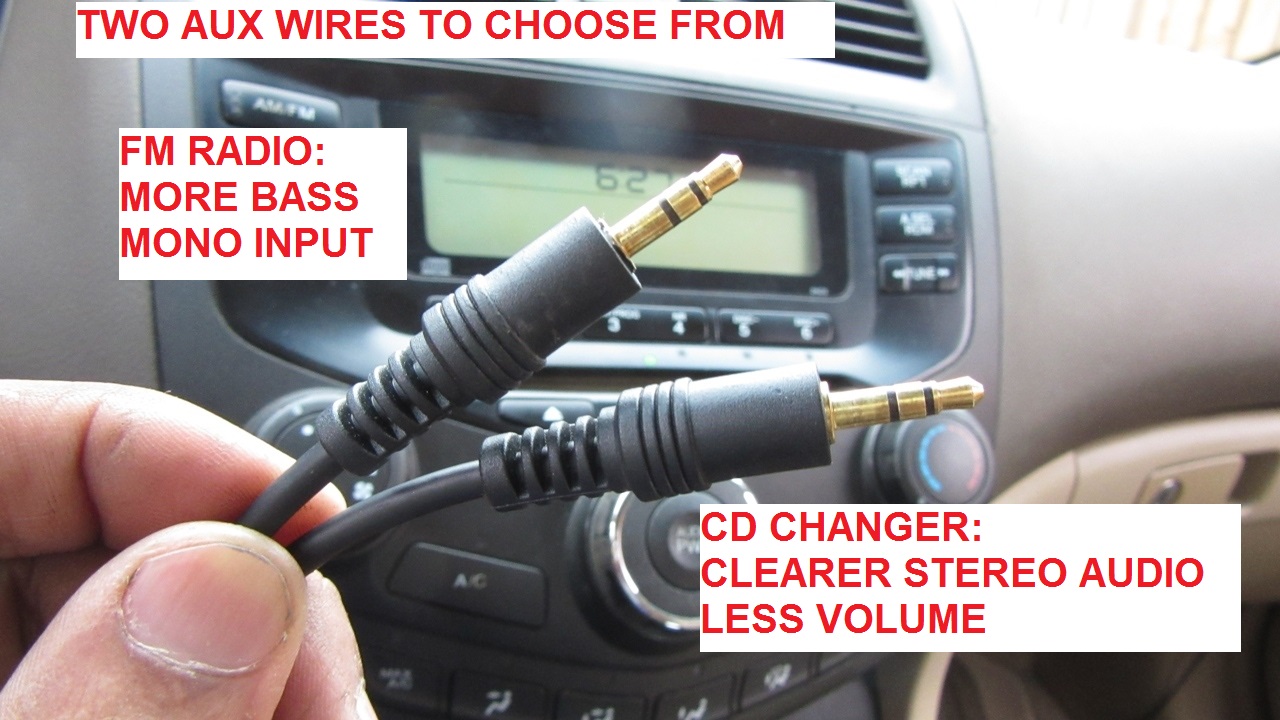 Finally you can enjoy your hacked radio that you’ve only spent $1 on! 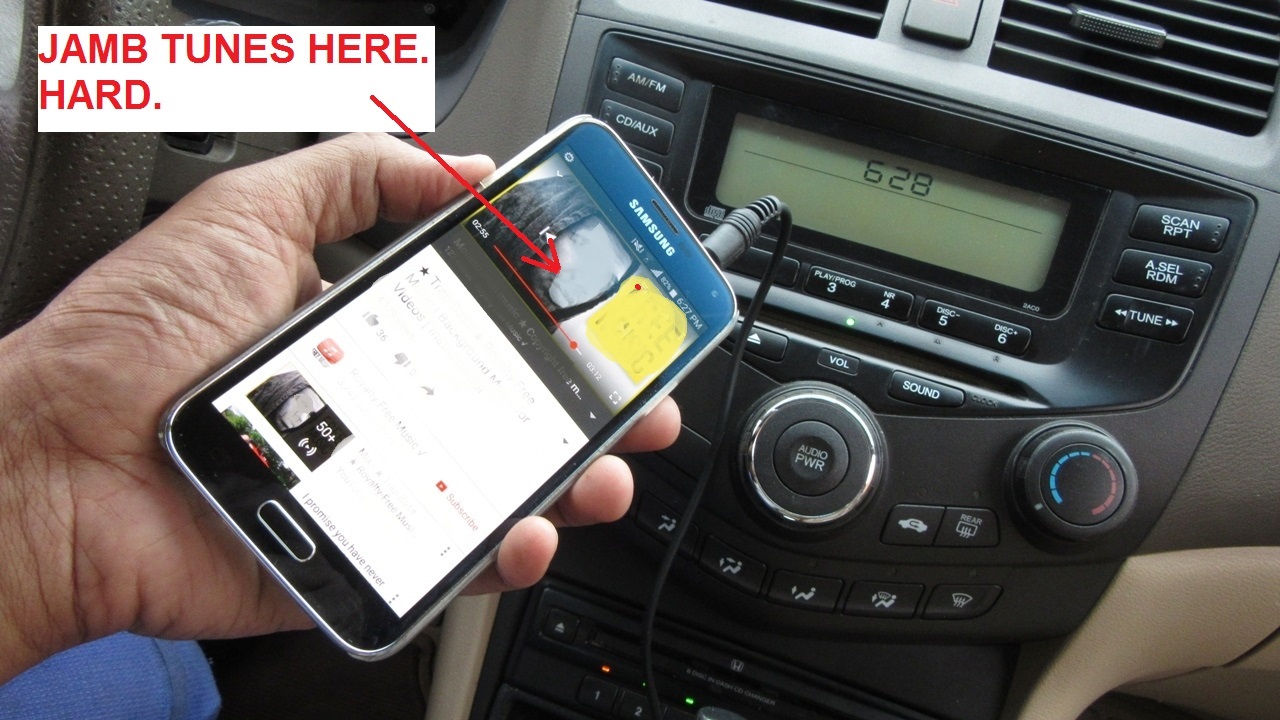 tebore wrote: ↑So you're saying that the radio doesn't use analog CD inputs at all but has it connected? What a weird design.

Yes, the board is prerouted and the sound processing unit has the capability to handle analog CD inputs, according to the data sheet. However, Honda designed the board to use the DATA port on the CD, so the analog inputs are disconnected. Perhaps other versions of this circuit board do enable that, since these board layouts aren't always purpose designed.


xxxray wrote: ↑That seems like a lot of effort

Its not that hard, especially the second method. Most of the time I spent explaining how things works. Its just 3 wires, literally.

some1not wrote: ↑ I love hacks like this. Now I just need to get a Honda Accord!

Thanks, yeah I love these electronic hacks too!
The principle is the same for most cars, not just the Accord, just solder the AUX wire to the part of the stereo that takes the input.
_______
Speedkar99 | YouTube
Nov 16th, 2016 11:03 am

Is this the same cable?

Too much of a hassle. Just plug in a USB drive to your system or use Bluetooth.

Or change your deck to one that has a USB input and an AUX input. They do sell these decks. And then sell your existing deck on Kijiji.
Mitsubishi Lancer RULES.
Reply to Thread
Back to top
Top