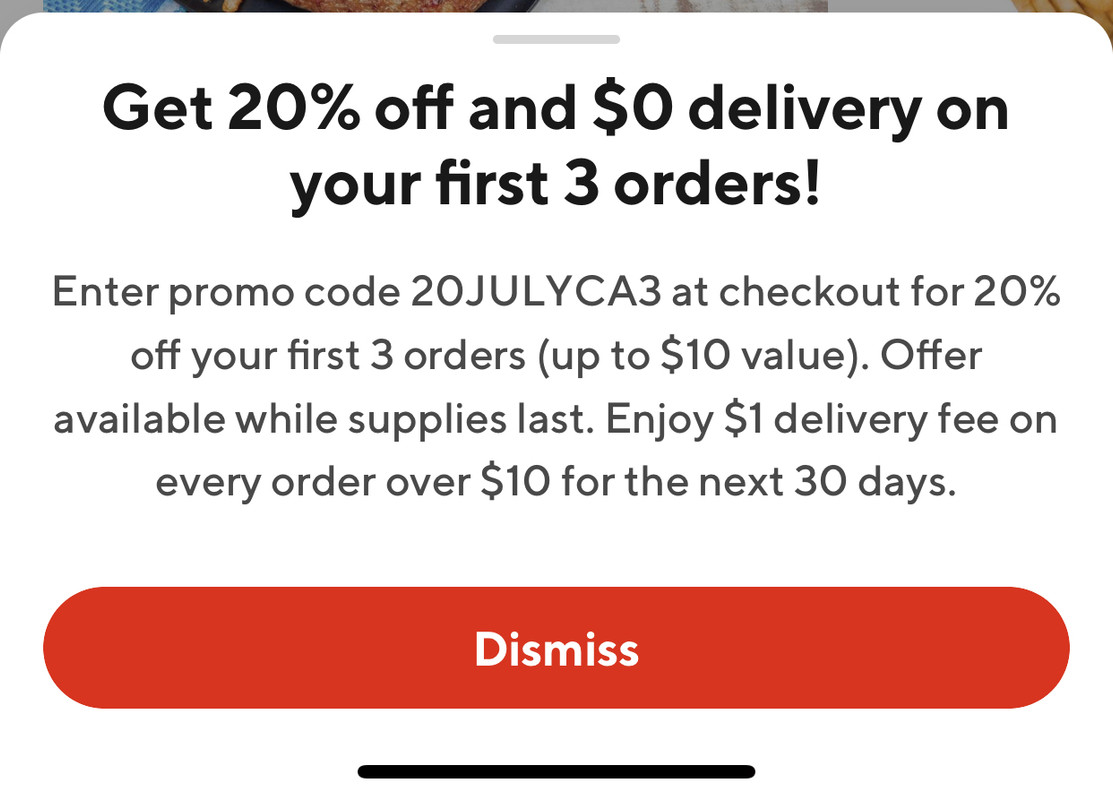 Saw this on my doordash app, get it while it lasts.

Chiming in with my two cents but ordered off of DoorDash and the food said it was ready but the restaurant was out of business lol idk if they they verify these businesses before including them on the app
TELUS 25gb/$40
Jul 23rd, 2020 4:56 pm

I think Doordash's IT totally sucks, I never successfully apply the promo codes since the first time I use.
Jul 23rd, 2020 7:17 pm

hagopb wrote: ↑ This promotion is not valid in your country. https://prnt.sc/tni286

Here is the Canadian version of the code I think

taurine wrote: ↑ Chiming in with my two cents but ordered off of DoorDash and the food said it was ready but the restaurant was out of business lol idk if they they verify these businesses before including them on the app

The restaurant has to confirm the order on the app or it gets auto cancelled.

It's possible/likely, after they went out of business, they just kept the app confirmed the orders to bank a bit more cash. Pretty sure all these app delivery companies pay out fairly quickly so they can pocket a few more coin that way. Most restaurants run on slim margins and a lot rely on quick payouts to survive.

They do obviously confirm the businesses at sign up, it's usually not free for the restaurants. But they could go out of business the next day after their confirmed, they don't do follow ups aside from the automated stuff, so yea you'll see places that are shut down there, especially in these corona days.

Yea they should do at least like monthly followups to confirm there even still open for small business, but yea they don't. I see some in Kitchener/Waterloo on there too that have been closed for months, they probably pocketed a bunch of orders and people were just too lazy to report them so they still haven't got removed. Or worse, they stall - they do reply to doordashs followups and say ya we had to shut down a bit because corona but well be open tommorow so they stay on the app.
Jul 23rd, 2020 10:00 pm

Darko2 wrote: ↑ Hmm I wonder why it popped up on my app

Same app for US/Canada, they might just rely on IP geolcation for some promotions, especially new user ones, and that's not always accurate, it might of said your IP was in the US. Mine used to report US sometimes too, other times Montreal, and I live in ontario, dynamic IPs suck.
Reply to Thread
Back to top
Top