EB Games Boxing Week 2018 Flyer has been uploaded and is available to view on the Flipp app.

Fire Emblem is a good deal if you have a Switch. Otherwise, meh.

TorontoGamerMan wrote: ↑ Fire Emblem is a good deal if you have a Switch. Otherwise, meh.

No. But when you have a backlog that includes most of RDR2, Spyro, AC Odyssey, etc....there's no immediate need to rush out and get it.

And honestly, it's been 50 at many places for over a month. So while 50 isn't terrible, it's hardly a great price at this stage of its release life.

Unless you plan on buying add on guns and ships, I'd pass on the starter kit. The digital version is a way better bang for your buck. Differences summed up at https://m.ca.ign.com/wikis/starlink-bat ... omparisons.
Dec 20th, 2018 8:48 am

Game quite literally stinks. Core storyline content including Starfox missions is anywhere from 5-10 hours, then it's just grinding with no real point or motivation to do so. It's no surprise the game is bombing and price is being dropped. Give it a few months and this will be a Dollarama find lol
Dec 20th, 2018 8:53 am

In for FE Warriors as well but most of these deals are pretty cold. All the Switch titles (with the aforementioned exception) were the same price on BF. Best Buy has some of these games but way better pricing (AC: Odyssey @ $29.99).
Civ VI I actually am just seeing now on a later page which is a decent deal for a just-released title. Dragon Quest can wait for a port to the Switch since TV time is at a premium.
Dec 20th, 2018 10:17 am

CrazyCatMan wrote: ↑ Can anyone upload pictures or a .PDF this flipp website is not working for me on any browser. 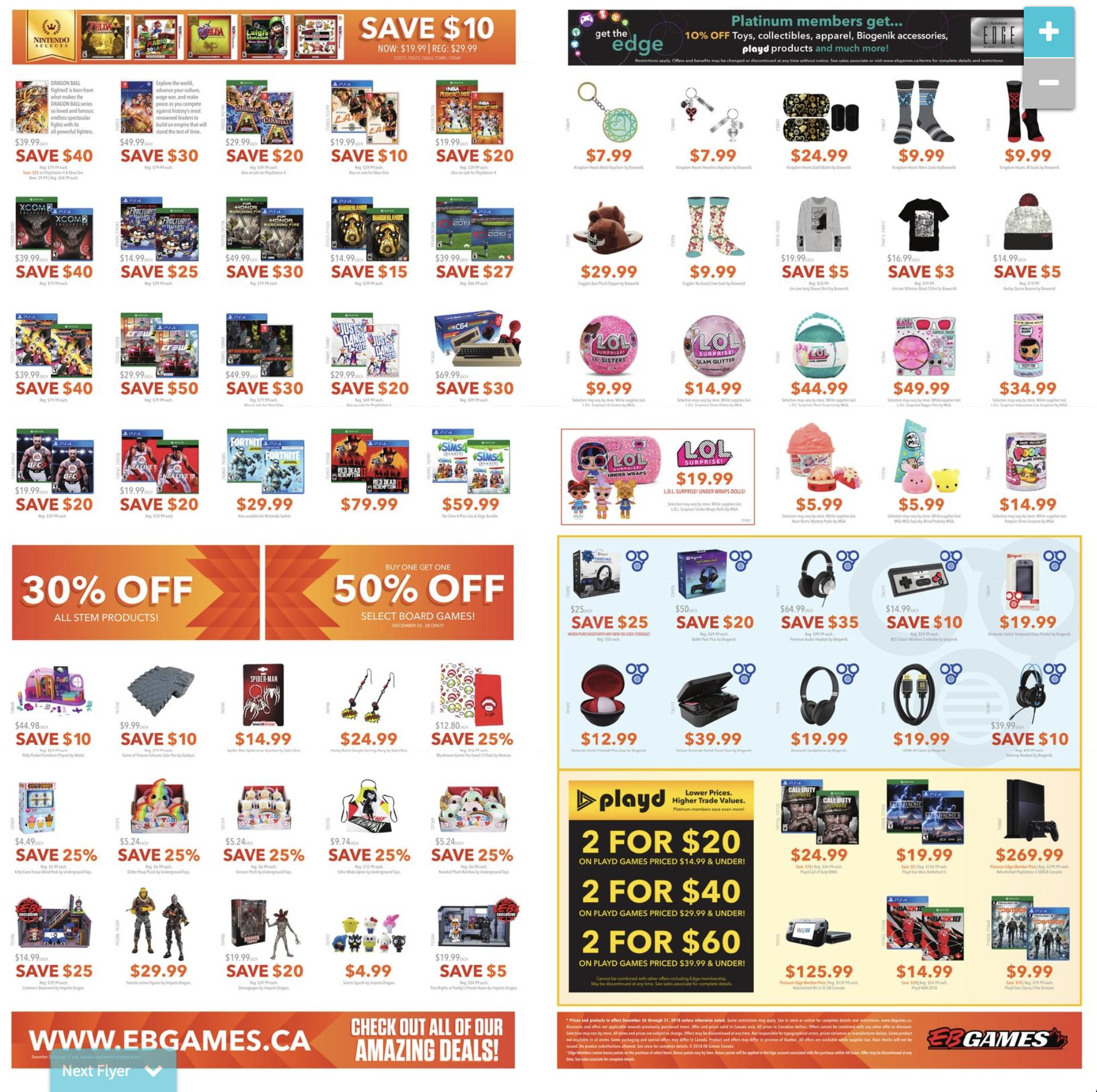 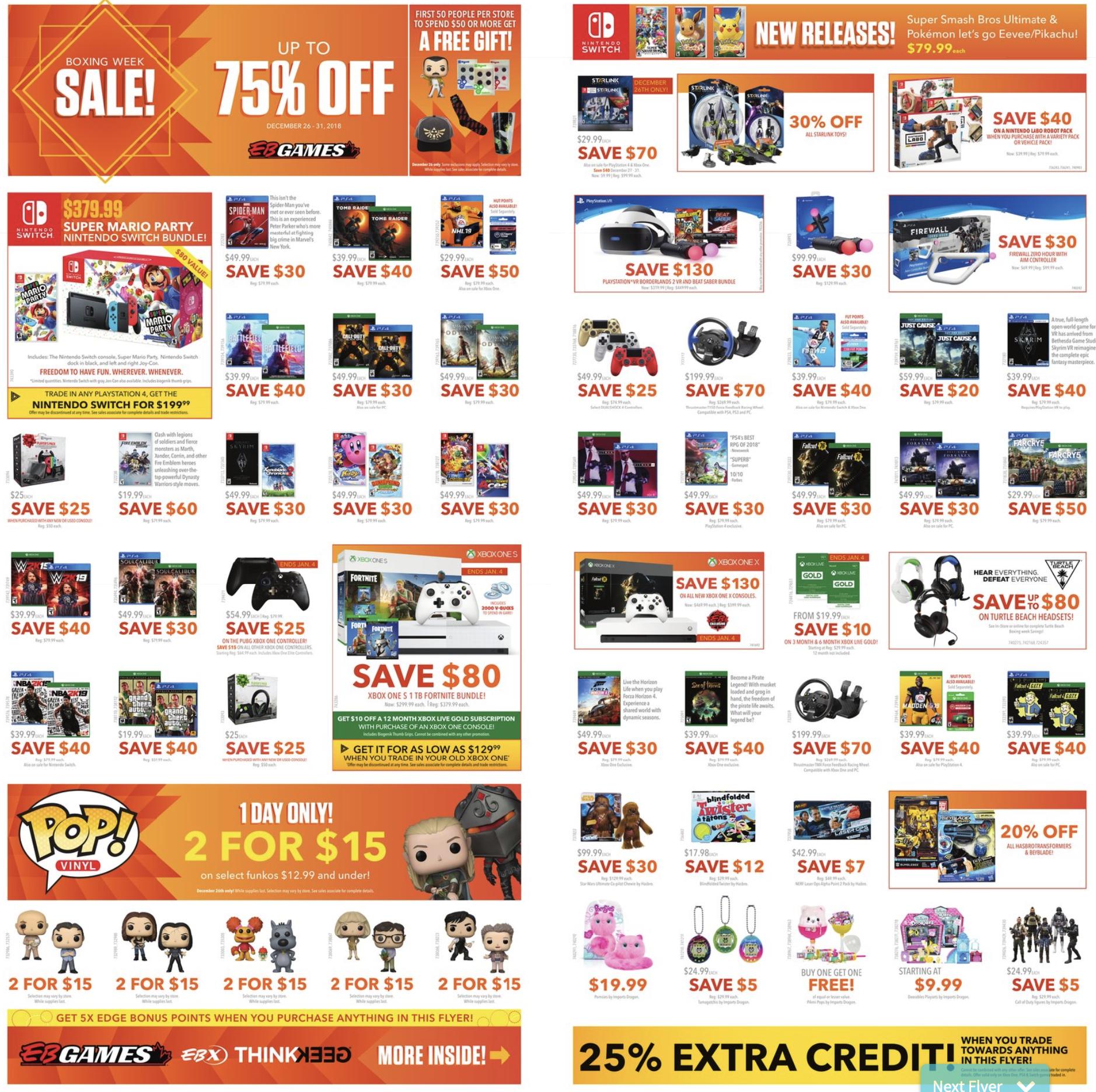 I played it and really enjoyed it. Played through the whole game and got close to 100% without the extra weapons that are paid dlc/toys. It is a arcade style flying shooter. I would personally say it is a real steal at $30. Even if you 100% it in 15 hours that is $2/hour for game time which is definitely not a bad spend for entertainment. Other people may think differently though but that is the case for any game, some people even enjoy Fallout 76...

There was also a free update to Starlink announced earlier today that adds a fair bit of content including new enemies and tasks (ie quests).


thecrashton wrote: ↑All the Switch titles (with the aforementioned exception) were the same price on BF.

Pretty sure that Mario Tennis Aces is at the lowest price since release and that it wasn't on Black Friday sales. Also Civ VI was $10 less at Best Buy on Black Friday but also near impossible to get at that price due to limited stock.

Sadly the margin on new games is practically non-existent for EB Games and the shift to digital games means fewer use titles to heavily make profits on. The chain has been consistently losing a little bit of money for a couple of years now. Part of the plan to try and slow the bleeding is diversifying into onto lines such as collectable toys like Funko Pops where the revenue margin is a little better and competition is on the minimal side of things.
Dec 20th, 2018 12:57 pm

Their Black Friday flyer is still up so you can do some comparisons.

Mario Tennis Aces was $49.99 on Black Friday.
Reply to Thread
Back to top
Top