Ever wonder what happened to all the heavily modded rice rockets?

Feeling a bit nostolgic today, so I'm watching the first Fast & Furious movie, which came out the summer of 2001 between Grade 12 and O.A.C. in highschool. We were all "car guys" with our G2 licences back then LOL... But I remember that all the "cool" cars back then we're the Integras, Preludes, Del Sols, CRXs, Celicas, Accords, Civics, Eclipses, 240SXs, RX7s and the Unicorn Supras and NSXs. The Skyline wasn't even a reality in Canada at the time.

We even drove from Whitby to the cinema at First Markham Place Plaza to see the movie on opening night. It was a literal car show and party in the parking lot before and after the movie. Absolutely packed with people, it was a movie that finally showed the import tuner scene on the big screen.

Anyways, back on topic... What ever happened to all those cars that people dumped thousands of dollars in to? Likely aftermarket parts worth more than the car itself. I'm talking, colour-shifting metallic paint jobs (before vinyl wrapping was a thing), wheels, body kits, spoilers, underglows, suspension, exhausts, intakes, turbos, nitrous, sound systems, etc... The list goes on. Did people eventually part them out, crash them, stolen/chopped and exported? Does anyone still have their tuned import or keeping it as a collector item?

I certainly don't see many, if at all any, modified Japanese imports on the roads nowadays. Surpringly, the wealth has shifted with young drivers and they seem to be buying up BMW M3s, Merc AMGs, Audi RS cars, and even exotics (Lambos, Ferraris, McLarens, etc....yes, foreign/parents' money, I know).

I still see them on GTA roads regularly ... namely, the Subie WRX and STI that I see they are fairly heavily modded, some are done tastefully and while others are not (like their aftermarket exhausts are just plain loud and maybe no substance at all).

Rust has destroyed 99% of them.

I was a teenage right around that time, so I very much experienced and was involved in that new import tuner culture.

I suspect there are still a lot of them still in good condition being stored by their owners because they can't really be taken to shows, or driven, or sold, because that style was so extreme and is now very out of date. Every now and then you see a "nice" one pop up in the classifieds.
Last edited by derass on Jun 11th, 2021 11:13 am, edited 1 time in total.
Jun 11th, 2021 11:12 am

mxthor3 wrote: ↑Rust has destroyed 99% of them.

Interesting thought.... You're probably right. Mazda's of that generation were notoriously bad for rusting out.


derass wrote: ↑ I suspect there are still a lot of them still in good condition being stored by their owners because they can't really be taken to shows, or driven, or sold, because that style was so extreme and now very out of date.

Well, just think of all the cars that would be at ImportFEST.... Where did they all go?

A lot of younger people don't drive these days and take Ubers instead, and a lot of the new immigrants now are rich and drive luxury cars instead of trying to upgrade cheap ones. I still see (and hear) some modded cars every now and again, but it's like 10% of what it used to be 20 years ago.

From what i have seen/heard majority of those people are now married with kids so they had to sell their cars and buy something bigger so majority of them are gone. The newer generation are more into other brands and modifying them. VW/Audi/BMW/Benz/Subaru etc etc because those cars already come from factory with a decent amount of power & just adding a tune can get you around another 100hp depending on the car, also they already look good from factory so people dont do as many body modifications as they used to with bodykits and so on.

Once in a while you’ll see one for sale.
I remember one is a purple supra in mint condition… the 80’s/early 90’s turbo version one. But clean.
Just stereo upgrade and rims. Not even lowered. But with the biiiiig ass booming subwoofer, you tell he was into import tuner scene back then but kept it clean. Its a turbo supra afterall, it could smoke anything back then.

If you go to the right group/car meet then you will see those cars you mentioned.

I was at an event hosted by some BMW club. Other than the BMWs and Porsches, there were a decent amount of Japanese cars you mentioned.

Another thing could be that it is not as easy as it was decades ago to have a decent life. Any younger people who wants to afford a home would have depleted their income on the mortgage, there's simply no extra income for expensive hobbies like modding cars. Yes you can DIY to save labour cost, but that requires you to have a decent garage, which would cost $$$$$ in today's market. Not to mention parking space. In a condo/townhouse/semi there's simply no extra parking space for a hobby car.

So, I guess it begs the question.... Will the people who have held on to their tuner cars try to flip them for profit as a "collector" car many years down the road. Similar to what we see today with 50s/60s/70s muscle cars at Barret-Jackson car auction?

For instance my favorite tuner car back in the day was the Nissan 240SX (Fairlady). I found an older one for sale on Autotrader (I actually like the generation that came after this).
https://www.autotrader.ca/a/nissan/240sx/bolton/ontario/19_11891579_/

Most were parted out. (Having been in the thick of it with me owning a Civic SiR when that movie came out.)
There are still a few around but 20 years of attrition means most are gone now.
But, relatively clean and unmolested examples are going for huge money now. A low-mile (stock) version of the exact same car I had sold for $50K US on Bring a Trailer a few months ago.
Jun 11th, 2021 1:16 pm

Cars and mods in the 90s were affordable. A 93 Civic CX was like $9k new and with the FnF fad+cheap cars+cheap mods, everything from Neons to to minivans got Altezzas and street fighter kit treatment. Most cars back then were all cosmetic, so dropping 10k got you a pretty wild ride.

Today, a performance car like the Type R or STI with simple bolt ons with quality parts (ie Volks, coilovers, stage 2 tune and parts) can easily put the car to 70k. There are plenty of properly modded tuner cars in Markham/RH. 2015+ WRX/STIs are dime a dozen up here. I never see the older Imprezas due to the demographic being able to afford new. Driving my GD is like a driving a relic, but my car is pretty clean it gets plenty of attention and even compliments from the supercar folks.

Like mentioned, most of these cars fell to rust. That's because back then having a winter beaters werent really a thing and those owners weren't true enthusiasts. Now, people take a lot more pride and care with their "investment" and most I know own a daily or beater to preserve their baby.

As for todays ricer's choice, it's the BRZ/FRS. Cheap, sporty looking and plenty of aftermarket support. I still see reg cars get the mod treatment, but it's a lot more subtle with just simple mods like wheels, springs and a lip kit.

We actually organized a mini meet/photoshoot few years ago to get all the 90s/early 2k (mostly) JDM tuner cars under one roof. It was pretty cool and very nostalgic. AP1, R32 S-Tune, 3000GT, FD, NSX, Supra, MR2, my s204 converted GD and a few others. I think this pic was missing a few (left or didn't show up yet). I wish I still had my modded GC which would have fit in perfectly.

The value is BECAUSE it's pretty much stock. The value of unmolested examples is generally much higher than modified cars.
*Edit to say that specific one might be a bit ambitious, but, the market is going in that direction. 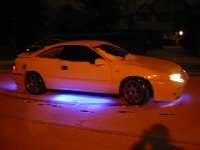 mxthor3 wrote: ↑Rust has destroyed 99% of them.

sickcars wrote: ↑ From what i have seen/heard majority of those people are now married with kids so they had to sell their cars and buy something bigger so majority of them are gone. The newer generation are more into other brands and modifying them. VW/Audi/BMW/Benz/Subaru etc etc because those cars already come from factory with a decent amount of power & just adding a tune can get you around another 100hp depending on the car, also they already look good from factory so people dont do as many body modifications as they used to with bodykits and so on.

new cars also come with decent stereos however there are still people who upgrade the stock stereo for more power.

I think pretty much that. Couple of my older friends (now in their mid 30s) had heavily modded RSX's but sold them a couple years ago for peanuts. One of them was rusted out on the rear, the other had mechanical problems (fixable, but he didnt have the time/energy as he just got married). Interestingly, both of them ended up selling to another enthusiast vs. a 16 year old kid.

Nowadays, the "ricer" culture seems to revolve around Toyobaru twins and WRX/STI. To a lesser extent maybe Nissan Z, G37, Civic SI. Some look tastefully modded, some are utter crap.

They got de-modified and sold as "classics" because people in the age group is willing to spend top $$$ for 20yr rice mobiles. I'm guilty at looking at them from time to time too.
Jun 11th, 2021 2:08 pm

And garbage cans for exhaust tips.

Frankly, to many young people these days owning a car (modded or not) is pretty low on their priority list. My son is 18 and loves cars but even he realizes that between usurious insurance premiums and maintenance/fuel/wear-and-tear, it just isn't worth it.

OP are talk about cars in 90s and early 2000. Those cars are 20 year old by now and all retired, sent to junkyard and gone to recycle metal.

Now, I agree the moddling world is not as popular as before, but still a lot of them.

FR-S are the popular one, you probably see more modded one than stock one.

booblehead wrote: ↑ I still see them on GTA roads regularly ... namely, the Subie WRX and STI that I see they are fairly heavily modded, some are done tastefully and while others are not (like their aftermarket exhausts are just plain loud and maybe no substance at all).

This is me. Guilty
Reply to Thread
Back to top
Top