I've inquired about this and they said my data plan won't change. I'm planning to Port out my phone line line when my contract is up near Christmas.
Oct 17th, 2020 8:14 pm

Sweetcute wrote: ↑ Can we cancel our main line after getting the tablet
Just keep the tablet line open for 2years

Can anyone confirm who has done so?
Thanks

I agree that spec wise, the T5 blows the Tab A. Only problem is only android 8 and it being a huawei (tin foil hat on)

Agreed the t5 is faster, but its horrible compared to the Samsung from a build quality and software perspective. I did this deal through Rogers and returned the t5 and got galaxy and I am much happier.
Oct 17th, 2020 9:02 pm

Ridinginoffice7 wrote: ↑ Don’t sell it below $300..the ads which are posted with lesser price are there to reduce the market value of the device , then they themselves will contact you ask u to reduce the price buy and resell them in other countries... it’s a 10inch powerful tablet with 4GLTE compatibility..Never undersell 4G LTE tablets ..hold on to it for few months

Shawnies wrote: ↑ Agreed the t5 is faster, but its horrible compared to the Samsung from a build quality and software perspective. I did this deal through Rogers and returned the t5 and got galaxy and I am much happier.

After 2 weeks of using the T5 after getting it for free together with the free 4GB data plan (making this my 4th tablet SIM plan with no voice plan on my account), I must say, this tablet is SO much BETTER than the crappy Samsung Tab A (2018) I had from Fido also for free (I think using Fido and these tablet plans I MADE money, by getting most of my plans with 100% or 50% discount and selling my tablets I kept getting - sold the LG Pad 3, 2 Huawei T3 and Samsung Tab A making about $650). Now I kept the T5.

For comparison, the Samsung Tab A 2018 felt like a pig. I had to disable screen rotation because every time it would rotate, it would lag up to 5 seconds. Same with switching apps, or starting a new app. Even Clash royale (one of the few games I play) was lagging. It was playable, but it was most noticeable when using emotes, taking almost double for the emote to complete.

Now this T5 feels super snappy in comparison. I can again leave it in screen rotation since it just rotates without any lag. Apps start with no lag. Clash royale doesn't lag at all.

My only annoyance with the T5 is that for whatever stupid reason (IMO), they put the camera and buttons as a landscape layout. So when I talk video, since the camera is now middle right, the other person can't know if I'm looking at them or ignoring them and doing something else. This also puts the buttons at the bottom, making it very easy to hit. This tablet also consumes a lot of power. 50% more power than other tablet/phones. 5100mAh helps, but seems to get about 4-5hrs of video. Not much of a problem now with all airplanes providing USB charging in economy when you travel. And the fact it has only a 5W charger, taking 4hrs to charge.

True to form FIDO, I just got my statement and there are NO credits. I'm over billed by $473.32 as they are charging me for everything.
Well, with a phone call, I'm now told that in 2 - 3 business days they will issue me credits for everything including the set up fee.
Phone call took 32 minutes, 18 of which was waiting on hold and then, while I'm waiting for the case#, I get cut off.
Great service FIDO. I can hardly wait for you to send me your survey for the service I received. 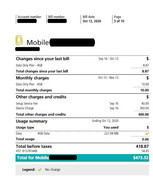 Why am I being charged $40 for the activation fee on the second bill?
I accepted the offer thru online live chat.

I just tried to contact thru online live chat again, and it is not working at all.