Hi, I need some advice on my Asus AIMesh set up. I've been having speed and connection issues the last few weeks and am looking for some help.
Setup is Rogers Ignite 1Gb with the white CODA router in Bridge mode feeding an Asus AC 66U. The AC 66U is then wired backhaul to another AC 66U in the basement. These 2 were set up for Asus AI Mesh. The issue is that I get major speed differences. Here's some tests I ran:
Rogers CODA modem - direct connection, I get around a 1gb/s down and 30mb/s hardwired and between 400-600Mb/s wireless on the 5G band.
With the AI Mesh set up as above, this drops way down to about 100 Mb/s hardwired into the one of the 2 Asus routers or 45-70 Mb/s wireless.

I've called Rogers and they say it's not on their end, they don't see any signal issues coming into my house. Question is what could be causing the massive slow down? Is there some setting I'm missing on the CODA modem while in bridge mode? or something with the Asus routers limiting speeds? i'm really confused.

Also, anyone seeing more Rogers dropouts now? I'm getting like 3-4 disconnects a day now where the CODA router just resets itself

Danzak wrote: ↑Here's some tests I ran:
Rogers CODA modem - direct connection, I get around a 1gb/s down and 30mb/s hardwired and between 400-600Mb/s wireless on the 5G band.
With the AI Mesh set up as above, this drops way down to about 100 Mb/s hardwired into the one of the 2 Asus routers or 45-70 Mb/s wireless.

If you're able to get 1Gbps from Rogers CODA modem hardwired to you PC then your 100Mbps issue has nothing to do with Rogers.

From Asus router UI, you could check the Ethernet Ports speed in the Network Map / System Status / Status. 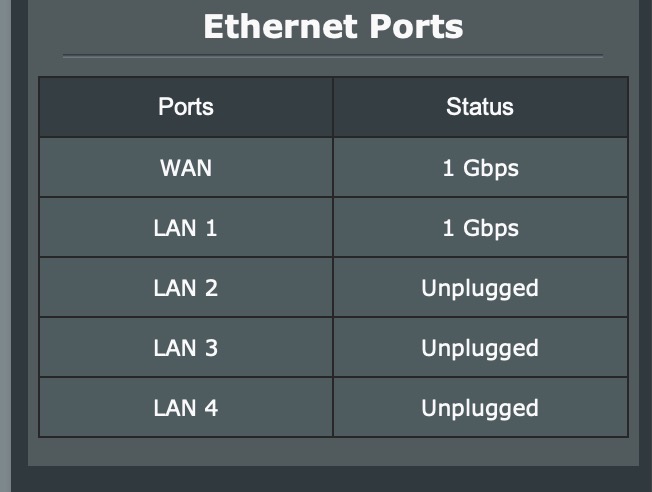 For the hardwired portion, it definitely sounds like there's a bottleneck somewhere. Are all your interfaces coming up as 1gig and did you verify you're using cat5e or above ethernet cables?


Try disabling all the features on the router like QoS, antivirus, security, firewall. Also, try to set the connection priority on the AI mesh to Ethernet instead of Auto.

Thanks. Yeah, I verified that every cable was at least Cat5e but I didn't know I can check the status of the ports, I'll take a look at that. I thought I might be missing something on the Rogers modem that was bottlenecking the connections but in bridge mode, I don't think the router really controls anything
Thanks again for the replies
Jan 10th, 2021 11:41 am

One thing to check is see if there are errors in the logs.

Both my wife and son had been complaining about regular wifi drops for a few months. When I finally investigated I found every 20 seconds or do there was a list of errors of buggy devices. It turns out there is a known error with VLAN. If you are using guest networks, clear out the first guest network and configure it as the second.

This same bug seems to impact some ipv6 modes.