Found Weber E210 grill for 325.
Picked up one since I was on look out anyways.

First post and posting in a hurry. So be gentle.

Was it this one?
https://www.homedepot.ca/en/home/p.1001 ... R4QAvD_BwE
Stay strong, situation always looks harder and that it will never end when you are in the middle of it, but remember past experiences, everything has an ending.
Feb 27th, 2018 2:17 pm 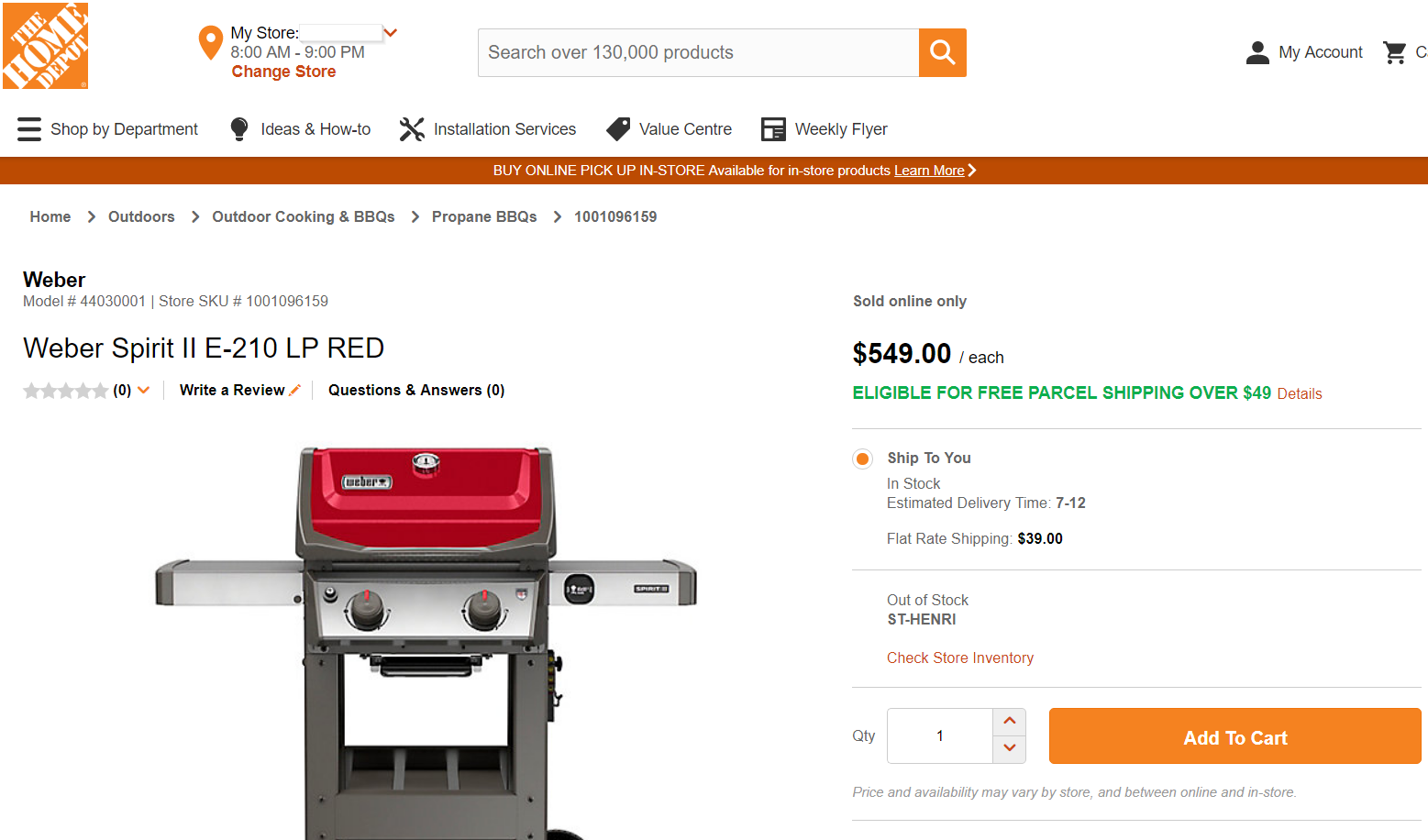 No. Last year model.
Not able to add photo on app. Will edit and add later.

Please put "YMMV" in your Thread Title.
This deal might be store specific or Managers Special.

This thing is awesome. I'm cheap and always had the cheap Walmart black one for 88 bucks. Last summer I splurged one a Backyard Grill from WM and it was a defective piece..
Returned it and bought this unit.

I will never cheap out on a bbq again. This thing is so awesome. Almost no flare ups, nice even heat. It's sturdy as eff.

Ukrainianoiler wrote: ↑
I will never cheap out on a bbq again.

Buying a good quality bbq will last you ages! I can attest to this first hand, as I went in on this Vermont Castings bbq deal from Home Depot, posted here in RFD way back in April of 2009!

You can see I was post #10 and #11, lol, but the gist of it is that this bbq was originally $800, marked down to $400 on clearance (ymmv of course). The best part was that when they were taking the beast down from the racks with the forklift, the driver punched a hole in the box and put a dent in the front door. I was like...awww....my brand new shiny bbq! So the manager agreed to give me another 10% off the sale price, so another $40 off, which was great because that would bring my price down to $360. However, at checkout, the cashier gave me 10% off the original price! So I actually got $80 off of $400, bringing me further down to $320!!

What's the point of this damn story time you ask? Aside from the fun RFD nature of it, it's the fact that this current Weber bbq for $328 is reminding me of the Vermont Castings one I got for $320 - NINE freaking years ago - from RFD. Nine freaking years later, left outside the entire time (with a good quality cover though

) the bbq is still going strong! Okay, fine, the ignitor has gone kaput (which I have a replacement for that I just haven't bothered to install yet), and I grew tired of replacing the batteries for the backlit illuminated dials....but the damn bbq fires up EVERY single time, and it is as scorchingly hot today as the day I got it! This think is a veritable tank. I am sure it will outlive me.

Sure, the Vermont Castings bbq I got had four burners, plus the rotisserie burner, and the motor included, but still. When a good bbq deal comes up on a well made unit....don't be shy folks. It could last you a lifetime

*If you wanna buy something, wait for it! Eventually RFD will post it and something in your pants will feel awesome that you waited: your wallet.*

Anyone spotted for MTL?

High YMMV! I checked couple of stores, though it's on clearance their prices were $470 and when I asked whether they would price match Richmond Hill I was told they generally don't do but it's manager's call ultimately. Unfortunately the manager wasn't there when I went.
Instagram
Feb 27th, 2018 4:52 pm

Thanks OP! All sold out at Richmond Hill South.
Reply to Thread
Back to top
Top