How NOT To Build A PC, Courtesy Of The Verge

The Verge posted a video on how to build a PC. You will find it here:

EDIT: The Verge has now taken down the video.

This reaction to it, says it all:

There are several other reactions. But essentially The Verge did a horrible PC Build and the community is flocking to take it down. It is spreading a ton of misinformation. Some issues were too much thermal paste, calling zip ties tweezers, not know what the rubber pads are for the PSU saying they are to prevent shorting out (they are to prevent vibration), and so much more. In some of the shots of the build in the video, screws are even missing.

It is hilariously bad, but people watching it for the first time for a build might not know better.

What are your thoughts?
Do you think the video should be removed? The Verge so far has disabled comments.
Do you think it is OK for a large presence like The Verge to post something like this?

If it were only a few wrong terms ...sure. But this is a how-to video by a large presence. Spreading misinformation that can do some harm, while other parts are laughable. That thermal paste was so cringe-worthy. He practically used the whole darn tube lol The guy actually ruined the cooler by screwing into it too far.

I really thought the video was made to troll or was a parody video due to how bad it was.

neverhaveiever wrote: ↑ ... while other parts are laughable

The critique was funny, and I guess public video postings by outfits like The Verge are fair game, but still - I cringe to think of someone putting the harsh spotlight glare on one of my builds like that!

Exp315 wrote: ↑ The critique was funny, and I guess public video postings by outfits like The Verge are fair game, but still - I cringe to think of someone putting the harsh spotlight glare on one of my builds like that!

I think it is different though. Doing your own build, versus demonstrating how to do a build are different things. If you said, look, guys, here is how I built this computer. And you learn from it, it is all good. Versus, look guys, here is a lot of misinformation you should trust. Oh, by the way, I don't care if you say it is wrong, I will just turn off the comments and be ignorant to everything wrong with the video. you should just trust me, kk.

Big difference between the two. I do feel bad for the guy in the video though. He will go down forever as the guy who...well...insert any of the crazy things he said/did in the video lol. He mentioned on Twitter that the Verge would not let him do a reshoot or correct anything. You can kind of tell he messed a few lines up. I am guessing the whole thing was rushed.

I don't really fault the guy in the video. It is the producing team's fault for pushing it and not allowing correction. Everyone makes mistakes.
Sep 16th, 2018 10:54 am

Reaction video is hilarious. I stopped when he said the video card is installed depending on the other components. "I will just install on the top one so I don't cover the SSD's, I just think it looks nice"

People watch this and will start installing their 1080 ti into the bottom PCIe slot running at x4 and is deactivated if you install a m.2 SSD

he forgot to screw in 1 of the 4 screws for the cpu heatsink, but I guess that doesn't really matter when he has about 3-4x more thermal paste than recommended, so it's going to get hot even with the heatsink tightened properly.

Haha, I seen this a few days back. They got burned so hard, first they disabled the comments because of all the negative feedback of how he was doing things wrong and it was a total amateur build, which could screw up a 1st timer following this video. Then they disabled the like/dislike ratio when the dislikes almost 3 to 1 were in the negative, it was hilarious. That POS video should be removed, but yea all the critiques its not even funny.

PCI-e x16 card on that slot "because it looks nice" lmao, the thermal paste was a good one. At least remove the one off the cooler you douche, you don't know what kind they are mixing. Two different kinds of thermal compound, mixing together and the fact that he put so much is definitely going to cause problems. Man just taking his quotes:


The RAM running in single channel mode was so cringe. Very dumb. Read the manual, whats the point of a dual channel kit then? If installing the modules in DIMMS A_1 A_2, its usually A_1, B_1, A_2 and B_2 ... wow so cringe.


I chose Corsair's 16 gigabyte Vengance LED RAM for two main reasons; one it has LED's and we do like lights in our gaming desktops. Secondly it's pretty fast Ram, it's 2,666MHz I believe, so i'ts pretty fast and this motherboard supports that speed which is most important.

It obviously can't be a gaming PC without RGB all over it... And 2666 ram isn't very fast.


Now which lane you choose [PCIe slot for GPU] depends entirely on what other parts you are going to put in your system. I'm just gonna pick the top one because the SSD is on the bottom and I don't want to cover it

No, it depends on which slots are PCIe vs PCI, and which one has the most PCI lanes... Not whether or not it will cover your SSD. I watched it to the end, but after just catching these few mistakes, at this point, I had to stop from all the dumb.

Did they randomly point and choose cast some random guy from the street and just assume that he was a computer genius? I do feel bad for the dude. The Verge made him a living MEME of how not to make a custom computer in 2018.

I stopped watching and lost all respect for The Verge

They lost me when they said you need a swiss army knife (as a screw driver). I feel bad, they can't even afford to use proper tools.

A rubber wrist band for grounding? Really? Where is it grounded to?
Last edited by Gee on Sep 17th, 2018 5:14 pm, edited 1 time in total.
Nothing Here 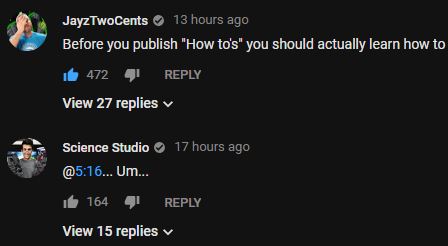 In all seriousness that video should be flagged and removed, because truth be told as Lyle said, some amateur could come across that video and really screw things up. Voiding all his warranty's in the process. Damaged rad on the heatsync, overheating CPU running dual channel ram in single channel mode, no cable management, thinking 1 M.2 SSD is enough storage without even having a mechanical HDD, smh. It's total trash.

The lack of tools is disgusting too. I mean common the cheapest bare-bones computer tool screwdriver kit is what? $10? At least have that.
Sep 17th, 2018 5:53 am