I am sure that we all noticed this covid 19 has introduced us to extraordinary economic conditions that benefit many and also push down many as well.

Of course those that benefit has mainly been those with assets and property, like real estate and stock securities.

What I'd like to discuss here is your personal experience with inevitable inflationary environment in Canada.

Just now I visited Costco and a lot of the prices seem okay. But I just purchased a 30-egg pack that normally would cost 6.45 now priced at 7.25.

That makes each egg effectively costing you a quarter.

I look at stable food that has set amount of cost mandated by the government like milk, egg, wheat, and basic commodities.

We are witnessing some of the most incredible price appreciation on so many of these resources that hasn't seen a massive fluctuation in price since 2007-2008.


I think that we are just getting started. Money velocity remains the lowest in generation which is pushing the asset prices higher. Soon or later they are going to cash out their assets and start spending like cows.

We have to remember that CPI or inflation metric set by Canada and United States are lies, tweeked to represent as little inflation as possible, and with hedonistic metric that penalizes progress in inflation, I do not trust the official inflation rate one bit. How can anybody really claim that these is no or minimal inflation? It's here and we are all seeing them in asset classes at level we have never seen.

Honestly though,
What do you think is going to happen in 2021? How are you preparing yourself and your family for incoming inflationary environment?
NOT A WOMAN. JUST GOT A WEIRD NAME. I AM A MAN. THANKS.
Share:
35 replies
Feb 21st, 2021 4:13 pm

Take what assets you have and make them appreciate above inflation. That's probably why a lot of people are now looking towards the stock markets, precious metals, cryptocurrency.

Only the ones who hold plain old cash and use plain old savings will get screwed.
<signature length too long>

You need an increase in money supply or increased velocity of money for high inflation. We have the increase in money supply but velocity has decreased countering the inflation effect. This happened after the 2008 stimulus money as well where inflation remained below 2% for years after. Where did all that money go. Real estate and stocks that increased dramatically. Usually what happens is poorer people spend their stimulus money whereby richer people invest it driving up asset prices.

Downvoted thread for clickbaity title. My wife’s dad lived through some real hyperinflation (Hungary, 1946) and that ain’t coming here.
He/him
List of RFD credit card lists
Did you get hit with customs/duties/import charges on an Amazon.ca purchase? Fight back!

In 2020/2021, cash is trash... outside of emergency fund, all in on real estate and stocks. Those with their cash just sitting in a 0.5% interest savings account will be the ones left behind. Savers are punished as usual in this country. Gotta invest!
Some say they're sick of my crap.

The title is overdramatic however,

Inflation is definitely going up by more than the BoC says. Interest rates have been too low for too long and in turn have created a horrendous asset bubble in the housing market.

On the essentials side of things, inflation on food has to be upwards of 5% per year. COVID has helped to expedite this.

Honestly I expect to see upwards of 3% inflation in general this year and I also expect the BoC to do **** all to fix it. If possible, invest your money now.

Wife is seeing this also. Compare to the same items from last year is more expensive. Even if the same item is on sale is not as cheap as last year. I haven't notice it but I did notice there seems to be less sales overall.

jacnel wrote: ↑ The title is overdramatic however,

Inflation is definitely going up by more than the BoC says. Interest rates have been too low for too long and in turn have created a horrendous asset bubble in the housing market.

On the essentials side of things, inflation on food has to be upwards of 5% per year. COVID has helped to expedite this.

Honestly I expect to see upwards of 3% inflation in general this year and I also expect the BoC to do **** all to fix it. If possible, invest your money now.

Sure, no inflation, just people over-bidding on homes by multiples of what I paid for my starter home in the 1980s, nevermind the 1000% increase in home prices.

The only thing that isn't getting inflated are salaries.

People need to start deleveraging and fight back. Save more and borrow less. In recent weeks, I watched Loblaws raise the price on Cadbury chocolate bars from $1.99 to $2.99. I stopped buying them...at least from Loblaws. This past weekend, the price returned to $1.99.

This trend has always existed... and yes, the published inflation rate is a bit muted due to shenanigans... However, I don't see things getting wildly out of control, etc.

However, the real risk I believe is more subtle. To stimulate the economy, you want low interest rates (which come with side effects... like the crazy housing market here in Canada). Inflationary pressures will create a pull to move fiscal policy in the opposite direction. If interest rates rise to combat inflation, that will mute the economy, and more importantly to Canada.... push down the housing market.

I actually believe the housing market getting pushed down makes perfect sense and should occur, but the ripple effect of that could be detrimental to Canadians in general (weaker economy and falling house prices... = increased bankruptcies, etc.) The housing market actually has been a primary driver of wealth creation in Canada while much of the rest of our economy has flatlined... take that away, or worse shrink it rapidly... and it will have broader impact.

Having said that - I'm not convinced that will occur by any means. At least not yet. A small interest rate rise muting the housing market would probably be beneficial at this point... and wouldn't tip it.

Want to learn about hyperinflation and why Bitcoin is becoming mainstream? 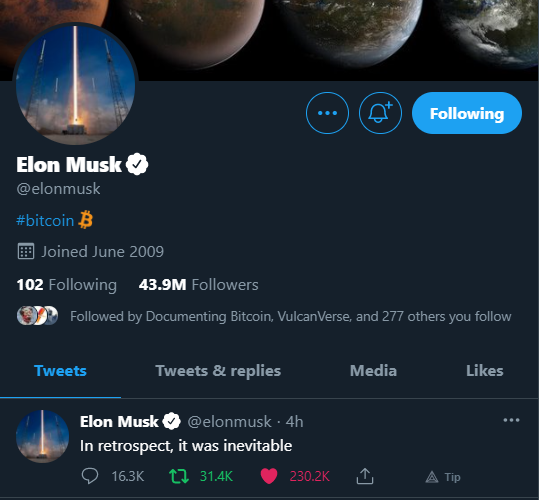 First you should ask yourself why is the the most tech savvy and influential man of our era Elon Musk has recently bought Bitcoin to place on Tesla's balance sheets.

Do you own any Bitcoin?

If you think Bitcoin is a bubble, most likely you just haven't spend the time educating yourself. Will there be a correction? Sure. But this is more of a paradigm shift of money and state being seperated.

Centralized government controlled money where it can be infinitely printed and devalued vs Bitcoin a natively global, digital, decentralized, scarce asset. (This is bigger than the internet)


From Paul Tudor Jones one of the greatest hedge fund managers in the world: “It’s like investing with Steve Jobs and Apple or investing in Google early.”

You don't need to own a whole bitcoin, it is the best performing major asset class since inception 13 years ago, it has the first mover advantage, most trust, most powerful global network of computers securing its blockchain, most decentralized, biggest institutions backing it. It is volatile so you want to have a long time horizon and best way to start investing is to dollar-cost average (DCA) on a weekly or monthly basis. Don't time the market.

Cryptocurrencies on the other hand are more of a venture bet, they are usually pre-mined, have founders and a company behind them so not as decentralized or compareable to Bitcoin.

Listen to this podcast with Michael Saylor a rocket scientist / software engineer, he recently put over half a billion dollars into Bitcoin. He's thinking long term about Bitcoin's future. He has also dedicated his domain www.hope.com as a Bitcoin Resource.

Billionaires and Institutions who are starting to get into Bitcoin: 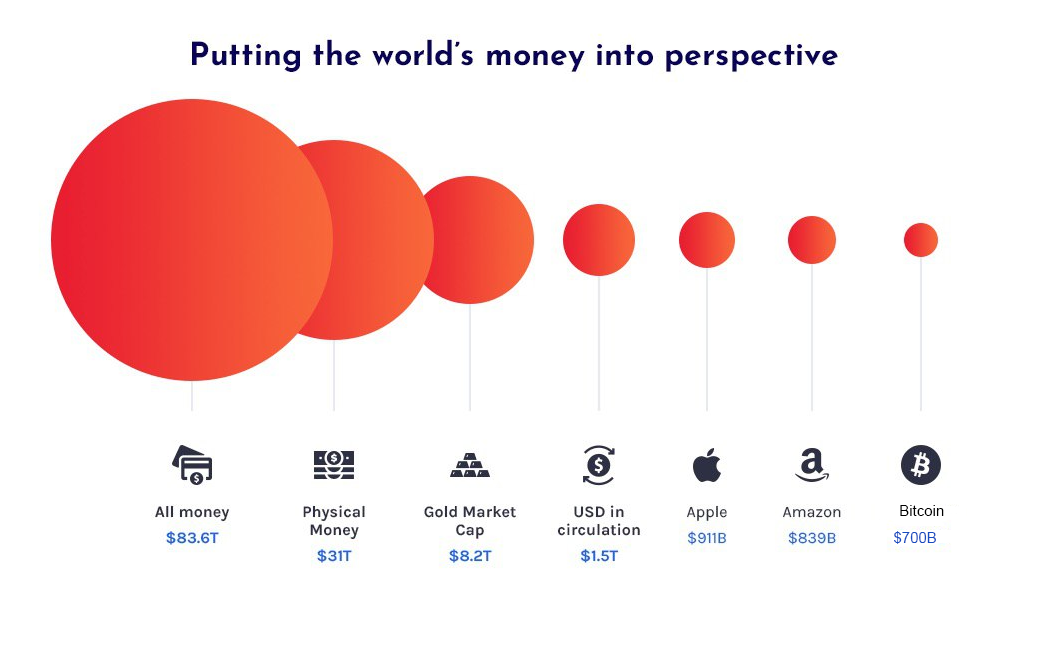 "We're going to have thousands of executives, officers...directors, & advisors of corporations coming together in the first week of February. They all want to figure out how to plug #bitcoin into their balance sheet or their P&L...We're going to open source it."

Big money is coming into Bitcoin over the next few years,

We are still VERY EARLY in term's of Bitcoin's life cycle, it could eventually disrupt all of finance. Hardcore Bitcoiners believe 1 Bitcoin will eventually be in the millions of dollars. The thing about being early in something is everyone else will think you are crazy.


Hard to believe today, but early on even Apple stock was branded "too risky" in the 1980s.
.
.
.
.
.
Bitcoin & Crypto retired | Beat the inflation: Celsius earn up to 17% on your cryptos & stablecoins | CDC CRO Obsidian card 8% rewards

Some of us think the stock market will only goes up, up and up for ever. The house price will double every couple of years for ever and the gov will spend $$$ they don't have. The hedge fund mgr selling stock they don't even own (shorting) We've being living in an artificial financial world for last 10-15 years. Tesla is worth more than all Big Car Companies in the World Combined, worth over $800 billion that has never turned a profit selling cars.

Germany, Weimar Republic Hyperinflation 1921. Those who don't know history are destined to repeat it.


You must be a boomer, cash is trash. Bitcoin is king, welcome to the new era. 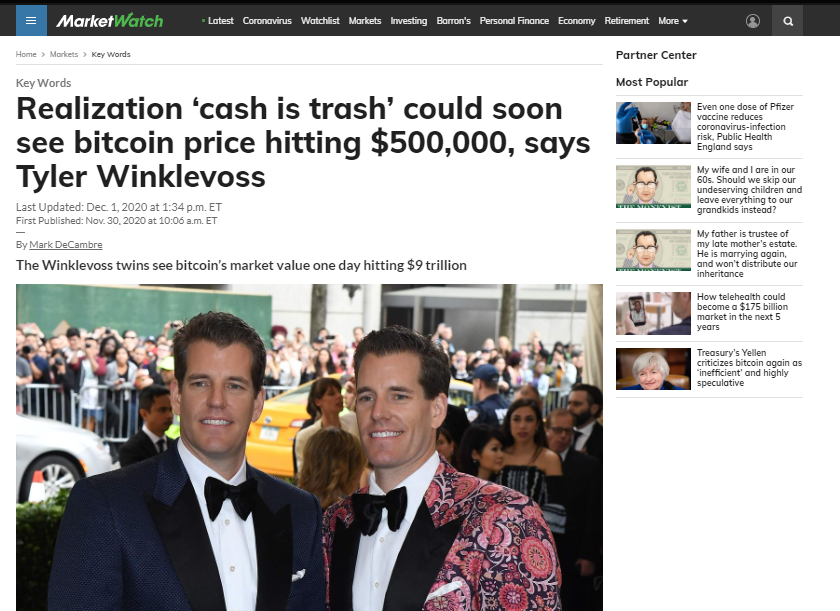 Did this turn into jcdogg's personal blog or something?

As for OP, predicting Hyperinflation in 2021 is incredibly overdramatic.

Wondering whether this thread should be moved to investing forum
Feb 22nd, 2021 4:56 pm

MikeMontrealer wrote: ↑ Did this turn into jcdogg's personal blog or something?

Statistics Canada revised its measures of core inflation less than a week after receiving negative feedback over its methodological changes.

Revisions published Monday show price pressures are stronger than initially reported. They pushed the average of the Bank of Canada’s preferred measures of core inflation to a yearly increase of 1.77 per cent in January, from 1.5 per cent in the statistics agency’s initial release.

The updated numbers come just five days after the Feb. 17 release, which included a methodological change that left economists, analysts and other market participants puzzled.

Why change the methodology in the first place?

Current methodology includes rent (government restricted) and cost of servicing a mortgage (artificially low thanks to the FED) They do not care about the downpayment (open market) requirement doubling the last 8 years or 4xing since 2000.

This is probably the best and most pure measurement of inflation, the total money supply:

About 7% a year, accounting for population growth closer to 5%. As for this year... you get the idea.
Last edited by LookingForStuffNow on Feb 23rd, 2021 8:28 am, edited 1 time in total.
RFD is hurting my wallet, too many good deals *link removed - advertising is not permitted*

jcdogg wrote: ↑ You must be a boomer, cash is trash. Bitcoin is king, welcome to the new era.

Yeah why worry about cash hyperinflating when there's Bitcoin. That's not hyperinflating at all.
He/him
List of RFD credit card lists
Did you get hit with customs/duties/import charges on an Amazon.ca purchase? Fight back!

Why change the methodology in the first place?

Absolute joke.
NOT A WOMAN. JUST GOT A WEIRD NAME. I AM A MAN. THANKS.