Saw this on Flyertalk.

For free Boingo WiFi use the deal URL. That URL says “ All eligible Canadian World Mastercard and World Elite Mastercard cardholders will receive the Boingo Wi-Fi for Mastercard Cardholders benefit.”

For free WestJet in-flight WiFi (who knows when we might next take a flight) you need to register at wifi.mastercard.com 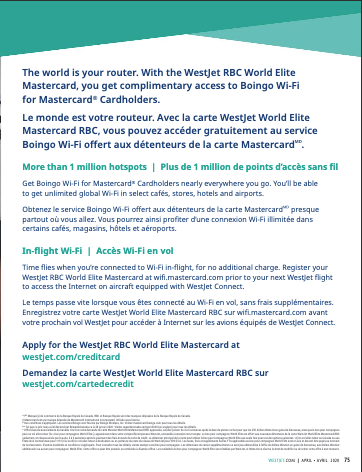 I think this works on any Mastercard, not just RBC.

Agree. I tried to construct the title to capture the free wifi with Boingo and the free inflight wifi with RBC and WestJet.

This is available on virtually every World and World Elite MasterCards, with some reports saying it works on regular MCs.

Whenever travel starts up again you can expect the boingo hotspots to be as congested as regular free open wifi hotposts. As per usual when using public (closed or opened) wifi you should always do so through a reputable vpn.

Which airlines use Boingo? Most of the ones I flew use Gogo so this offer is pretty useless

redsunsdriver wrote: ↑Which airlines use Boingo? Most of the ones I flew use Gogo so this offer is pretty useless

I used my Tangerine MC and worked!!! Thanks OP!

Just tried it with my Rogers World Elite Mastercard and it worked! Thanks OP!

I have been using Boingo from my Brim card on WestJet for over a year now. Works well, but don’t expect fast speeds.

I assume now that this has become so widespread, Boingo could eventually change the free plan to exclude in-flight. Just speculation on my part.

adm3 wrote: ↑ Just tried it with my Rogers World Elite Mastercard and it worked! Thanks OP!

Now to meet that $15,000 spend for me without summer camp or daycare fees.

so excited to use this on my next flight aka 2022

Worked with my Tangerine World MasterCard! Thanks OP!

redsunsdriver wrote: ↑ Which airlines use Boingo? Most of the ones I flew use Gogo so this offer is pretty useless

I'm not sure which airlines use it, but I do know that many airports use Boingo. It's a great way to kill time after waiting at the gate, especially in places where they don't offer free wifi and you need to pay for it.

Thanks OP. Worked with my RBC World Elite cash back card.

Most flights I have been on use Gogo. The fact that we’re still paying for Wi-Fi on airplanes in 2020 should be a crime. I get that Airlines need every cent but come on.

Sorry I’ve never heard of this company, is this safe to input your credit card??

elcheapoo wrote: ↑Sorry I’ve never heard of this company, is this safe to input your credit card??

Nice change, this was previously limited to VERY few Canadian mastercards. Brim being the main one I signed up for , mainly for this service. (And even the basic non-world, no annual fee brim card has had this since inception - couple years now).

I have a bunch of WE cards, Tested BMO, Canadian tire and President's choice, all work. So multiple no annual fee options now (Canadian Tires, PC's and Rogers are all no fee)

Regarding in-flight WiFi - main reason I got it (Brim), since I already had US amex cards with boingo - which specifically excluded in-flight wifi in their terms, while brim does allow it:

2 years ago, it was okay, it worked on most air canada and westjet flights. As it included gogo in flight wifi. These days: It's pretty bad in Canada/US because gogo has ended all partnerships with boingo. No longer works at all on gogo-equipped flights.

And in fact, doesn't work on basically any inflight wifi anymore in NA except panasonic equipped planes.

The annoying part is, neither Air Canada, nor Westjet have any sort of standardization. Most planes have boingo, some have panasonic, some even have other types of in-flight wifi. And theirs almost no way to tell beforehand unless we made a table of ever plane and what equipment they had and you searched per flight it's call sign - lots of work.

I'd say maybe 40-50% of westjet domestic flights still have panasonic, so it's not terrible for them. For there transborder/international, I think they are mostly using either gogo or newer/non panasonic systems that don't work with boingo. I had it work once only out all of my westjet trips to the US - flight to vegas it worked fairly well. Flights to NY, never.
Air canada all newer planes have gogo, so only on really old planes you might get lucky and it still has functional panasonic wifi. Can't guess the percentage since I avoid them, but my brother who flies them all the time says its usually gogo.

In the states, early on I recall united and american all my flights I got it free. These days, united has switched to mostly gogo, and they have their own layer on top/ own subscription, so I think basically none of their flight allow boingo anymore.
One semi recent american airlines flight I was able to use it.

In my travels in asia only the very rare flight would have it. Most of them used either proprietary systems I couldn't tell what hardware it was based on, or T-Mobile's german based service (Deutsche Telekom) which I think is fairly old and widespread, but also not compatible with boingo.

Airport wise, it works pretty great. Helps you avoid those annoying ad-infested personal information stealing login pages at foreign many many foreign airports. Install the passpoint to make it even more seemless.
Last edited by Eleventeen on May 19th, 2020 10:04 pm, edited 1 time in total.

elcheapoo wrote: ↑ Sorry I’ve never heard of this company, is this safe to input your credit card??

Yes, trust people on a forum you don’t know.