Mod Edit: To prevent this thread from being locked, do not offer/ask for referrals in this thread or suggest users PM you for more info. Infractions will be handed out.

Was at Scarborough Town Centre today and stopped by Mobile Klinik. They're offering Koodo 20GB for $30/month and 25GB for $35/month. The plans are usually $55 and $60 respectively but was told that you get $20 off for 15 months and $5 off for 24 months. No contract and they're waiving the $50 activation fee. You also get $100 to use in-store. Not sure when the promotion ends but it seems like a pretty good deal.

Edit: Wow. I did not think this deal would be as big as it is. It was even picked up by Mobilesyrup!

The staff at Scarborough Town Centre, when I was in there, seemed very knowledgeable and genuinely wanted to help customers. Some people have PM'd me thanking me for posting this and asking for my Koodo referral as a thank you. I appreciate the gesture but unfortunately, I'm not with Koodo. What I would ask is if you are interested in this deal, please give thanks to the staff at Scarborough Town Centre as they seem to work very hard and truly deserve a lot of recognition. Without them, this deal would not have reached the masses. Refer your family, refer your friends. Lets show them what the RFD effect can really do!

Been going through the thread and going to update some FAQs about the deal. Please read through it as a lot of questions people have been asking has already been answered below and has a lot of good information about this deal.

When does this promotion end?
This is an on-going promotion. Some people have said it was supposed to be one day while others were told it would be available till Black Friday but this CAN END AT ANY TIME! Take advantage while it's still around!

Can I get this as an existing customer?
It looks like this is for new activations. If you’re currently with Koodo you can try calling retention to see if they can match but you won’t get the $100 in-store credit. Some people have reported porting out to another carrier and then back to get this deal.

Can I get a phone with this plan during activation?
This is only if you bring your own phone or buy one of their used phones in store outright.

Can I get an upgrade with this plan and keep the credits?
You can get an upgrade but the jury is still out on whether you keep the credits. Some users have reported doing upgrades at other retailers after activating at Mobile Klinik and were told that the credits SHOULD stay but there has been no confirmation. This deal is very new from a company that mainly focuses on repairs and a new player in the wireless space. We do not know for certain what can be combined with what. If you want to trust the word of a worker who is making an EDUCATED GUESS then by all means. But this is a HUGE YMMV. I do not want anyone to lose these AMAZING credits and then not be able to get them back through customer service/retention even after returning the phone they got through the upgrade! I will update when I get confirmation.

What can I use the $100 for?
This is an IN-STORE CREDIT that can be used on any accessory, protection bundle, used phone, or service/repair. The credit applies to all activations including adding a line to an existing account. A lot of people used this for accessories (cases, chargers, headphones). It's $100 PER LINE you activate but CANNOT be combined (separate $100 credits) so you can't activate 3 lines and get $300 off a phone. You can not use it to pay your bill.

Do I get extra discounts for 2+ lines?
Unfortunately, it doesn’t seem like the $5 Koodo multi-line discount applies to this promotion

What perk can I get with this?
With the $30 20gb you can get premium voicemail, international SMS, or rollover data. With the $35 25gb you get to access to choose speed boost (ups the speed to 200mb/s) or unlimited long distance package (US, China, Hong Kong, India, Mexico, Bangladesh, and UK) as well as the other three. You can change your perk through Koodo Self Serve any time but it won't take effect until your next bill cycle.

What is the price after taxes?
I have confirmed with Koodo that the taxes is charged AFTER discounts are applied making these $33.90 and $39.55 AFTER TAXES for the 20GB and 25GB respectively!

Do they charge for the SIM card?
SIM cards are free with the activation and they do not charge for it.

What happens when I reach my data limit?
Koodo automatically blocks your data when you hit your included data (Shock Free Data) and will send you a text asking if you want to accept additional charges to continue using more. Or you can just wait till your next bill cycle to reset.

Is there an activation fee?
Usually there is a $50 fee for activation but they are providing a bill credit to offset that fee. It should appear on the first bill but might not show up till the second bill.

If I port out, how long do I have to wait after porting out to port back in to get this deal?
Some users have reported anywhere from 30 minutes to 30 days. YMMV.

What speeds will I get with this?
You will get 4G speeds up to 100mb/s unless you opt for the Speed Boost perk on the 25GB plan which will get you speeds up to 200mb/s.

Is there any cancellation fees?
This is a Bring Your Own Device, no contract plan. You can cancel any time without any fees.

What happens if I cancel before the 15 months/24 months?
See above. There is no contract and no penalties to cancel at any time within this promotion credit period.

Can I activate an eSim or is it just physical SIMs?
A user confirmed they only have physical sims for in store activation. If you want an eSim there is a $10 charge from Koodo to activate one after the fact.

Does this include free 1000 minutes international long distance add-on?
Unfortunately, just like the additional line discount, this is not eligible with this promotion. You can get it as one of your perks on the 25GB plan or add it on for $5/month.

Will update the post as more questions are asked/answered!
Last edited by xPhyre on Nov 25th, 2022 10:05 am, edited 25 times in total.
Thread Summary
KOODO STOCK FOR WALMART

HOW TO CHECK YOUR KOODO CREDITS
to see all your credits go to: manage plan & add-on > transaction history > account history. 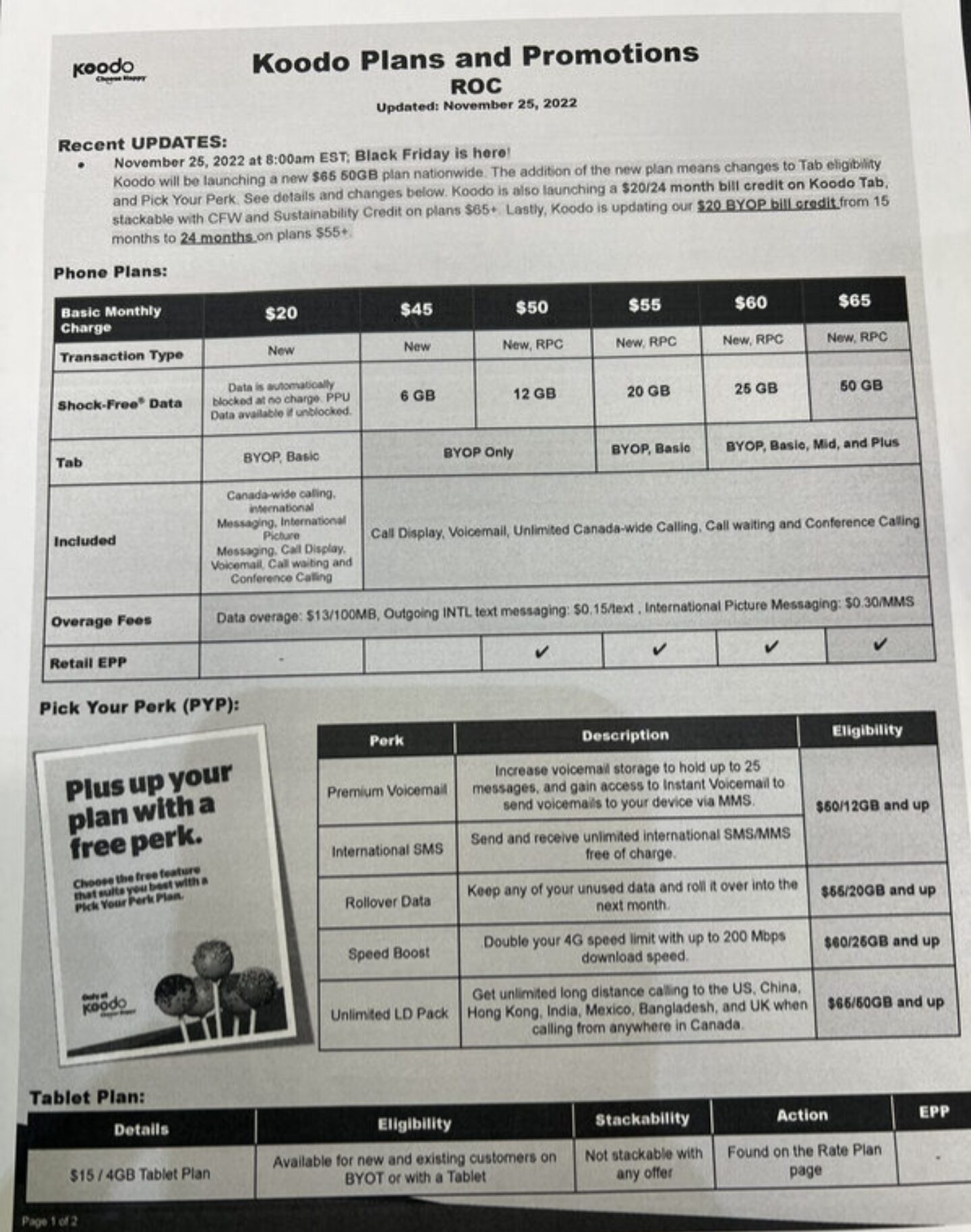 Each province has this deal, but modified depending on the province.

above plans are eligible with BYOP or may be used for Basic, Mid, & Plus tabs
NOW offering the instore credit
wasn't able to get the Pixel 6a (at MK)
sidenote, there is a new, additional plan $20 unlimited national talk/international text with no data/PPU data
2539 replies
Nov 19th, 2022 11:32 pm

everyone is offering it.

Thatdealguy wrote: ↑ everyone is offering it.

any chance of moving to this plan from a more expensive line? or do you have to switch carriers?

would prefer to stay with fido

Can existing customers on a tab get this?

Thatdealguy wrote: ↑ everyone is offering it.

Yeah, it does seem like it but the $100 in-store credit is a nice bonus.

can existing customers get in on this deal by calling customer service? currently have two lines 5GB @ $40/month...
Pixelation~

ProjectPixelation wrote: ↑ can existing customers get in on this deal by calling customer service? currently have two lines 5GB @ $40/month...

If most retailers/carriers are offering this it is definitely worth a try. You can always try and threaten to cancel worst case.

xPhyre wrote: ↑ If most retailers/carriers are offering this it is definitely worth a try. You can always try and threaten to cancel worst case.

Now when are there carriers going to let you pick up a device as well with this price...(+ Price of device ofc)...

The odd thing is that I don't see the credit mentioned anywhere in my Koodo agreement so I'm not sure if I got lied to or not.. first bill comes out in 2 days so I'll know by then I guess..

EPP only for big 3 and Koodo, I’m sorry for 10 years with fido.
Buy Nice or Buy Twice.

this seems pretty hot with a free phone. Contract is for 2 yrs?

That’s great price for koodo. Which retailer was that?
Why cannot iPhone take advantage of 5G?

a_dee wrote: ↑ this seems pretty hot with a free phone. Contract is for 2 yrs?

Yes, I just want pts, I have to choose some phone, I’m an iPhone guy. This Google phone has to go.
Buy Nice or Buy Twice.

Hsharpreet wrote: ↑ That’s great price for koodo. Which retailer was that?
Why cannot iPhone take advantage of 5G?

There are currently 4 users viewing this thread. (2 members and 2 guests)