Looking for a cable, if it exists that would project from say vga but offer multiple options on the other end of the cable for rca, dvi, vga, hdmi, etc...

Does this exist? I can't seem to find anything on startech. Would I be better off getting a usb3 to vga and would this work on macs? 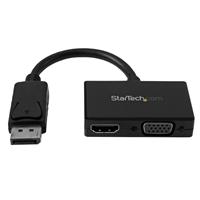 Situation, multiple laptops, some without vga that have display port, etc..., 1 projector.

Because it depends on your computer and what your desired output.

USB3... specifically USB-C adapters will only work if you have Thunderbolt.

The one you posted is for DP. Which can support HDMI or VGA/DVI no problem.
For RCA you'll need one with a converter chip.

Basically some standards can do both digital and analog over the same wire/interface. Some can't and you will need a converter in the adapter.

koffey wrote: ↑project from say vga but offer multiple options on the other end of the cable for rca, dvi, vga, hdmi, etc...

VGA is an analog signal and in order to connect it to anything other than VGA, you'll need some kind of converter box. There's really no way around it.

You will occasionally see VGA-to-RCA cables like this one. Apparently they are supposed to work with specific VGA devices, but I've never actually heard of any such device and they definitely do not work with VGA ports in general. I guess people keep selling them because people keep buying them even though they will never work. It's mystifying.

You will also occasionally see cables with a VGA port on one end and five BNC connectors on the other (specifically R, G, B, vsync, and hsync). These might actually work with specific, ancient CRTs, but I doubt you have such a thing (and I really doubt anyone makes them anymore).

DVI and HDMI carry exactly the same signals. Some DVI ports have extra pins that separately carry VGA, which is why DVI-to-VGA adapters exist. But I don't think you can simultaneously drive both a VGA monitor and a DVI/HDMI monitor from the same port at the same time.