Verdict - no brutal winter as others have said and average to above average temps to prevail, especially in the prairies.

ilovejaneandfinch Niagara falls trip, fall 2016
I am posting here the Niagara Seagull weather special and will be posting my winter forecast for this upcoming winter here.
I give weather report with Niagara falls and an unusually close range seagull as a backdrop! Seagull seemed to be enjoying loitering close among the people.


update from latest post.
read the article! Winter has been canceled. its your Christmas gift!

Winter will have a hard time reaching Montreal and may be completely blocked in Toronto for the foreseeable future!
First winter has now been cancelled in Montreal. Now Old Man winter, offended, decided to pack up and leave Toronto, leaving us Torontonians without any winter until further notice. The result of this abandonment could be serious. There is speculation snow may completely fail to reach Toronto for the rest of the year and this is already reflecting in the GFS model!

I see no chance for snow in Toronto for the rest of the year and the cancellation of winter might get prolonged into January as Old Man winter has fled to Mexico, bringing our cool weather there. His accomplice, Jack Frost has been assigned to overseeing the operation and maintenance of Santa's sleigh as well as cooling down Rudolphs nose which has been igniting lately and is unavailable to substitute for Old Man winter until his discharge from Santas workshop. those opposing Old Man winter;s decision to flee the country may appeal his decision to leave the country and in the case of a successful ruling, Old Man winter can be repatriated back to Canada where he will face a lawsuit for not abiding by the rules of Canadas seasons. If he fails to come back, An arrest warrant will be issued for him to be brought back and may be charged with abuse of control over the jet stream, a serious offence that may land him 80 years in jail and his Jet stream control license will be revoked.

And current frontal map showing current low pressure systems, fronts and other activity going on at the present:

And some Dude going crazy:

Latest NAM model showing type and intensity of precipitation for next 2 days:

More Sharing ServicesShare | Share on facebook Share on twitter Share on linkedin
Snowstorm Sunday to Monday... Another Later Next Week
January 03, 2014; 8:56 AM
Comments
Note: I will be out of town next week at CES in Vegas so no blog posts or videos.
1. While it's very cold today, the next cold air mass coming in Monday and Tuesday next week will be even colder to the point of being dangerous from the northern Plains to the Northeast. Highs may not get above 0! Lake-effect snow will be heavy, and some areas may pick up 1-3 feet of snow.
2. Snow map is up for the next storm hitting the Midwest and Ohio Valley. I think this storm will produce a large area of 6+ inches of snow followed by rapid temperature drops.
3. Another storm later next week will bring another round of moderate to heavy snow to almost the same areas. It's not out of the question that parts of the Midwest and Ohio Valley have 1-3 feet of snow on the ground by the time the January thaw hits around the 13th, which brings up the flooding issue that week. 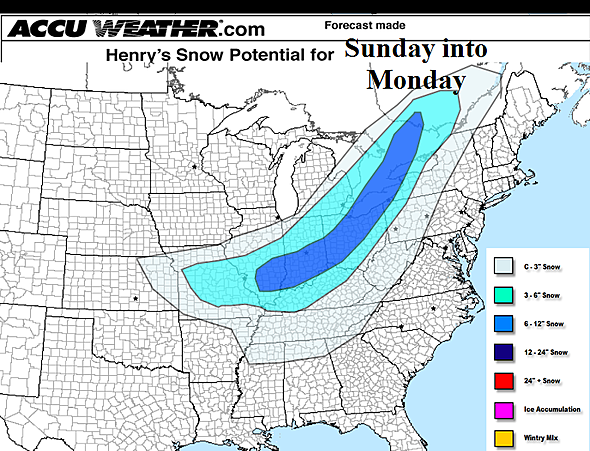 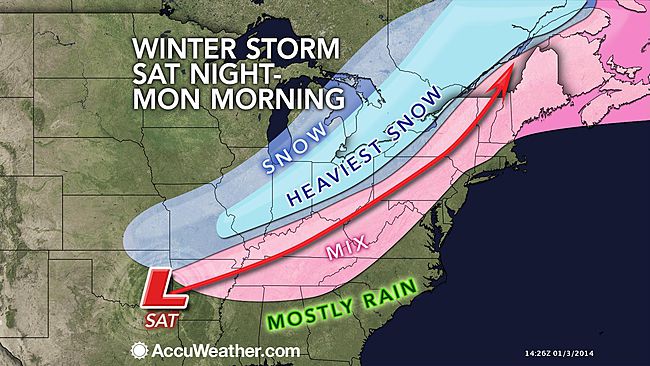 The next storm that is going to bring us even more snow. 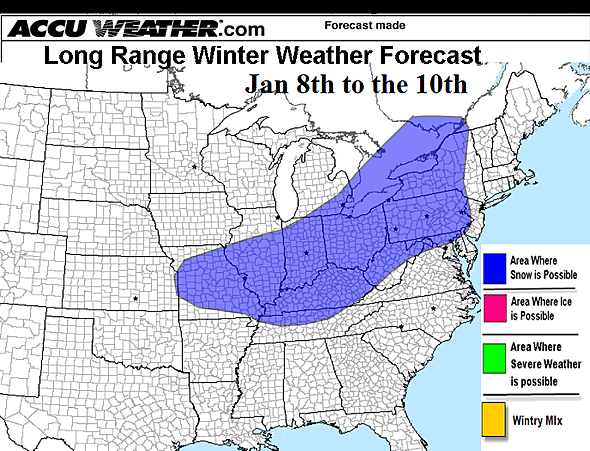 Update. All the other maps are red too in our region in the long range forecast too so that warmup really is coming 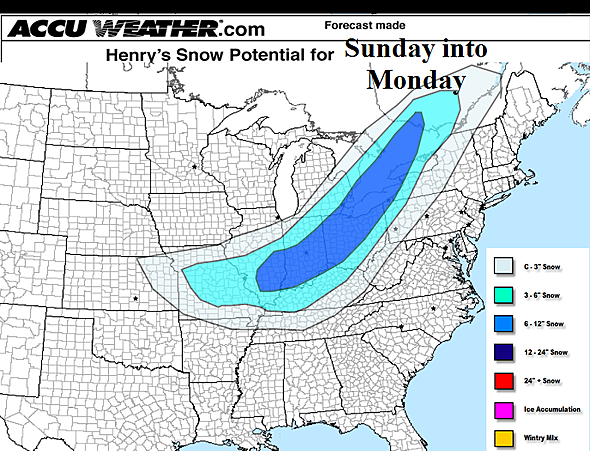 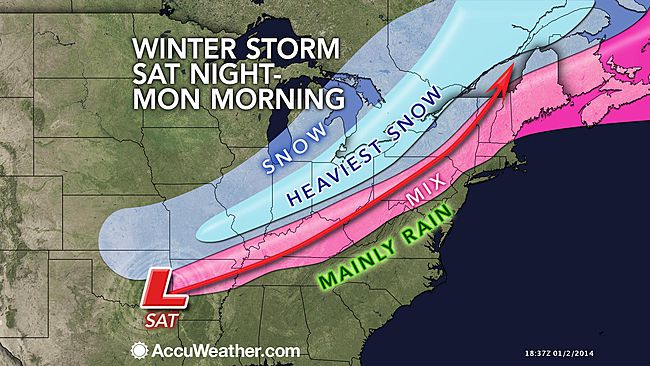 Yet another snowstorm will slam into the Midwest by the end of the weekend and will be followed by brutally cold air early next week. As bitterly cold air charges in, blizzard conditions could develop in some areas.
A cold front will approach the Great Lakes late Saturday and will set the stage for cold and snow around Chicago and Detroit on Sunday.
A new storm center will form along the front in the Mississippi Valley late on Sunday, bringing another snowstorm to the Great Lakes and parts of the Northeast.

Although there is still some discrepancy as to where exactly the low will track once it develops, the heaviest corridor of snow looks to extend from western Tennessee, northeastward through the Ohio Valley, into the eastern Great Lakes and to southern Ontario for the start of the week.
Cities that could be hit by a sudden blinding snow, plunging temperatures and a quick freeze include Nashville, Tenn.; Lexington, Ky.; Cincinnati; Morgantown, W.Va.; Pittsburgh; Buffalo, N.Y.; and Toronto, Ontario. Travel along I-40, I-64 and I-65 could be difficult Sunday night.
As lake-effect blends in with the general storm, some bands of intense snowfall are likely.
According to Senior Meteorologist Dale Mohler, "Blizzard conditions may develop from eastern Ohio to West Virginia, western Maryland, western Pennsylvania Sunday night and Monday, and in western New York Monday into Tuesday."

Whiteout conditions are possible in these areas with strong winds, plunging temperatures and heavy snowfall rates.
"Major interstate highways including I-79, I-80, I-81, I-90 and Route 219 could close down for a time due to the intense conditions Monday into Tuesday," Mohler added.
Some people could be caught off guard and stranded by the storm.
A dangerous cold wave will blast in its wake. The new wave of frigid air will reach the I-95 Northeast on Monday.

My favorite things posted by other users in the weather thread: Here is my Preliminary White Christmas Forecast for Canada. All areas that are a pale whitish color I predict to have a White Christmas (practically encompassing the country right across from coast to coast). The only areas I do not expect to have a white Christmas are shaded in red and are indeed very small. Other areas I predict to get their snow easily shortly before christmas day, but it will be luck for it not to be wiped out by rain, so these areas, also not very extensive are shaded in blue. The rest of the country I included in a forecast of unlikely to not get a white Christmas. Due to my forecast of an unusually cold December, I predict even Metro Vancouver to get a good chance at a white Christmas, but it is in the blue zone where luck is needed for rain not to wipe out the snow before Santa comes down the chimney.
This forecast comes on the heels of forecast models showing an unusually cold December from coast to coast witch raises the chance of a white Christmas significantly above normal all around Canada. This forecast for a cold December is the reason why I almost completely covered Canada in white. Such a widespread white Christmas has happened before in Canada and is more likely to happen this year than in more typical years. 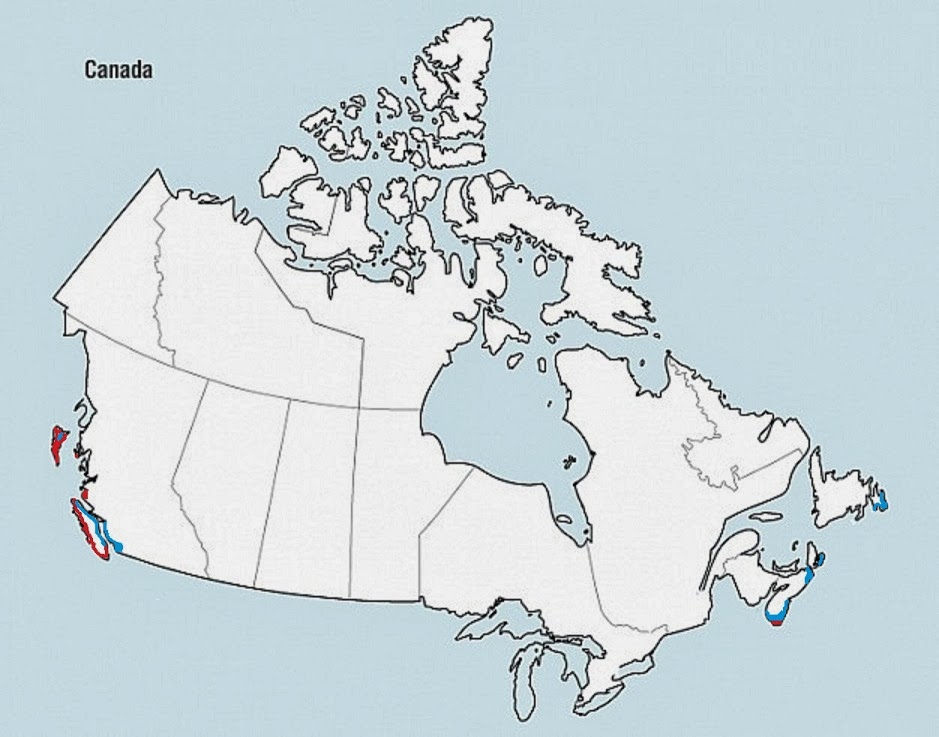 Note that all of Ontario currently looks to have a white Christmas, so does all of Alberta.

This thread is now in storm watch mode for the event of a potentially significant wind storm commencing within 24 hours in the GTA and surrounding areas. Storm watch mode initiates when there is an imminent threat of severe weather that has the potential to cause property damage/losses, widespread difficulty relating to the conditions, injuries to people exposed or any combination of the aforementioned.
Last edited by Ilovejaneandfinch on Jun 16th, 2019 9:54 pm, edited 64 times in total.
Share:
20416 replies
Apr 24th, 2013 3:15 pm

They can barely predict the weather from day to day. No way this prediction is any better than their day to day forecasts. LOL
Apr 24th, 2013 3:23 pm

Although long range forecasts can sometimes be even easier though because they are generalized average conditions predicted for a broad time period instead of specif timing needed in daily forecasts. Here strong signals like el nino and pacific temperatures and weather blocks in greenland can suggest wheather warmer or colder conditions are favored over a period of time. In this case, signals show that cold is probably going to invade toronto much easier than last year, it is just specif days are not given.

So anyone that really used the heat from last year, should be concerned that they will likely not be able to nearly as often this year.

When they say cold summer, do they mean temperatures in the teens? Or temperatures a couple degrees lower?
A life spent making mistakes is not only more memorable, but more useful than a life spent doing nothing.
Apr 24th, 2013 3:45 pm

This is so true. I don't really believe anything they say anymore. I'll look at the weather the day before, and when I wake up, I'll decide what the day is going to be like.
Apr 24th, 2013 3:53 pm

sandikosh wrote: ↑When they say cold summer, do they mean temperatures in the teens? Or temperatures a couple degrees lower?

It would generally be around the 20's teens are very uncommon in july and august. Cold is just relative. It willl always be warm enough for t-shirts, but sometimes we can even get a july that never reaches 30 degrees. Also, these summers tend to be those that make things get rained out more often so that is why it is not a nice summer. They can also increase the likelihood of tornados, flash flooding and thunderstorms.
Apr 24th, 2013 4:00 pm

coltonbauman wrote: ↑This is so true. I don't really believe anything they say anymore. I'll look at the weather the day before, and when I wake up, I'll decide what the day is going to be like.

But as I said earlier, daily forecasts can be hard. In fact the daily forecasts might get wrong more than the long range ones (which are not specific to the day) as the weather flips. what does not change erratically are those patterns long term like the one we are in now - a cold one. there are things like El nino that make it much easier to predict a long range trend than daily conditions. That is why I don't just dismiss the long range trends because of bad daily forecasts. And besides, it is not like they are really wrong as much as people think. People just notice more when they are wrong, and when they say sun and 13 like yestarday and it happens, people just forget about it and enjoy it.
Last edited by Ilovejaneandfinch on Apr 24th, 2013 4:00 pm, edited 1 time in total.
Apr 24th, 2013 4:55 pm

Edmonton has been terrible so far this spring. I think today is the first time we have reached into the double digit temperatures so far this year.

Still 2+ feet of snow in the fields, finally starting to melt.

Colder in the Great Lakes

booo if it rains/snows too much