More offers from Dollarama
Not sure if this even a deal, but $4 for eneloops seemed ok.. I just noticed the white tops and thought they might be eneloops, correct me if i am mistaken. 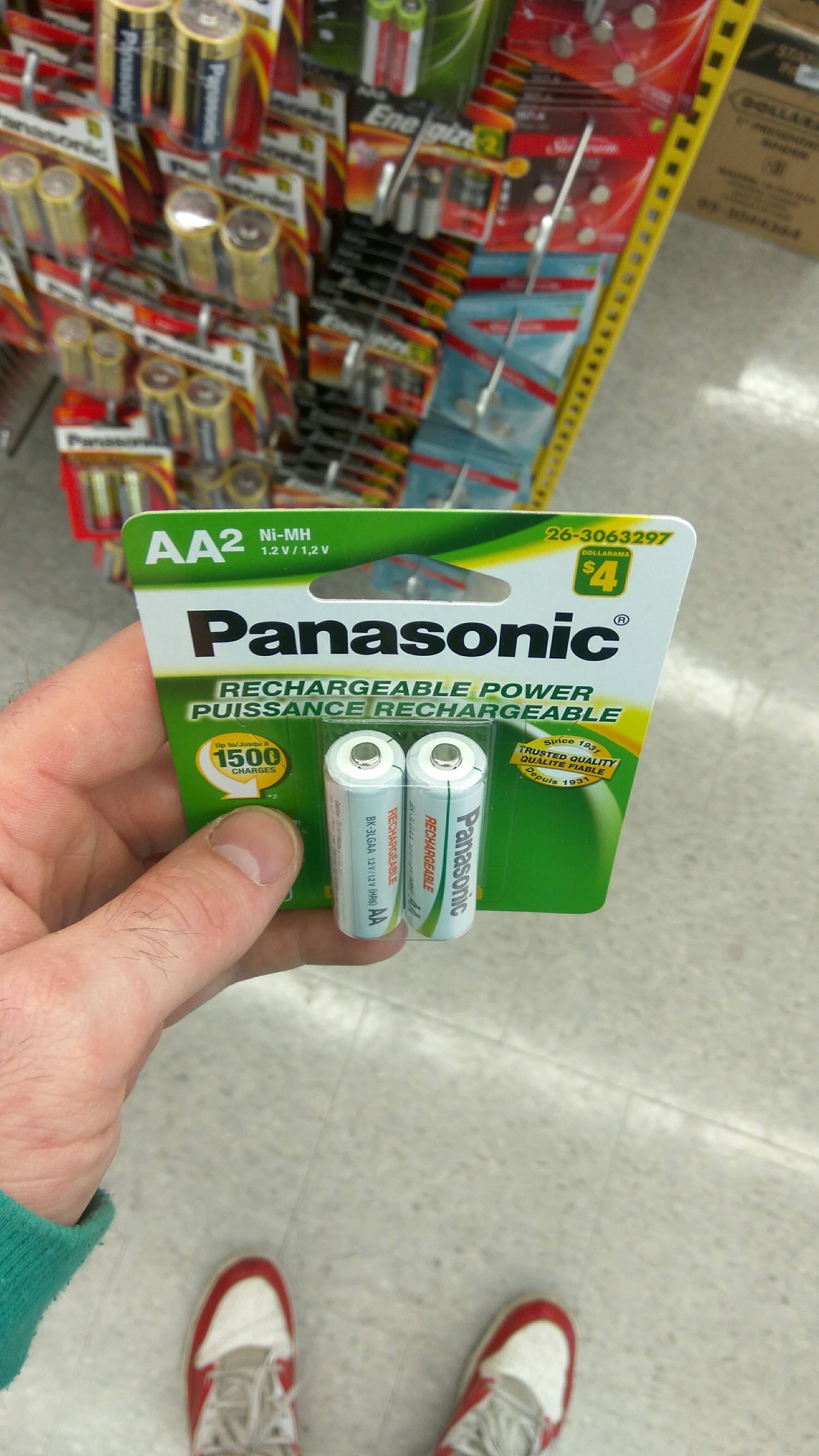 I saw these as well. I just googled BK-3LGAA and couldn't find anything. I'm not sure these are eneloops, but yo, for 4$, that is a pretty good deals for rechargeable batteries.
Apr 20th, 2017 4:56 pm

honestly, I only shop at IKEA for batteries

Going to see if they're at my local Dollarama.
It's possible it's Eneloops. Panasonic doesn't make rechargeable batteries. Someone else makes it for them.

Here's a rule of thumb when shopping at Fourdollararama:

if there is no sticker (the price is printed on and it's produced for dollarama exclusively) then it's guaranteed to be a cheap-chinese-crap-knockoff.
My last and final digital game I purchased at PSN from those Sony Devils was on November 22, 2020 - Ban that Sorny!

My last and final digital game I purchased at PSN from those Sony Devils was on November 22, 2020 - Ban that Sorny!

Standard AA eneloops should be 2000mAh.

I think the packaging on the re-brands say they're "pre-charged NiMH", since the eneloops hold their charge longer than standard NiMH batteries.
Currently For Sale: --
Apr 20th, 2017 5:32 pm

I'll see if I can find them in my area and run a capacity test on them vs Eneloops.

Here are some past capacity test results made using a ZB2L3 V2.1 (https://www.aliexpress.com/item/1-2-12V ... 93433.html) and don't account for lifecycle or standby discharge. Tests were ran down to a cut-off voltage of 0.8V. Of particular note are that of the Dollarama Panasonic batteries the Alkaline batteries have roughly 2.5-3x the capacity of Carbon Zinc batteries, so on top of being prone to leaking and ruining devices the cehapo Panasonic Carbon Zinc batteries at Dollarama aren't such a good deal based on capacity.

Yikes, even at 4 bucks for two cells, for the given capacity and origin of manufacture, avoid at all costs.

Chinese made NiMH cells, from AmazonBasics, Panasonics, and even Eneloops should be avoided. In comparison to their Japanese counterparts, FDK made, they perform much worse over time and will have half the useful life of a cell that is made by FDK. There was a post on CandlePowerForums, which one user did an accelerated discharge and charge cycles (0-100%, 100-0%), Chinese made Eneloops typically hold the same amount of charge out of the package as ones that are made in Japan, but, lose their capacity much faster (as much as by 50%) given a high amount of cycles (abnormally high for most users, but still relevant).

I believe the Panasonic ones are comparable to the Ikea (low capacity) ones: http://www.ikea.com/ca/en/catalog/products/20303874/

However, the Ikea ones are selling $4.99/4pk at the moment, which is a better deal than this. Other Ikea LSD rechargeable batteries: http://www.ikea.com/ca/en/search/?query ... le+battery

If you look closely at the package on the right, the battery does say "Made in China".

Wow. Someone with an eBay account should post a question on the item asking "Are the 2 holes in the packaging Dollarama Logos that were cut out?" so anyone looking at the item can see.

I have the old Sanyo enloops. Does anyone here know if the charger will work on any ni-mh rechargeable batteries? I got the ones from the source for 8$ and not sure if I can use them on the charger. Says only to use enloop batteries
Apr 20th, 2017 7:29 pm

at only 1100 mah, those are probably little AAA batteries inside a AA-size empty shell.

My last and final digital game I purchased at PSN from those Sony Devils was on November 22, 2020 - Ban that Sorny!

CantMissADeal wrote: ↑ Wow. Someone with an eBay account should post a question on the item asking "Are the 2 holes in the packaging Dollarama Logos that were cut out?" so anyone looking at the item can see.

Note: The seller may include your question in their item description

I really wish the 'rama would bring back the NiMH AAAs they had many moons ago.
Reply to Thread
Back to top
Top