Thanks OP. Hard to say no when people are selling used MadCatz TE's for more. 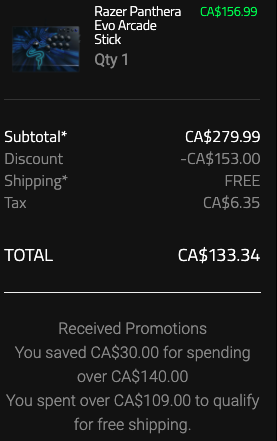 r1val wrote: ↑ Thanks OP. Hard to say no when people are selling used MadCatz TE's for more.

Im currently using a madcatz sf4 te Xbox 360 fightstick. Is this an upgrade?

Here is the template to print your own artwork:

Signed up for email subscription and completed my profile. See post right after OP.
Not sure if it helps that I signed up awhile back when the Razer Phone 2 was on sale, didn't end up pulling the trigger on that phone.
Last edited by r1val on Feb 26th, 2020 12:54 pm, edited 1 time in total.

$150 isn't much to spend but I'm trying to justify this deal lol.

It's on par, if not better. Both have Sanwa sticks, just different buttons.
I currently have a 360 TE, PS4 Hori HRAP 4 Kai. Couldn't pass this Razer stick up, it'll be the cheapest one I've bought brand new.


equin0x wrote: ↑ this or the Neo Geo Arcade Stick Pro?

Two different applications. Neo Geo has built-in games if that's what you're looking for. Razer for a high quality stand-alone arcade stick for a great price IMO.

I'm no stick expert but I've been told that this particular stick has cheaper parts and break easily. Maybe not just the buttons and stick which are replaceable, but perhaps the wires and stuff too. The fact it's nearly half off not even a year into its release probably says something. The original Razer Panthera (which is also on sale but has the Dragonball artwork if that matters) or other sticks from Hori or Qanba use better parts.

ChrisE45532 wrote: ↑ The fact it's nearly half off not even a year into its release probably says something.

Guessing they're just clearing stock to prepare for a PS5 version. Not clear whether an update would be just for marketing (this one is plastered with PS4 labeling) or for (in)compatibility reasons they need to release new h/w for PS5 (à la Logitech G27-->G29 fiasco -- I got burned by that one).

Jumped on the bandwagon as not many PS exclusive fighters so can simply use on PC if this one turns out to be incompatible with PS5.

Wow I already have two Madcatz TES+ sticks I almost never use from Amazon price error back in the day at 164.99 each... but when the Panthera EVO was back in stock for a minute there I couldn't help myself and ordered one of these, too, with the extra $30 discount.

Back in stock again. Looks like they restock in the early mornings.

Thanks OP and Coupon guy!
Reply to Thread
Back to top
Top