Need reco on what product and how to mount without compromising view of road.

Currelty using this from CC, mounted on the right hand about 2 o'clock position: https://www.iottie.com/Product/Detail/9 ... martphones

Con:
- Sticky suction cup kept falling off, mostly on hot days. Currently testing with various bonding agents to make it stick.
- Mount not invisible behind phone; consumes windshield view. The upper arm join takes away view, or, the lower arm does not lower enough that the phone could be flush with dash contour
- Does not support charging

The only product you'll ever need to mount your phone properly, securely and the most robust method available.

They can get a bit pricey. It's not the average $5 made in China suction cup.

Suction - leaves a mark on the windshield anf obstructs view

Magnetic - bulky cases, not for heavier phones and moves around during bumps

Dash mounts - only good if you have a flat dashboard and still obstructs view. 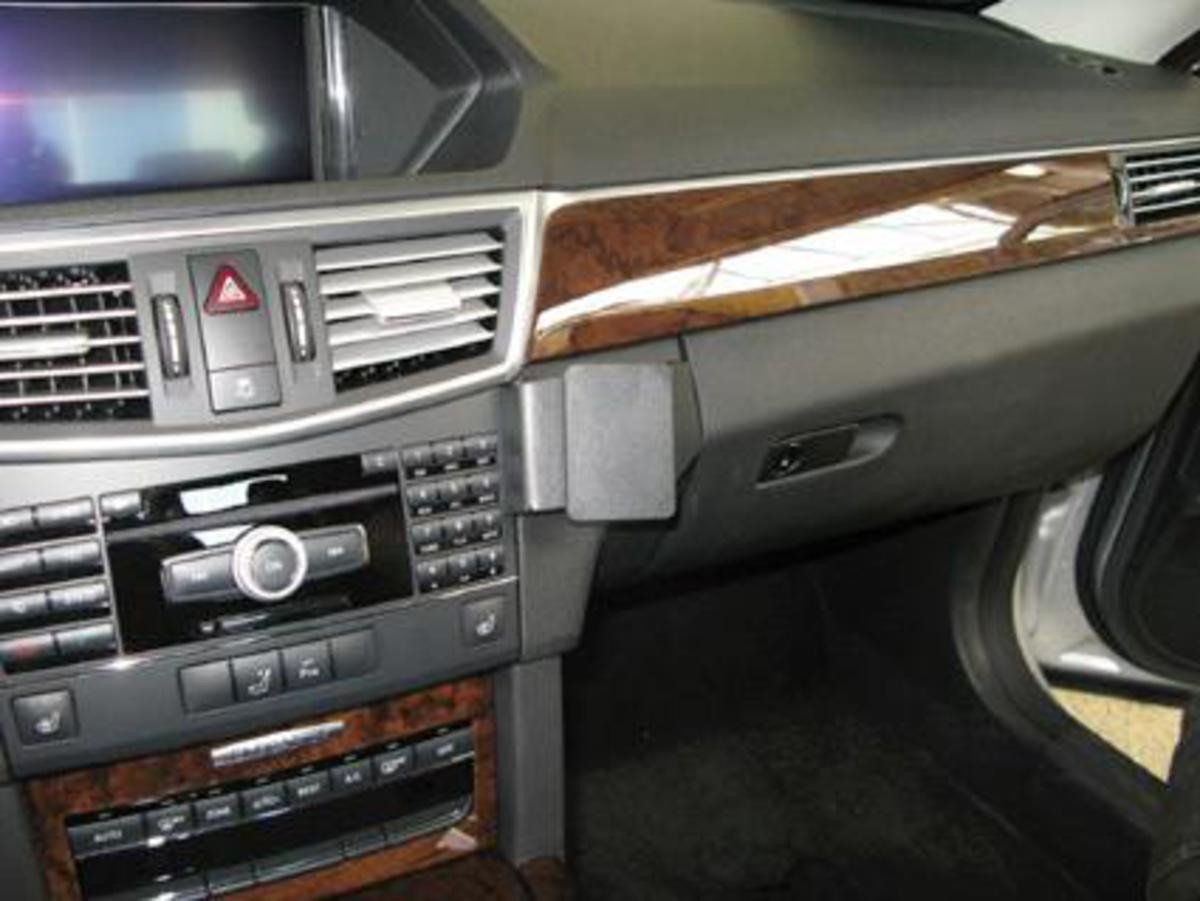 I think I have exactly the same iottie smartphone mount as you (and mounted in landscape/sideways) because an iottie I have with only two gripping ends broke at one of the arm. I now know better to stick with this design where it won't slip on three sides instead of just two.

I use a flat disc with 3M double sided tape with VHB (very high bond) built into it. The disc was finally coming off after months of use and my mistake was that the single strip of tape that came with it only covered around 45-55% of the disc base and I didn't bother adding more adhesive. I have a Note 4 with the original Samsung cover so it's not going to be as light as some newer phones.

I was surprised that the dashboard surface wasn't damaged at all when I slowly removed the disc and the residue. That disc has been on the car for at least a year but maybe because we use the sunshade and the because the adhesive is underneath, UV rays doesn't really get to it so easily. I put 3M double sided tape with VHB again but this time covered the entire base of the disc. The mounts' sticky suction was a little damage on the periphery because it was stuck so hard to the disc but once I had it off, I cleaned it under running tap and reset it so that i is completely stuck to the disc. I can imagine how some people complain about their dashboard surface being damaged if this suction pad is attached directly to it.

On my daily driver, I have a different mount. Because it's an old car and I didn't care much if the dash was damaged, I just put the 3M double sided tape directly on it and then stuck the smartphone mount on top of it. It hasn't come off. The disc is about $5 to 6 so I didn't want to waste money. I had used two discs on the newer cars.

The reason why I'd rather have the phone on the dash is I don't have to take my eyes off the road when checking for directions. I know it partially obstructs my view but I've learned to just ignore unless I'm looking at the screen. Because it's not mounted on the windshield, there is less obstruction (i.e. it's closer to me but it doesn't really block my view of the windshield.

I did think about vent or magnet mounted but it would have blocked air flow and I would have to glance down to view it. I think all you require is a disc to stick on to your dashboard if you are okay with it being on the dashboard.


I got my tape from amazon.com years back and still have lots of them (2 rolls but I only use them sparingly). If you can meet met at Bay/College, I don't mind giving you some length that would cover two or three discs.
https://www.amazon.ca/s/?ie=UTF8&keywor ... juer63qz_e

disc came with one of our Garmin GPS and one smartphone mount but it's just a disc:
https://www.amazon.ca/ARKON-AP036-Adhes ... VDRMHX12E5

I have the same one as the OP too

I installed mine onto the top of dashboard area instead of mounting it onto the windshield
Mine's set so the phone is in landscape mode..
The black tab thing moves up and down so I can charge the phone no problem

It obstructs the view a tiny bit

There is a type that you can mount using the CD slot
I had one before and it works great. Not using them anymore cuz it blocks part of my nav screen (screen and cd slot are too close). There might be some newer models without this problem.
Oct 5th, 2017 1:41 pm

Mine came with a dash pad that goes between the suction cup and dash, did yours have one? It has never fallen off.

It's mounted in front of A pillar, easily readable and does not obstruct any view, charging cable routes nicely above steering column. 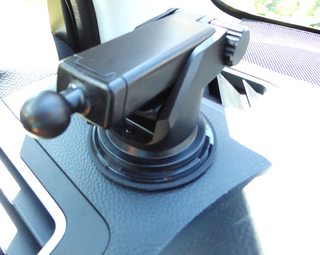 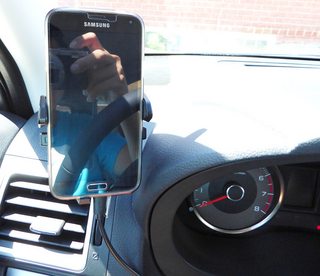 mountek, do you have a cd player slot you are not using. THe mountek goes into the slot.

I use a Steelie mount which has two parts. One is a magnetized ball that is stuck to the dash (mine is beside my stereo) and the other is a round disk on the back of the phone/case. It works fantastic and you can buy replacement adhesives/extra parts.

https://www.niteize.com/product/Steelie ... nt-Kit.asp
If you drive dangerously I hope you get caught and lose your license/car/dignity!

The kenu vent clips and their clones work well, are cheap, take almost no space and very easy to move from car to car 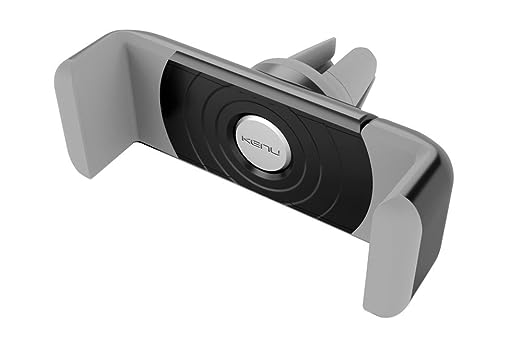 l69norm wrote: ↑ The kenu vent clips and their clones work well, are cheap, take almost no space and very easy to move from car to car

If I'm travelling, I fly with the clip in my pocket. It fits in any rental car. If I forget it in the rental car, it's not a big deal as they are cheap (like under $10)

Been using the kenu airframe for a while now. They also have different sizes depending on how big your phone is (i.e. iPhone 5 vs iPhone 6 Plus).

Key thing to note for this vent clip is that if you car does not have a option to "block" or turn off the vent, it can overheat your phone in the winter time. So just make sure you block your vents or not have heat come through the vents!
Oct 6th, 2017 12:58 pm

Here is my solution:
Because I am taller, the top of the phone is actually below the window line, so my view is unobstructed. I can still see the car stereo screen, and I just use the steering wheel volume, instead of the dash knob.
I am using this mount, purchased during one of their regular '90% Off' sales.

I use a Ram Mount X-Grip with the suction cup to the windshield. As long as you clean with windshield properly (i.e. with glass cleaner) before installing, it stays on no problem. I've been pretty happy with it since I don't like to have to look down far from the windshield to see my phone (i.e. as you would if you had it attached to a vent or in the CD slot). I have it mounted on the left side and in such a way that it actually blocks out *very* little of my view.
Oct 6th, 2017 2:01 pm

i use something like this: http://www.thegadgetstore.ie/flexible-t ... older.html , but $3 at the dollar store

clipped onto trim at the bottom of my steering wheel then i bent it to my preferred location, beside my gear stick.works pretty good
.
Oct 6th, 2017 8:12 pm

l69norm wrote: ↑ The kenu vent clips and their clones work well, are cheap, take almost no space and very easy to move from car to car

If I'm travelling, I fly with the clip in my pocket. It fits in any rental car. If I forget it in the rental car, it's not a big deal as they are cheap (like under $10)

Some other considerations:
1. For suction mount keep falling off, I washed the suction cup and applied regular paper glue, so far so good. Next I might try household wood glue. My dash surface is visibly non-smooth but it did worked, just not sure if it'd survive summer. Gluing is suboptimal as I prefer the ability to use same mount on rentals.
2. I filed off some materials so the joint can have larger degree of freedom. So I am able to push the mount half way below dash line and completely below hoodline. Still, the upper joint still blocks some view above hood. Now I just adjust the seat to sit up straight but it's uncomfortable on long trips. It may not concern most people, but my intention is to remove any obstruction that will distract/take away any compromises to pedestrian safety thus astronomical liabilities & lawsuits.
3. Not sure if it's the dominant hand, it's less disorienting for me to look to my right hand side than left.
4. My car can't take CD slot mount and vent mount would be worse position than 2 O'clock dash mount. But your suggestions may help others.
5. Anything automotive is more complex, temp, vibration and collision i.e. if the mount will fly or be propelled by airbag into someone's face during collision.