How can VIN numbers be deceitful again? I read something about that.

alanbrenton wrote: ↑ How can VIN numbers be deceitful again? I read something about that.

Is that Bloomber tracker based on VINs?

You can register VINS for cars that aren't yet produced. Thus, you can give the perception that you are making a lot of cars by registering lots of VINS but its a different story as to whether or not the VINS are actually assigned to the produced cars.

The bear theory is that Tesla artificially inflates VINS to mislead the market; the less malicious theory is be that Tesla isn't just greatly organized and tends to over register VINs so they always have a VIN to assign to a car ("never ascribe to malice what can be explained by incompetence").

The Bloomberg tracker is based on VINS.
Keep calm and go long

Thousands of cars delivered in a single weekend.
Doubt there is a demand problem.

Tesla doesn't even have leasing options yet on the Model 3, if they had trouble selling them, they'd offer leasing.

31% drop in deliveries secured. This is even with the additional European and Chinese markets that were not available in Q4.

Only 63k M3's were produced vs ~ 81K estimated via Bloomberg model.

Because of the lower than expected delivery volumes and several pricing adjustments, we expect Q1 net income to be negatively impacted. Even so, we ended the quarter with sufficient cash on hand.


Given that Tesla vehicle production currently occurs entirely from one factory in the San Francisco Bay Area, but must be delivered to customers all around the world, production could be significantly higher than deliveries, as it was this quarter, when production exceeded deliveries by 22%.

Sounds like the demand is there. I wonder for how long when the Germans start offering cheaper BEVs. 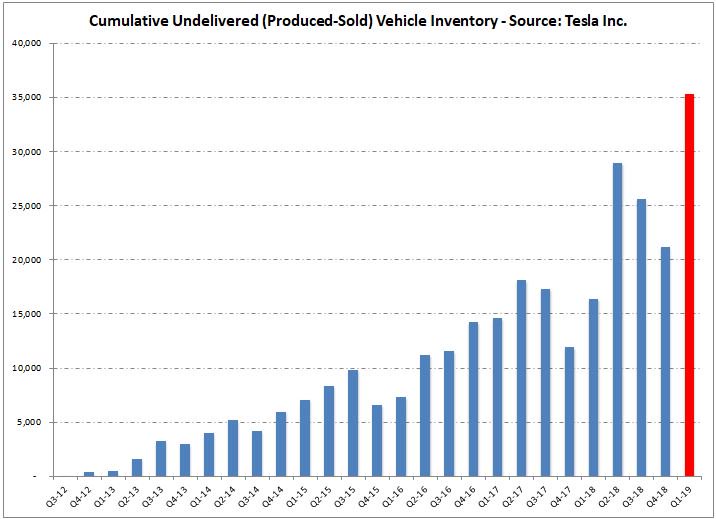 Time for another "bail out" by Panasonic??

Hashtag built-to-order, what a farce

Dude sounds like Elizabeth Holmes and we know how that ended up...