All the people who bought @ $3k 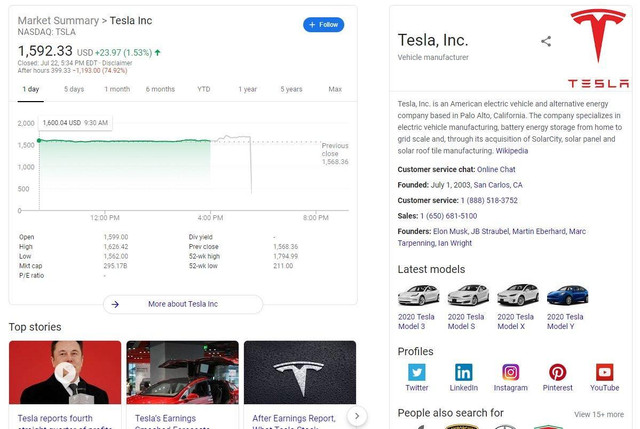 When would we expect the S&P500 to include TSLA?

Do you think it’s too late to jump on the bandwagon?

Sold all my 5 shares are 1605 lol. Might buy back in later? maybe lol...gonna be interesting to see how the S&P inclusion will impact it.

crimsondr wrote: ↑ When would we expect the S&P500 to include TSLA?

Do you think it’s too late to jump on the bandwagon?

I'm still holding mine. I may sell when profits pay off my Model 3

rfdrfd wrote: ↑ You should have bought it today
It was a high probability

Seems to moving in the opposite direction. What happened to the expected pop? lol Probably already priced in.
Jul 23rd, 2020 11:48 am

Going to hold shares until after the announcement of S&P500 inclusion.

Charles wrote: ↑ selling regulatory credits.... I'd be concerned that could change with the stroke of a gov't pen saying credits cannot be resold

Um, Chrysler signed a deal for $2B in credits, so it's not like that money is going away.
And the credits are just icing on the cake, allowing Tesla to invest hundreds of millions in innovative AI chips, FSD software, supercharging network, mega casting for Model Y rear (avoiding hundreds of parts) and more.
When Tesla continues the roll later in 2020, you'll see credits being a more minor player, and 2021 the credits may be gone, but Tesla will be at 700K/year run rate of production which will mean solid profits without credits.

The issue of regulatory credits (separate from the expiring EV credits) came up a few years ago when the stock was trading much lower. I let that narrative shake me out of half my position and I never got back in.

Institutions were cashing out of Tesla and moving to other cyclical or safer companies. It's been happening to other tech companies too. Plus the overall market is selling off.
Current Fido and Rogers customer.
Ex Koodo customer.

Less Junkie and 1 notch higher than the equivalent S&P rating.

There are currently 4 users viewing this thread. (1 member and 3 guests)