So who is getting it day one? Anybody able to secure the Collector's Edition or are getting the Spider-Man PS4?

I haven't been this excited for a game since God of War PS4. I think it's going to do extraordinary. We'll find out tomorrow; the review embargo for the game lifts tomorrow at 10am EST.
Share:
106 replies
Sep 3rd, 2018 7:03 pm

Spider-man might outdo Shadow of the Tomb Raider with critics,
but it seems unlikely since this is Insomniac's first attempt at a licensed superhero game.

I have the Collector's Edition of Spider-man pre-ordered from BB. Also a $50 standard version from Amazon, if that one does not ship in time.
Amazon de-listed it from their website so maybe they are not going to honor those pre-orders.

I watched and like the Spiderman movies except for Spiderman Homecoming.
That movie seemed more like an Ironman movie to me. Other than that, I never read any of the comic books these superhero movies
or games are based on.

I haven't been this excited for a Spider-Man game since I played Spider-Man 2 on the PS2. I'm hoping this game can bring back some memories of free roam web slinging around New York City from those days.
Sep 3rd, 2018 8:15 pm

Just beat Prey again (man what a game) so I'm all set for this. Between Spider-Man and Dragon Quest XI, I have no idea how I'm going to play RDR2 before Christmas. I just don't think its possible. What a great time to be a gamer!
[Complete Forum Rules] [BST Rules & Guidelines]
Sep 3rd, 2018 8:57 pm

87 on metacritic, Sony has another hit!! I can't wait.


This until RDR 2 and then Smash in December is all I need for the rest of the year!


Graphics actually improved over the E3 2017 and E3 2018 demos. Usually games get downgraded in graphics
compared to the reveal trailers. The opposite happened here.

RiftOfChaos wrote: ↑ 87 on metacritic, Sony has another hit!! I can't wait.


This until RDR 2 and then Smash in December is all I need for the rest of the year!

gundamwingZero wrote: ↑ Still nothing from amazon...as expected...
Shows will ship sept 5 and yet, still no charge in my card...

Always does that for me. Says mine will ship today too. Spoiler, if you live in an area where you can get an item in less than 24 hours (which you probably do if you're in BC), it'll probably ship out late Thursday and still arrive for Friday.

It's happened to me more times than I care to count.

Plus Dragon Quest XI is also out this week.

The reviews are... pretty favorable. 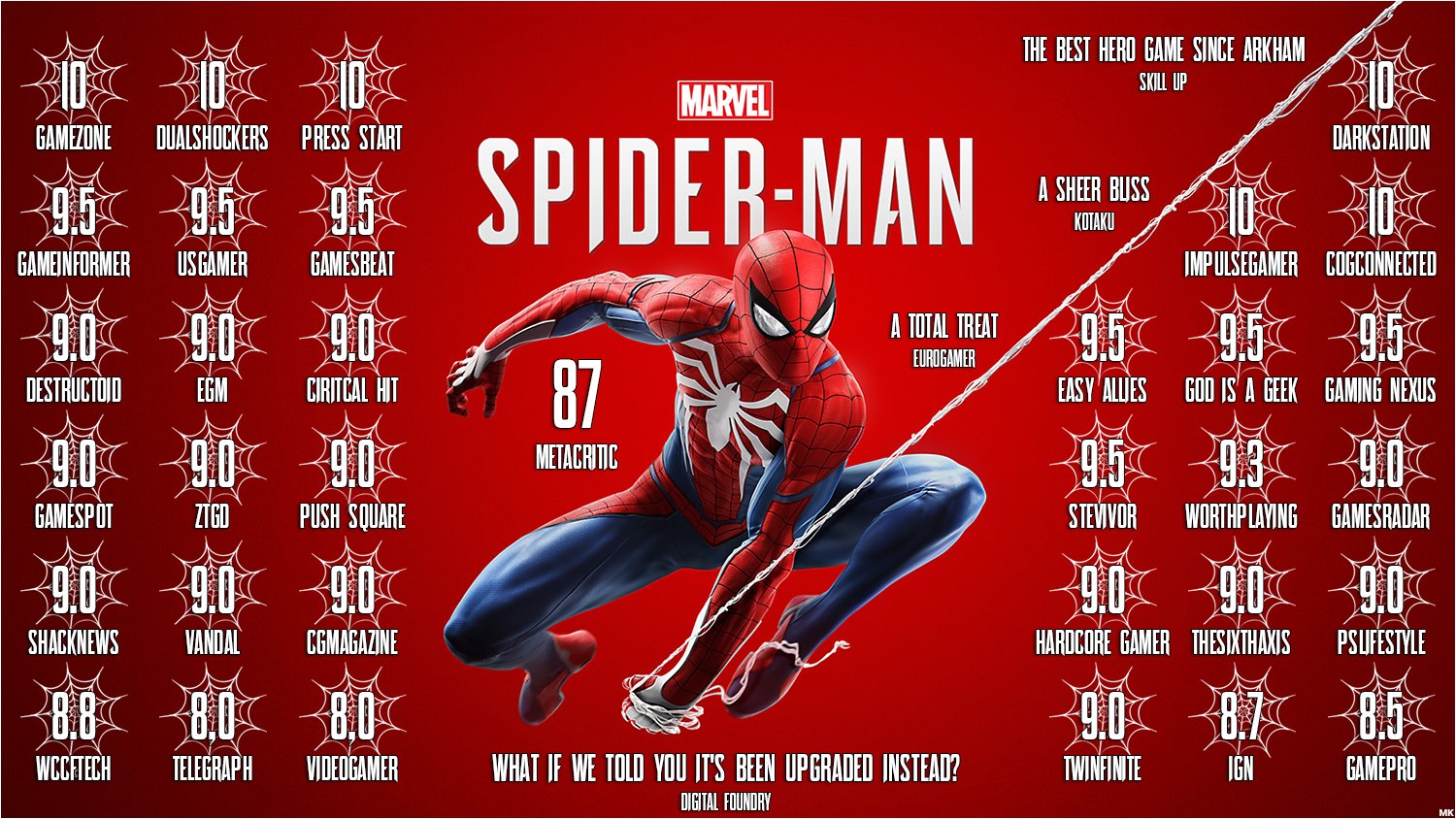 Any news on midnight releases?

Those review scores don't really tell me much because the Batman games got similar scores and those games were all monotonous to me after a certain point. Interested to see what the consensus is after the hype dies down in a few months
Sep 5th, 2018 4:15 pm

I'm out in the Maritimes, so the fact it hasn't shipped yet is a worry for me since Prime gives me 2 day shipping at best. Still says arriving Friday though, and my card has the pending charge.

The controller on the PS4 Pro bundle looks nice. Glad I ordered it in time. Only ordered it because I wanted a PS4 Pro and most stores seemed to be sold out.
Sep 6th, 2018 7:45 am


Ascott wrote: ↑ Yeah, but DQXI is reviewing even better and I already bought that, so...

Is it? It looks like both games are pretty critically even

What makes this any different than any other Spider-Man game released in the past decade or so?

I can recall playing the games on PS2 and swinging around town and thinking how great this was. Until a couple of games later it got to be mundane.

Anybody's Amazon copy get shipped out yet?

You would think I'd learn by now not to preorder with them, but nope. I don't! Says "Shipping now" and has since noon. I have been billed, which is good news. Odds are they shipped it out and haven't even bothered to update the tracking at all... Or they're shipping it late tonight and going to overnight it.
Reply to Thread
Back to top
Top