Be mindful folks, whatever knockoff you buy, don't buy one with a cushion seat (instead of a mesh).

It's scientifically proven that cushions absorb aromas from your rear scent infuser. Mesh seats and aerated gel cushions are where it's at in 2019.

orianna wrote: ↑ Everyone says this.. i disagree. I use one at work. For $1,000 dollars, it's not worth it. Don't get me wrong, it's comfy but not the greatest thing since sliced bread.

These chairs are a fraction of the price. It's like compare a honda to BMW. Yes it's better but is the value worth it. This is Redflagdeals, i'm sure most people aren't spending 1,000 on an office chair.

orianna wrote: ↑ Everyone says this.. i disagree. I use one at work. For $1,000 dollars, it's not worth it. Don't get me wrong, it's comfy but not the greatest thing since sliced bread.

These chairs are a fraction of the price. It's like compare a honda to BMW. Yes it's better but is the value worth it. This is Redflagdeals, i'm sure most people aren't spending 1,000 on an office chair.

If you play your cards right, you can get one for cheap. I got a Herman Miller for > $100 on Kijiji recently.

Victoreezy wrote: ↑ If you play your cards right, you can get one for cheap. I got a Herman Miller for > $100 on Kijiji recently.

Just gotta keep your eye out.

If you're looking for a cheaper alternative. Free shipping. 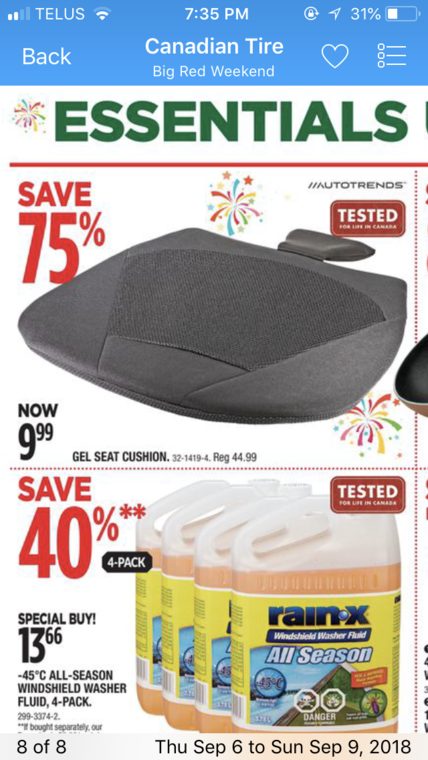 tdotflame wrote: ↑ how are these? Are they worth picking up for $14

A year later, mine is still going strong.

Bought it at $200 a few days back, and not a single regret. I love it. I couldn't wait for the price to drop to $150 because my crappy gaming chair's back was way too tilted back, giving me backaches. The Hyken's back can be set at 90 degrees and adjusted incrementally with the knob. Working on it, with a nice straight posture is such a joy. Makes typing so much better. Totally recommend it. Hopefully, it lasts. Worth it, even at $200. But I will check back in a few months to let you know. So far, it's as good as people are saying.
Last edited by thelasthunter on Mar 20th, 2019 2:16 am, edited 2 times in total.

I bought this seat in the summer, and I found that because the seat is molded into a butt shape instead of just being flat, the right and left sides of the hard seat plastic seat itself actually dug into my butt muscles, and was giving me piriformis syndrome and constant nerve pain. So if your ass is too big or not contoured to that shape, I'd not advise this chair. Stopped using the chair and my pain went away. Gave it to my mom who likes it though.
Mar 20th, 2019 8:19 am

Thanks OP, I bought one two days ago, significant improvement over what I had before and instantly addressed some lower back pain I was having through poor posture with the other chair. I am in the process of building 4 desks so the whole family can work at the same time in the home office and so I will almost certainly buy another three of these chairs if/when the price comes down to $150.

I bought this chair a few months ago after everyone seemed to keep hyping it up.

As someone that spends 8+ hours a day at a desk, this chair is terrible. If you spend a few hours a day in the chair, do yourself a favour and buy a Steelcase Leap V2 (you can find them refurbished for $350-$400). It is absolutely worth the few extra hundred, without question.

My problems with hyken:
- Lumbar support doesn't have enough cushion, eventually the cushion it has gets worn down, and it starts digging into your back which hurts.
- Lumbar support isn't adjustable enough, hard to get positioning right.
- Seat and back mesh starts sagging eventually, not a lot, but enough to notice. Because the seat sags but the front of the seat (frame part) doesn't, you start feeling a slight loss of circulation.
- Head rest barely has any adjustability, hard to get it just right. I was constantly fiddling with the damn headrest, so much so that I said screw it, and took it off.
- Arms also don't have enough adjustability. If you're tall you might be okay, but for me they didn't go down enough. They are also lacking depth and width adjustability all together. I also ended up taking these off.
- Seat could really use depth adjustability.
- Back has the option to lean back, however, the lean stopper doesn't work. You can't just stop the lean and "freeze" it at whatever angle you want, because the locking mechanism is shit.


If you have questions about the hyken or steelcase leap v2, feel free to ask me. I've used both those chairs for long periods.
Mar 20th, 2019 5:04 pm

EdwardS050 wrote: ↑ I will only buy chairs from Costco. I don't have time or patience dealing with Staples when the chair starts falling apart within a year.

My dad was looking for a replacement desk chair, and we stopped by Staples and perused around the offering. We saw some interesting-looking La-Z-Boy, but decided to shop around further. On the way out we saw some of the very same La-Z-Boy chairs at the return, kind of half-disintegrated & very little apparent wear.
UH OH !
Reply to Thread
Back to top
Top