Just sharing the word and for y’all that want to dislike the post for no reason stay salty. SMH

Edit; make sure you guys and gals that are trying to get one make a account on the source website and register your shipping/billing address. Also make sure you’re paying with PayPal it’s the quickest way to checkout.
Last edited by Prodigy94 on Jan 24th, 2021 12:16 pm, edited 3 times in total.
Share:
343 replies
Jan 24th, 2021 12:13 pm

Source by chance on where you heard it from?

Hippylove wrote: ↑ Source by chance on where you heard it from?

They sent an email.

Nothing to see here though everyone...there is only a limited number in stock so I’ll buy the one unit they will have thanks.

Isn’t there a big ps5 discussion thread that this would make a lot more sense in?

If you don’t want to use PayPal, use something like LastPass that can prefill the form for you with your cc info
Jan 24th, 2021 12:59 pm

Yeah it's really time to stop posting these threads every time one of these "releases" gets announced. There's a laughably low "success rate" as-is and the more publicly known these are the less of a chance any individual person has of even getting one.

Also at this point you can't even say "Better than paying scalper prices!" because anyone who hasn't paid a scalper for one yet isn't going to ever. 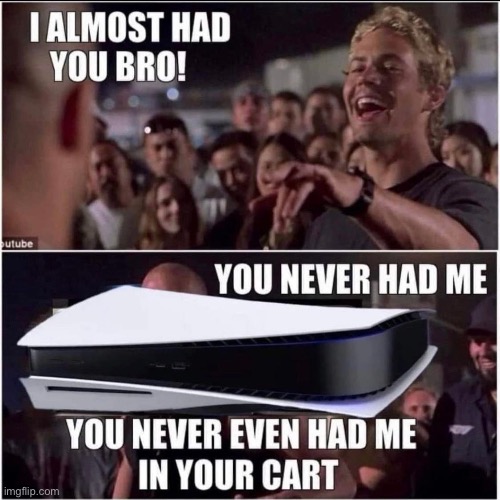 Angultra wrote: ↑ Wait until later this year when the next-gen update is out (among other patches), will have a better time.

Angultra wrote: ↑ Wait until later this year when the next-gen update is out (among other patches), will have a better time.


(I'm merely mocking all the people who post crap in anything Apple related in Hot Deals because it's not discounted at 50% or more, and don't show the same energy in threads like this when it's the same thing). This forum has really gone to shit since I've been here (15+ years, this is a new account, don't know my old info) and it's sad that mods haven't been issuing bans

Thanks OP for the awareness. Hope they land into the hands of people that want it and not scalpers.


I didn’t think shoppers or Costco actually had a drop.

Costco was a glitch from what I understand and unless I’m mistaken shoppers didn’t have a drop, just a couple of random stores that had preordered stock that wasn’t picked up that finally got redistributed from what I was told.

I mean everyone ripping on OP here for posting this but shit man, OP you’re a nice dude. I wouldn’t post this and give people a heads up so they compete to buy my ps5.

Thanks OP, if my order goes through for 2 I’ll sell you one.

1 hour on-hold call just to be told to go to the store and try to get a store to do an exchange (which already won't happen because every unit sent to stores was already a pre-order pick up). Made another 1 hour on-hold call asking to get a refund on the difference of the disc and digital versions was pointless, was told to send in the original console for a full refund since they wont send me the correct unit because all their inventory was already called for, and no stock was guaranteed for at least 2 months

Went to a store, pleaded my case to the manager on the floor at the time, and as expected an exchange was impossible, but out of the goodness of their heart (he actually helped), he contacted corporate was able to get them to refund me the difference of the Disc and Digital back to my credit card, but it took 2 weeks after this purchase for them to even do something

This is as I said a one off, but don't expect anyone to help you if something goes wrong. The manager that helped me (don't expect the same service at all locations) also told me there was no guarantee talking to corporate would get anything done, and they suggested I just take a full refund from the contact Center (their retail channels are different from the contact center, which is warehouse stock)