Torstar to be taken private - Is the Toronto Star toast?

Five families that built and grew media conglomerate Torstar Corp. have agreed to hand the newspapers they presided over for roughly 70 years to a Canadian investment firm that plans to take the company private.

The owner of the Toronto Star and other community newspapers revealed Tuesday evening that it reached a $52-million acquisition deal with NordStar Capital LP, a firm run by businessmen Paul Rivett and Jordan Bitove.

So now every news organization in the country with the exception of the CBC is owned by hard-right ideologues who want to control the media to spread their propaganda
May 28th, 2020 10:38 am

I like the Star investigation pieces, but understand this is costly journalism.
May 28th, 2020 10:39 am

Whenever you see reference to the CTF remember that 99.9999% of Canadian taxpayers cannot sign up to be members of the CTF.

It is referred to as an “AstroTurf” organization. It “looks like” a grassroots organization like grass, but, like AstroTurf, it is actually artificial, not being what it pretends to be.

The CTF is a private club that has only five members. Those five members decide who will replace them as members. A spokesperson once “defended” this model saying,


“The truth is that we sometimes have four, sometimes six and currently we have five. According to our bylaws we can have as few as three and as many as 20."

Fortunately there are some alternative, subscriber supported media in Canada. The National Observer, Tyee, and Narwhal are examples.

https://www.nationalobserver.com/
https://thetyee.ca/
https://thenarwhal.ca/
"It is difficult to get a man to understand something when his salary depends on his not understanding it." Upton Sinclair

Barely read the Star. Mainly scan it's headlines. Once in a while there's a decent piece published, but that's few and far between.

Really hard to survive in this digital environment. Not sure how they've managed to hold on for so long.
May 28th, 2020 12:08 pm

Whenever all current national newspapers go out of commission is still not soon enough. They should have all shutdown 10 years ago! Toronto Star in particular is such anti-Canadian media and their "journalists" like Shree, Rosie and Bruce are no better than blog writers. The first one on the list is a troll. Whoever run that organization is a complete moron thinking with divisive figures like those they can make money as a public business. One thing you do not want in business is someone so controversial and divisive like those. Hopefully their new owners strip them down to the bones, such a disgraceful news outlet!
May 28th, 2020 4:44 pm

CheapScotch wrote: ↑ Would you consider the Globe and Mail to be "hard right"?

I think the Toronto Star is a decent paper and would certainly consider it having left-wing politics. I agree with some stances they take and disagree with some. The exception is Shree Paradkar (Race & Gender Columnist); I hate that gasbag. Anyway, I think categorizing the Globe as "hard right" is unfair and equivalent to labeling The Star as "Antifa-left" - it just ain't so. No mainstream printed media is "hard right" like Rebel Media, in my opinion.
May 28th, 2020 5:18 pm

Damn that liberal media! Looks like RFD can finally show its support with Toronto Star now. 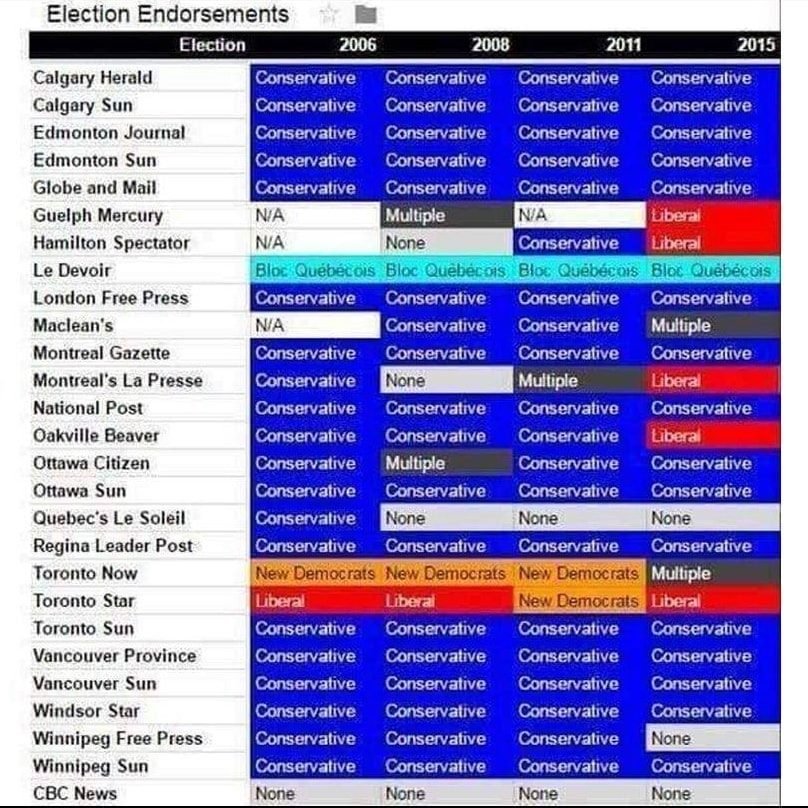 Jordan bitove is somewhat of a rookie in this size of business..the family has deep pockets but arent the most ethical..
it will be interesting to see the direction the paper goes as the family has always been die hard cons (dad was Mulroneys chief fundraiser)
Reply to Thread
Back to top
Top