Rotate image Save Cancel
Breaking news: See More
Sorry, this offer has expired. Set up a deal alert and get notified of future deals like this. Add a Deal Alert
Aug 19th, 2021 7:06 pm

5dark wrote: ↑ What are better hose suggestions from your experience?

Real Rubber Hoses... beware of the marketing that uses the word Rubber to market it, and then in fine print somewhere, it says something along the lines of Rubber composite, or rubber synthetic...

I'm wary of anything else that is NOT rubber.

Another thing is if you physically need to move the hose, I'm a huge fan of expandable hoses like Xhose and similar. Don't expect them to last a long time though. Rubber hoses are heavy and I have a few around the house that have a permanent home in their reel, and if I need more than 1 hose (kids playing with more than 1 sprinkler/water toy for example), the second hose I always bring out is the expandable ones. Light and easy to move around. I highly recommend both!

SomeGuyNamedBob wrote: ↑ I bought these last year and so far haven't had too many issues. One thing to keep in mind is that it's very hard to repair these because they have an internal stiffening ridge, which means the inside is not perfectly round. So when you try to use those hose repair kits they can't form a perfect seal and it ends up leaking. They sell this stiffening ridge as a feature (it kinda makes the hose "kink free") but the inability to repair means extra garbage heading to the landfill and they get us to spend more money on their crap

The in-law has a similar hose for the side of the house (one she doesn't use much). It started leaking after the first year, and I tried all sorts of repair adapters (regular brass one with hose clamp, the brass ones with the 2 metal screwable sides, and a compression style. The only one that works, with no links is the compression style one. Clean straight cut on the hose, nib off the inside stiffening ridge for about 1" using scissors or flush wire cutters, and then use the compression style repair ends. They were the only ones that worked. All other styles leaked, no matter what I did. Not the prettiest repair pieces, but they work at least.

I have a solid black rubber hose, and I've had it for over 20yrs, and it has been left outdoors winter & summer. and never had an issue with it. Still has the original brass fitting on it, and no leaks. 50' rubber hose cost me close to $100 20yrs ago, but well worth it. After 20yrs, I can only now start to see a little bulging on one end, so next year I will probably need to cut and replace one end. 20 yrs later, I'm good with that. I hate cheap stiff, kinking hoses. Not even worth the headaches and how uncomfortable they are.
Aug 20th, 2021 2:02 am

I need a 100' hose, saw this one sale a couple weeks ago from a different post, and decided against it, reviews everywhere (not just Walmart are really bad)

That said, it's probably good for a couple years maybe? Good deal for those that get it and have no issues.

last few years I have seen similar ones for $16 or so. Same walmart. I guess they have lots of stock left and getting rid of it.
But Thanks OP.
Tried new coffee and doughnut. Found same old stale thing. expected bill of six bucks but it was 600 million. Big mistake so the guy said don't worry it is on the house. going back to McD.
Aug 23rd, 2021 12:42 am

MafiaHitman wrote: ↑ I need a 100' hose, saw this one sale a couple weeks ago from a different post, and decided against it, reviews everywhere (not just Walmart are really bad)

That said, it's probably good for a couple years maybe? Good deal for those that get it and have no issues.

[Edit]Damn I forgot to post on my 20th anniversary 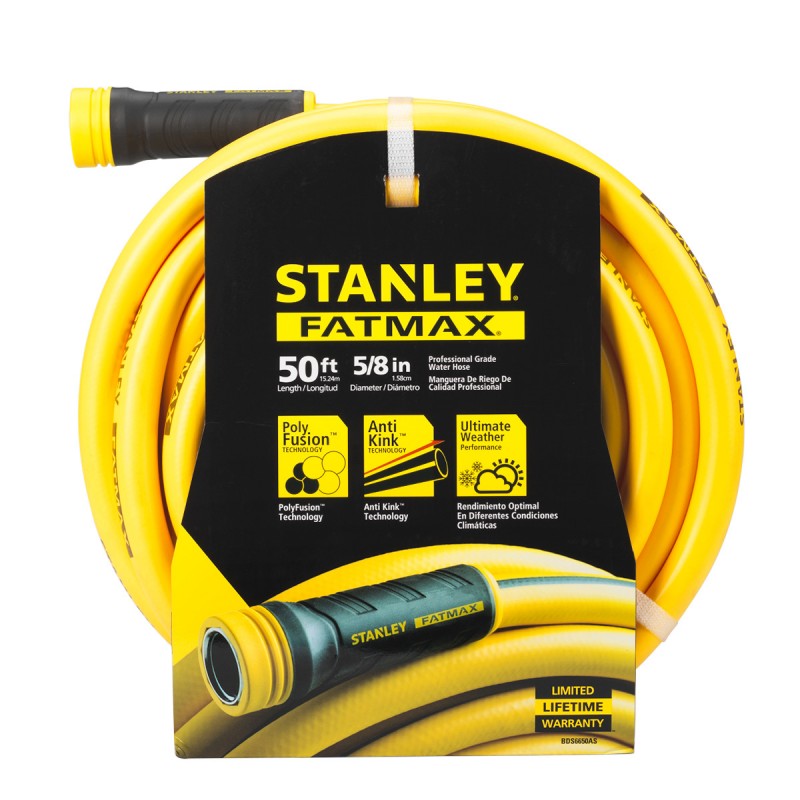 Yes, we buy more than 100 this Stanley Fatmax hose from Home Depot. Many have worked well in construction and pressure wash. We buy 50' & 100'. I not recommend this if we not use.


For in building, we use Green Line or New Line hose. We still replace because trades damage.


We also buy the Miracle Gro because it cheap and it work ok for shop use. We not coil, but leave out.


Boss not allow us to buy "rubber" hose because it leave mark on concrete and when rub against building.
Rubber is soft and makes everything dirty. That is why you find many industrial hose not rubber anymore. Buy rubber if you like but if pull on hard area, you leave mark. Our customer will not like marks.

Was looking to get more hoses to build my irrigation system since the costco flextreme one is sold out at my local store.

Like Emporium said, you can install new fittings if you use a flush cutter to cutter the inner spine out. I used the gilmour plastic compression fitting and it works great. no leaks so far and doesn't rust if I leave in on the dirt.

Having said that, I would hate to use this or the costco one as a hand held hose since it is so damn rigid, especially if you don't have a reel.

MikuGirl wrote: ↑ Yes, we buy more than 100 this Stanley Fatmax hose from Home Depot. Many have worked well in construction and pressure wash. We buy 50' & 100'. I not recommend this if we not use.

So what is the failure rate based on buying over a hundred samples of this hose? For a contractor, they afford to replace and swap out if it is cheap enough. For homeowners with metered water, it can get expensive if the ends burst when the hose is under pressure and unattended. Different use cases warrant different quality requirements.
Aug 26th, 2021 2:30 pm

This Walmart hose was a good deal for 12$ but it leaks at the connector. Had to return mine unfortunately.

I bought this one from Princess Auto couple of weeks ago and although not on sale its been good so far.
Aug 26th, 2021 3:14 pm

Just checking out Canadian Tire for hoses and wondering if this is a good hose?


I had a hose from Canadian Tire IDK maybe 10-12yrs ago and back then it was a dark green with a I think dull yellow line in the middle of the hose. That hosed lasted around 7yrs I would think before needing repairs. My old hose was stored outside all the time and often laid out on the lawn to water the lawn/garden and most times the water tap was on when the hose was not in use. I ALWAYS drain my hoses before each winter so I know the hoses are not getting freeze burst damage to the hose or the connectors.

I am looking for hose with the following requirements:

1. That can be stored outside on a hose holder all year long


I would like something that can have at least 5-7yrs trouble free for $50 or less if possible. I recall I paid something like $35 for my hose back then on sale.
...Location: GTA North
If this post has helped you please click the 'THANKS' button.
GTA Grocery Highlights (updated weekly) thread
[WTB] Looking for a Netbook for $150 or under (~$100)
Sep 24th, 2021 6:38 pm

After many years of different hoses (including rubber) I’ll never buy another brand than flexzilla.
Sep 24th, 2021 6:45 pm

Maybe you could use this hose as a grappling hook.

This is not financial advice.
Outlaw ellipses and apostrophes.
Reply to Thread
Back to top
Top