Why are there people on the KETO diet in here. This isn't diet for by all means. Keto diet is a scham and it sure as hell isn't sustainable.
Taking cottage cheese pancakes (LOL) with you to wendys defeats the purpose of dieting.

No traditional culture has ever lived on a keto diet and none ever will.

WL1980 wrote: ↑ I thought keto is all about healthy fats like nuts and avocado.

Keto is about maintaining a state of low carb so your body produces ketones. It promotes healthier fats when you add fat to something. The reason being is that excessive omega 6 can cause an inflammatory response while omega 3 can reduce it. That being said how strict someone is can vary.
The most strict keto would be a diet of around 85% fat, 10% protein, and less than 5% carbs.

The biggest de-railer in keto I've seen it when people start justifying more carbs, or artificial sugars.
The reason keto works so well is because when you are strict you are keeping your insulin levels low. Insulin can create a feeling of hunger in the body which can be spiked my such things as sugar, exercise (this case makes sense to recover), etc. So after eliminating most sugars the body is more able to keep hunger in check and eat only what's necessary while burning excess fat.

Some studies have found articial sugars can increase insulin as well. So just consuming even artificial sugars that add almost no calories can de-rail some diets due to an increased level of hunger that lead to a higher consumption of even keto friendly foods.

There have been cases of people who literally eat only bacon and shed weight. Surprisingly bacon can be useful due to it's high fat content, it is loaded with sodium so dieters don't get dehydrated, etc. But of course there's loads of nitrites in it. So it may not be the healthiest of ways to lose weight but it can work. In the long term what's worse? Being significantly overweight for decades, or binging on bacon for a few months?

So I think the act of actually avoiding sugars, both calorie loaded, and artificial is important in maintaining continued weight loss and/or health on keto. Much more so than going 100% strict. So long as a specific ratio is maintained in what someone eats.


But someone who does maintain a 100% strict diet will likely experience better results as long as they can maintain that.
Remember though it's not a race. It's a marathon. So some who go 100% strict may be more likely to give up simply due to all the restrictions in place. While someone who followed something mostly in line with more flexibility may be in it more for the long run. It all depends on the person.
But regardless on what someone does during the diet once they end the diet they may regain weight back if they return to the eating habits they had before.

SmokinbluntZ wrote: ↑All this talk of keto-this and keto-that is complete nonsense. If you think eating this burger with a lettuce wrap instead of the bun makes it any healthier, you’re deluding yourself.

Actually you've completely missed the point of the diet. The point is to essentially shift the body to burning fat for energy as opposed to sugar. In addition it minimizes insulin production. Insulin can contribute to excess hunger. So following the diet actually keeps the body in a state of ketosis so when there isn't any energy to burn from your stomache it burns fat from your body.

Someone not following a ketosis diet has a significant portion of sugar stored in their muscles as glycogen. This is normally used first in exercise, and during a calorie deficit. So to lose significant fat without Keto requires burning that sugar and then fat afterwards.

So the combination of lowered hunger from a low blood insulin level, and the body shifting to burning fat works well for many people. Esspecially when combined with intermittent fasting.

CanKon wrote: ↑Why are there people on the KETO diet in here. This isn't diet for by all means. Keto diet is a scham and it sure as hell isn't sustainable.
Taking cottage cheese pancakes (LOL) with you to wendys defeats the purpose of dieting.

No traditional culture has ever lived on a keto diet and none ever will.

As much of a sham as you spelling it "scham"? Also you think traditional cultures lived on highly processed foods loaded with sugars, and artificial flavors? The diet is efficient and had worked for many people. But regardless of diet once someone discontinues a diet they may regain weight if they return to negative eating habits they may have had before. Doesn't matter what diet they used before.

It is pretty low. That is essentially what was used in the original cases to treat epilepsy patients before this diet was adapted for mainstream usage. It could help prevent seizures for some patients. They were kept to essentially a minimal amount of protein to survive. It was closely monitored by doctors. The reason the ratio was kept as low as it was is that when the body is lacking sugars it can actually convert excess protein into carbohydrates. So if someone were to say follow 50% fat, 45% protein and 5% carb it would potentially fail for that reason. It is meant to have a high proportion of fat for a reason. Most strict dieters on a current keto diet ussually are closer to 15%-25% because 10% was so low and would require more careful monitoring. The exact percent reccomended can vary based on muscle mass, exercise, etc.

redflagdealsguy wrote: ↑ The student has exceeded the teacher.

How did you get 'cottage cheese pancakes' from Wendy's.... that looks like it was cooked with wheat-based batter.

had a baconator for lunch with spicy wraps on the sides, guess im gonna have to go for round 2 for dinner

I just destroyed 2 baconators for dinner. It was glorious!
“You miss 100% of the shots you don’t take. -Wayne Gretzky"
- Michael Scott

Had one at 2pm and am itching to get another right now for my late dinner! This is horrible and I'm a fitness trainer too

LuxErus wrote: ↑ I'm not sure of what I'm missing. I don't understand how home-made burgers would be sliders. They actually tend to be much bigger than anything from fast food joints and their thin patties.

I would need at least 3 baconators to be full; they look so miserable in real life (unlike the pictures).


That last picture was real life and that's how they look. Okay Ronald, go back to your arches.

Zephyr22b wrote: ↑ I just destroyed 2 baconators for dinner. It was glorious!

You are a monster. I had one just now and I don't even think I could make it through half a second one.

These are delicious but why are they so greasy? It has been a couple years since I've had a baconator but I don't remember them being so greasy before.
May 9th, 2019 10:24 pm

kimwoobingsu wrote: ↑ A $5 baconator for the first day of Ramadan, astaghfirullah.


Not intended to be a political comment or anything, the timing is just funny

I read this comment couple days ago...had to Google what Ramadan was, didn't think anything of it til it hit me today the whole muslin bacon thing, I've been laughing ever since!
May 9th, 2019 10:30 pm 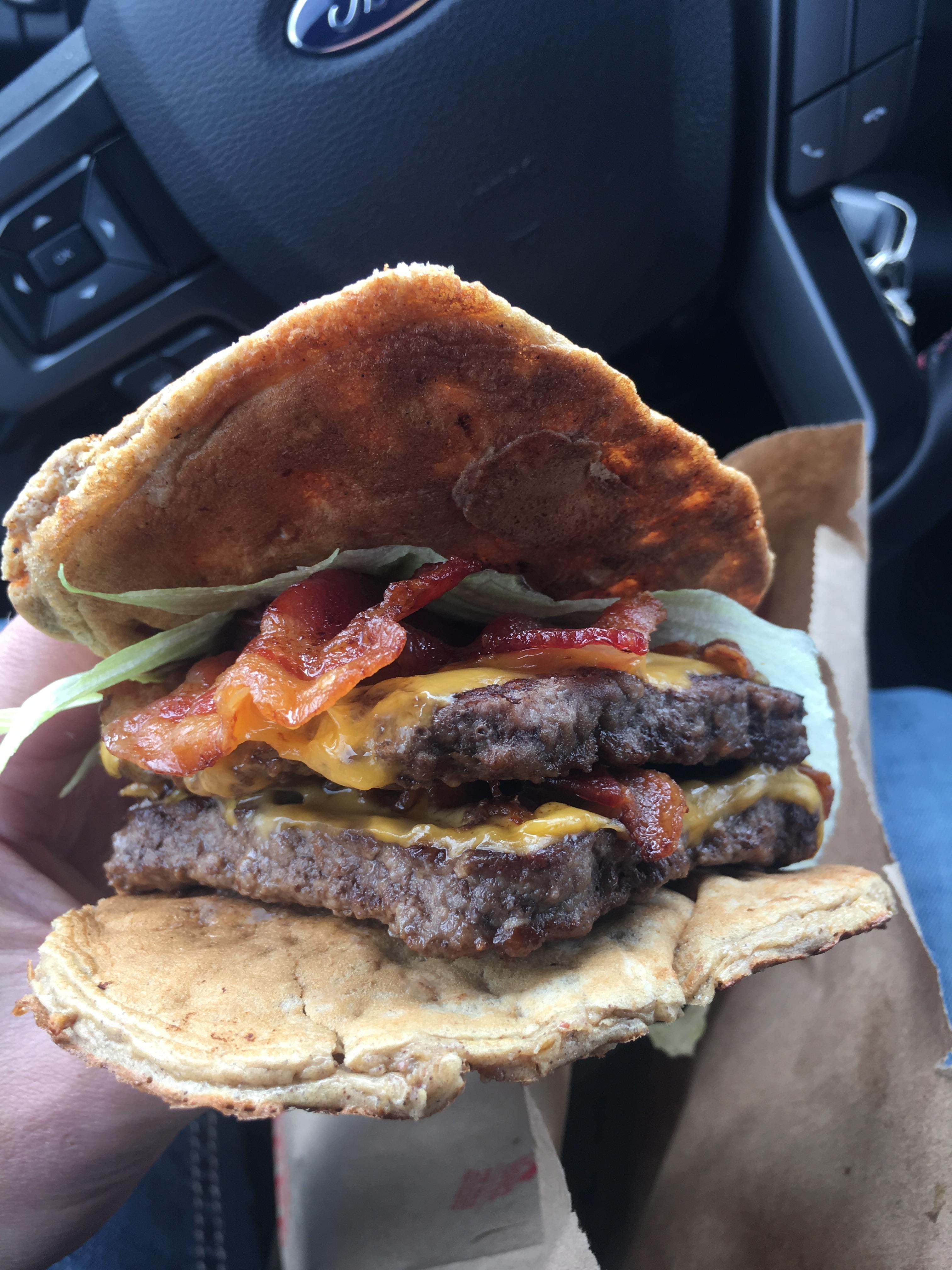